SW corner of King and High Sts. Dedicated in 1908, this structure became the second church for the Lutheran congregation. The church bell, dating from 1879, was brought from the first church and installed in the tower. An escutcheon made by local locksmith Michael Rickard in 1795 also was transferred from the old building and placed on the tower door, where it remains today.

St. Peter's Lutheran Church is located at the SW corner of King and High Street. 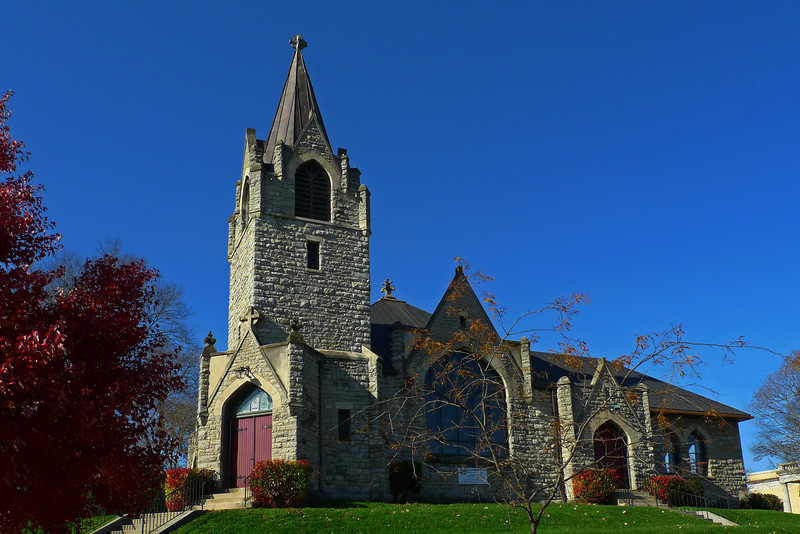 Saint Peter’s Lutheran Church was built in 1906. The building is a gothic structure with a massive tower, made of blue limestone, hand dug from a quarry on C. S. Wysong’s farm on Moler Road and Ohio granite trimmings. Charlie Jones and his sons completed the masonry work, while A. S. Link did the carpentry.  The church contains three glass windows that picture the appearance of the angel to the shepherds in the field, the Madonna and child in the stable and behind the altar, the third depicts, Christ in the Garden of Gethsemane.

The Evangelical Lutheran Church of Shepherdstown was officially established in 1765, after the founding of Mecklenburg (today Shepherdstown). Six men founded the church, one being Martin Endler, the first in the line of Entlers. The first church was located next to the railroad tracks, on German Street. Pastors often served many churches in northern Virginia and southern Maryland because they were in short supply. The first pastor for the church was Reverend Mr. Bauer in 1766, but he was not a Lutheran pastor. He was a Christ Reformed Church pastor and also preached for the Lutheran Church.

The second Lutheran pastor was Carl Wilbahn from Germany, because the German citizens “were unwilling to join the English Church” (From the Journals of Henry Melchoir Muhlenberg, vol. 2). During the Civil War, the town became a hospital after the Battle of Antietam and the Lutheran Choir sang at the burials of those lost after the Battle. After the war, the church remodeled to add an addition and a basement. The church installed a pipe organ shortly after the renovation.

The location of the church became an issue, many members wanted to move. The railroad tracks provided a safety concern for children crossing the tracks, as well as an irritating train schedule. The Norfolk and Western train passed by on Sunday right during the pastor’s sermon. So the Ladies Aid Society began raising the money and bought the current lot on King and High Street. They laid the corner stone on November 10, 1906, and the church officially moved in July 1908.