The girlhood home of Carrie Lane Chapman Catt; suffragist, founder of the League of Women Voters and activist in the cause for world peace. The site, located on 10 acres, includes a museum and an interpretive/education center. 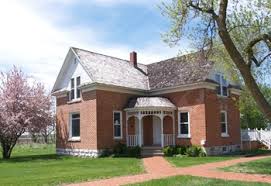 Key coordinator of the woman suffrage movement and skillful political strategist, Carrie (Lane) Chapman Catt revitalized the National American Woman Suffrage Association (NAWSA) and played a leading role in its successful campaign to win voting rights for women. In 1920 she founded the League of Women Voters upon ratification of the Nineteenth Amendment to the U.S. Constitution.

Carrie Clinton Lane was born on January 9, 1859, in Ripon, Wisconsin, the second of three children of Lucius and Maria (Clinton) Lane. At the age of seven, her family moved to rural Charles City, Iowa, where she graduated from high school in 1877. In 1880, she graduated from the Iowa Agricultural College and Model Farm in Ames (now Iowa State University) at the top of her class, having worked her way through school by washing dishes, working in the school library, and teaching. She was also the only woman in her graduating class. After college, she returned to Charles City to work as a law clerk and, in nearby Mason City, as a school teacher and a principal. In 1883, she became one of the first women in the nation appointed superintendent of schools.

In February 1885, Lane married Leo Chapman, editor and publisher of the Mason City Republican, in a wedding ceremony at her parents' rural Charles City home. Mr. Chapman died of typhoid fever the following year in San Francisco, California, where he had gone to seek new employment. Arriving a few days after her husband's death, the young widow decided to remain in San Francisco, where she was employed by a newspaper during part of that time. In 1887, she returned to Charles City and joined the Iowa Woman Suffrage Association for whom she worked as a professional writer and lecturer. After a short period of time, she became the group's recording secretary. From 1890 to 1892, she served as the Iowa association's state organizer.

At the time of Carrie Chapman's rise to her state organization's highest office, in June 1890, she married George Catt, a fellow Iowa Agricultural College alumnus she had met during her stay in San Francisco who encouraged her suffrage activity. Mrs. Catt also began work nationally for the National American Woman Suffrage Association, speaking in 1890 at its Washington, D.C., convention. In the following months, Catt's work, and her writing and speaking engagements, established her reputation as a leading suffragist. In 1892, she was asked by Susan B. Anthony to address Congress on the proposed suffrage amendment. In 1900, she succeeded Anthony as NAWSA president. From then on, her time was spent primarily in speechmaking, planning campaigns, organizing women, and gaining political experience.

In 1902, Catt helped organize the International Woman Suffrage Alliance (IWSA), which eventually incorporated sympathetic associations in 32 nations. In 1904, she resigned her NAWSA presidency in order to care for her ailing husband. His death in October 1905, followed by the deaths of Susan B. Anthony (February 1906), Catt's younger brother William (September 1907) and her mother (December 1907) left Catt grief-stricken. Her doctor and friends encouraged her to travel abroad; as a result, she spent much of the following eight years as IWSA president promoting equal-suffrage rights worldwide.

Catt returned to the United States in 1915 to resume the leadership of NAWSA, which had become badly divided under the leadership of Anna Howard Shaw. In 1916, at a NAWSA convention in Atlantic City, New Jersey, Catt unveiled her "Winning Plan" to campaign simultaneously for suffrage on both the state and federal levels, and to compromise for partial suffrage in the states resisting change. Under Catt's dynamic leadership, NAWSA won the backing of the U.S. House and Senate, as well as state support for the amendment's ratification. In 1917, New York passed a state woman suffrage referendum, and by 1918, President Woodrow Wilson was finally converted to the cause.

On August 26, 1920, the Nineteenth Amendment officially became part of the United States Constitution. One hundred forty-four years after U.S. independence, all women in the United States were at last guaranteed the right to vote.

Stepping down from the NAWSA presidency after its victory, Catt continued her work for equal suffrage, promoting education of the newly-enfranchised by founding the new League of Women Voters and serving as its honorary president for the rest of her life. In 1923, with Nettie Rogers Shuler, she published Woman Suffrage and Politics: The Inner Story of the Suffrage Movement. In her later years, Catt's interests broadened to include the causes of world peace and child labor. She founded the National Committee on the Cause and Cure of War in 1925, serving as its chair until 1932 and as honorary chair thereafter. She also supported the League of Nations and, later, the United Nations.

Honored and praised by countless institutions for her more than half-century of public service, Carrie Chapman Catt died of heart failure at her New Rochelle, New York, home on March 9, 1947. At Woodlawn Cemetery in the north Bronx, New York, she is buried alongside her longtime companion, Mary Garret Hay, a fellow New York state suffragist, with whom she lived for over 20 years.