Established in 1824, Second Baptist Church is the oldest black Baptist church in Columbus. This church was constructed in 1907 and expanded in the 1950s. 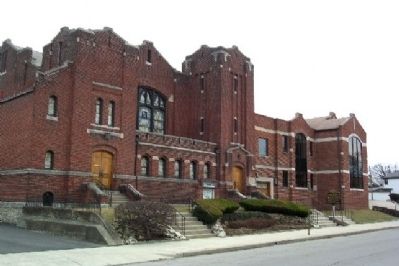 The congregation held services and meetings at various locations during the antebellum period. The church acquired a building at 69 Mulberry Street and in 1844, the state of Ohio granted Second Baptist a second charter. The congregation acquired land and broke ground for a new church at 115 East Gay Street.

In 1847, there was a split between members with the those favoring a stronger position against slavery creating the Anti- Slavery Baptist Church. The members of this church were more active in the Underground Railroad, although all opposed slavery. In 1848, Reverend Poindexter was appointed as pastor of the church. Second Baptist later invited members of the Anti-Slavery Baptist Church to rejoin their congregation.

Owing to the exclusion of African American children from the city schools, the church operated their own elementary school. That school closed in 1865 as the public school opened to children of all races. In 1881, Reverend Poindexter and Reverend Gladdon of the First Congressional Church sued the Columbus Public School System for their failure to abide by state laws that forbid exclusion of pupils owing to race. One year later, Reverend Poindexter was elected to the board of education in the Columbus Public system.