At the entrance to the Emil A. Blackmore Museum, visitors are greeted by mannequins displaying military uniforms across the services and through the decades. 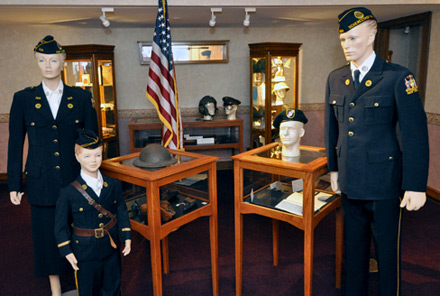 Delegates at the first convention of the American Legion in early 1919 empowered the national executive committee of the organization to "make suitable provision for the collection of war photographs, equipment and such other paraphernalia of war as would preserve our knowledge of the Great War for all time.” During the early months of the legion's existence, small individual historic collections were housed at respective legion post cities (St. Louis, Minneapolis, Washington, D.C.) but after the establishment of Indianapolis, Indiana, as the national legion headquarters during the summer of 1919, historic legion items were migrated from post cities to Indianapolis. Not until the late 1960s was the current museum named for Emil A. Blackmore, national adjutant of the American Legion from 1953 until 1967.

Blackmore was born in Rawlins, Wyoming, attended public schools there, and was educated at the University of Wyoming. He served in the U.S. Navy from 1943 to 1946. For two years after his discharge he was the Veterans Administration Contact Officer and the Post Service Officer of the Travis Snow Post 5 of The American Legion at Torrington, Wyoming. He also served as chairman of the Wyoming Department’s Education of Orphans of Veterans and Child Welfare committees. In 1948 he became department service officer of the Wyoming American Legion, holding that office until he joined the American Legion national headquarters in 1953. In 1967, Rawlins suddenly and unexpectedly died of a heart attack after a day of work at the Indianapolis office.

Fond remembrances of Blackmore poured in to the legion's national headquarters. "We who have had the privilege of being closely associated with him knew him as a devoted and hard-working administrator who also took the time to share the concerns of his fellow workers. 'Blackie' was a rare individual possessed of special qualities. His kindness of character--his dedication to the Legion and to the cause of the veteran--his interest in and concern for his fellow workers-and the deep compassion he held for his less fortunate comrades, are qualities that will live on in the memory of all who knew him. The American Legion has suffered a great loss and we have lost a close personal friend in the passing of Mr. Blackmore." For Blackmore's long service to the legion headquarters, the museum was named in his honor in the late 1960s.

The Emil A. Blackmore Museum contains a vast collection of weapons of war, convention badges and award medals, military uniforms and gear, military service medals and personal decorations. The museum also offers exhibits with an educational (rather than just a display) component: dioramas depicting scenes from World War I, World War II, the Vietnam War, and the War on Terror; the original handwritten draft of the 1944 GI Bill of Rights; and more than 2,500 World War II and World War II posters reflecting how American society coped with being at war.

Monday--Friday 8am--4:30pm; closed on weekends and all federal holidays