This short elevated railway dates back to a private elevator that was established in the late 19th century for a Dubuque resident who wished to ease his daily commute. Today, the inclined railway takes passengers from Fourth Street to the top of this bluff overlooking the city. Fenelon Place Elevator claims to be the world's shortest and steepest railway. While the original owner's private railcar system was twice damaged by fires, local residents formed their own company in 1893 to operate the inclined railway. 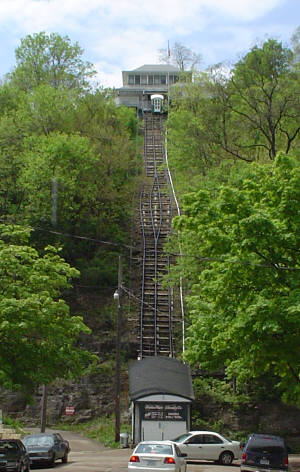 The Fenelon Place Elevator was originally constructed by J. K. Graves for personal use. He lived at the top of a bluff and was forced to deal with a half-hour drive via buggy from his house into town. This was incredibly inconvenient for him. He came up with the idea of building an elevator to ferry him up the bluff and back, but he had to petition for permission to build the car. His permission was finally granted on June 5th, 1882.

Graves hired local engineer John Bell to design the cable car. Bell's original design was powered by a coal-burning steam engine with a rope being used to pull the cart up and down the hill. Graves used the cart several times a day as part of his daily schedule. He would go down for the day, return for lunch and his nap, then return to work again before going up one last time in the evening. Because of how regularly he used the cart, some of his neighbors took to waiting near the car and asking for rides up and back.

Eventually, Graves' personal transportation system was destroyed by a fire, a result of the small fire that was regularly left burning in the boiler overnight spreading beyond its intended confines. One a particularly windy night, the gusts stoked the flames within the boiler and the small fire spread to the cart. Graves was able to rebuild the cart, but he soon decided to respond to the requests of his neighbors and he opened the elevator for public use following the reconstruction of his cart at a cost of five cents per ride.

In 1893, the cart burned was again destroyed by fire and this time, Graves decided against investing the funds to rebuild. This would have spelled the end of the incline, but it was no longer just Graves who relied on the cart. His neighbors who also lived on top of the hill relied on the incline and they were determined to rebuild.

With Graves' blessing, ten residents of the neighborhood overlooking Dubuque formed the Fenelon Place Elevator Company and constructed a more sturdy and modern elevator. Several of these men traveled to the 1893 Colombian Exposition to view many new engineering concepts and talk with designers. Some of the modern wonders on display at the exhibition utilized electricity, but this was still beyond the capacity of the local company as electricity was not yet put to commercial use in something as large as an inclined railroad system.

The second iteration of the elevator's design was an upgrade in comparison to the first, using more advanced technology. A car motor replaced the old coal-burning engine. The Fenelon Place Elevator Company corrected a flaw in the design. Each fire had burned the hemp ropes used to anchor the car. The old hemp rope was replaced with steel cables that would not burn in the event of a fire. The use of a car engine over coal and steam made the likelihood of a fire much lower. The safety of the cart had been drastically improved. Additionally, the introduction of more rails and a bypass, a second car was able to run alongside the first.

By 1912, most of the original owners of Fenelon Place Elevator Company had either passed away or moved away. C.B. Trewin was the only remaining member. Trewin went on to add many additional structures to the elevator, such as garages, and a small apartment atop one of the garages. The apartment was used for neighborhood men to meet and discuss management of the elevator, or simply goof around away from their families.

There was another electrical fire, but the damage was limited. Trewin upped the fair to ten cents a ride in response, possibly to compensate for a more thorough maintenance regimen. Closer to the modern day, the elevator was again rebuilt from scratch, complete with modern safety features and an even more efficient engine. With the introduction of cars, the drive downhill to the rest of Dubuque is a non-issue, so the cart is more of a historical attraction, rather than holding any practical use. Today, the fare is $3 per ride.