The Alex Haley Museum is dedicated to preserving the memory and work of Alex Haley. Haley's first contribution to history was with Playboy Magazine where he interviewed figures such as Malcolm X, Martin Luther King Jr., and Miles Davis. Two years later he completed "The Autobiography of Malcolm X: As told by Alex Haley" which was an international bestseller. Haley went on to write Roots, a historical television series about slavery. The Alex Haley Museum includes memorabilia from Haley's life as well as information about his legacy. The Interpretive Center continues to hold events for young writers. 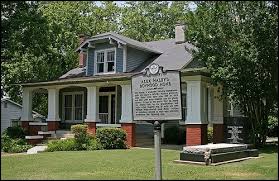 Alex Haley was a prominent writer that had incredible influence over the Civil Rights movement. Haley began his work as a freelance writer, gaining little notice for a few years. His first impact was with his articles for Playboy Magazine. This gave him the opportunity to interview figures in the Civil Rights movement as well as notable African American celebrities.

While interviewing Malcolm X, Haley asked if he would be able to write his life story. Once "The Autobiography of Malcolm X: As told by Alex Haley" was completed it launched Haley's career. The book was a bestseller and brought even greater awareness to the Civil Rights movement. Haley continued on to write the series Roots. This fictional series followed the stories of Africans who were brought to America as slaves and continued on their trail to freedom.

Haley had a significant impact on the Civil Rights movement. The Alex Haley Museum and Interpretive Center celebrates the work that Haley completed in his lifetime. The Museum includes artifacts and manuscripts from his writing days. The Museum also exhibits interviews that were done with Haley about his work.The Interpretive Center continues to be a place for writing events. Yearly writing contests are held to help creativity in young minds.

Monday – Closed Tuesday – Saturday: 10am to 5pm Sunday: By appointment only. Please call