The state historical land marker for the Battle of Georgia Landing located in Labadieville, Louisiana in Assumption Parish. The marker details the battle that occurred in the surrounding area on October 27, 1862. The Battle of Georgia Landing was part of the expedition launched by Union Major General Benjamin F. Butler in the Bayou Lafourche region. The battle resulted in a Union Victory for Butler's protege, the commanding Union Brigadier General Godfrey Weitzel, in which the Confederates lost 229 men and the Union lost 86.

This is a picture of the actual marker itself. It offers a brief summary of the battle. 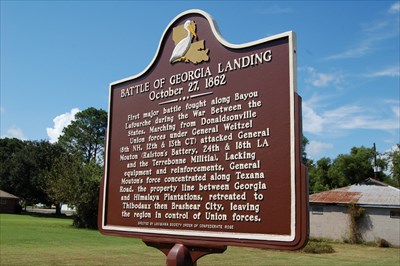 This is a map from the National Park Service displaying the profile of the battlefield location. 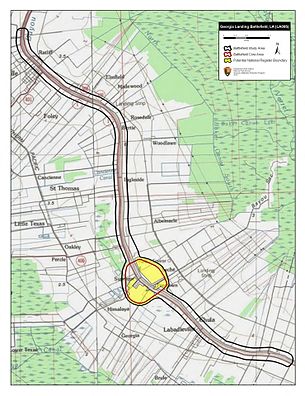 In October of 1862, Union Major General Benjamin F. Butler, commander of forces in the Department of the Gulf, ordered an expedition in the Bayou Lafourche region to eliminate any rebel threats.  He also aimed to claim any cotton and sugar products in the area for the Union and use the area as a future base for military operations.  He put his protege, Brigadier General Godfrey Weitzel, in charge of a brigade of 4,000 men he had organized to complete the mission.
On October 25 of 1862, Weitzel and his brigade arrived where the Lafourche meets the Mississippi River at Donaldsonville.  There he began to make an advancement up the east bank of the bayou.  Meanwhile, Confederate forces under the command of Brigadier General Alfred Mouton gathered in an attempt to confront the threat of Wietzel's forces.  By October 27, the Confederate forces had managed to occupy the area of the bayou north of Labadieville.  Slightly more than half of Mouton's forces had gathered themselves on the east bank while the rest of his men remained on the west bank near Georgia Landing.  The Confederate forces also lacked any means of gathering to one side or the other.
Around 11:00 AM, the Union troops encountered Confederate forces as they made their way down the east bank and a skirmish ensued.  The Confederates were immediately forced to fall back from their position.  Meanwhile, Weitzel began ordering some of his troops to the west bank to take on the other part of Mouton's force.  The Confederates rallied and were eventually able to bring the Union attack to a near standstill.  Unfortunately for the Confederates, they had also run out of artillery ammunition and were forced to retreat to Labadieville.  Weitzel's victory, in turn, opened up this portion of the Lafourche for Union control and would eventually lead to complete Union control of the entire Lafourche region.  Weitzel would also be awarded a brevet promotion to a Major in the Regular Army for his efforts at Georgia Landing.
The marker for the battle can be found in Labadieville, Louisiana in the Assumption Parish.  It is located at the intersection of State Highway 1 and State Highway 1011.  The marker is on the right side of the road when traveling south on State Highway 1.