Designed by architect firm Fridolin Heer & Son in the Beaux-Arts style, the Dubuque County Courthouse is one of the city's iconic landmarks. Still the seat of county government, it was built in 1891 to replace a large brick building constructed in 1841. It is most notable for its 190-foot high central tower that is capped with a 14-foot tall statue of Lady Justice. The building once had a number of other statues, but four of them—winged angels with trumpets—were melted down and turned into weapons during World War I. In the 1980s, gold leafing was added to the central dome, giving the building some of its distinctive look. It was added to the National Register of Historic Places in 1971. The adjacent building is the former county jail and is a National Historic Landmark (it is a separate Clio entry).

The Dubuque County Courthouse was built in 1891 and is listed on the National Register of Historic Places. 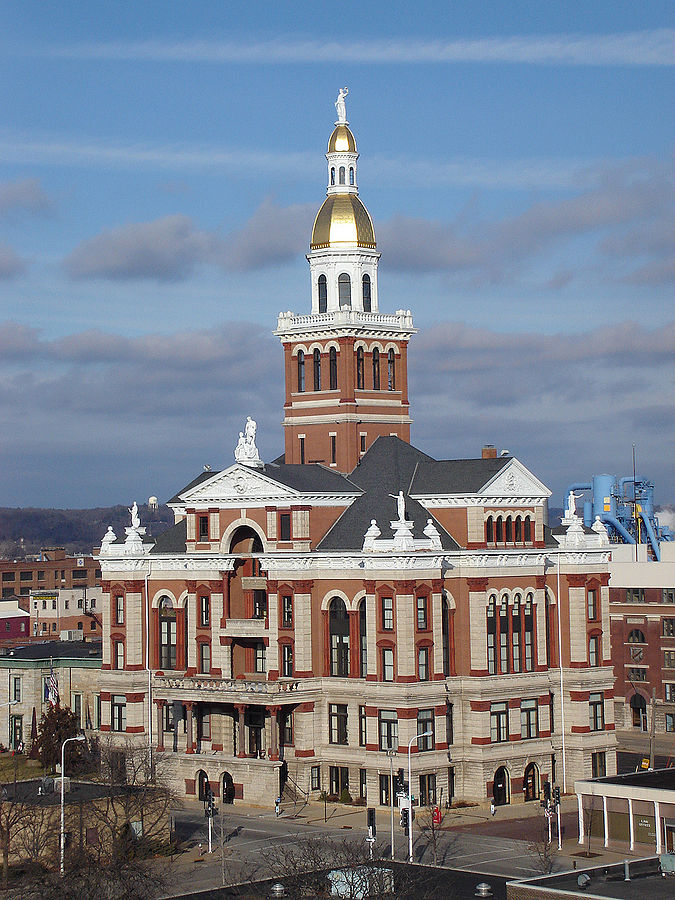 Soon after Dubuque was platted in 1836, the first building used to house county government functions was a log structure used as a church by Methodists. As stated above, the first purpose-built courthouse was erected in 1841; it is estimated that over 240,000 bricks were used. As the local population grew, the need for a new courthouse became apparent by the 1870s. However, construction for a new building was stymied by disagreements over where it would be built.

By 1890, the 1841 courthouse was falling into disrepair and the need for a new courthouse was urgent. The building was becoming unusable. Controversy surrounding the location and construction cost of the building continued, but efforts to complete the project went forward. The local government set aside a budget of $125,000 to fund the construction of the building. Initial attempts at securing someone to do the actual work of building the courthouse were unsuccessful. All offers were too expensive, until the contract was eventually passed to Albert Ney. This in turn drew more controversy. It seemed as if much of the funds given ended up going to individuals outside of Dubuque. However, this was not enough to stop the project. The current courthouse was successfully completed three years later.

The Dubuque County Courthouse is an example of Beaux Arts Architecture, a designation that helped eventually land it in the National Register of Historic Places. It was the first location in Dubuque to receive this designation. The architectural style of the building is widely agreed to be beautiful. The many bronze status that adorn the building add to its beauty. The largest of the statues is the fourteen foot tall statue of Lady Justice. The courthouse is missing four angel statues that were present at its initial construction. Those statues were sacrificed for the war effort during World War I, but the other statues remain.

Since then, the building has undergone a few changes and renovations. It was threatened with demolition in the 1960s to make way for a highway but locals protested and the plan was dropped by 1970. A chance encounter contributed to this decision. In 1958, artist and retired executive director of the Chicago Arts Club, Isabel F. Jarvis, who happened to be in the city at the time, sketched the courthouse. The sketch was eventually accepted by the Smithsonian Institution. The courthouse underwent renovations in the 1970s, 1980s, and 1990s.