Completed in 1856 but never utilized, Dubuque's shot tower was intended to facilitate the manufacture of lead balls which were fired from muskets. Today, this tower is one of few remaining structures left standing in the United States. This individual shot tower has a complicated history, changing ownership and function many times over the years before attaining its current status as a historical building.

Dubuque's Shot Tower was completed in 1856 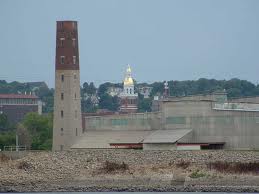 At the time of its construction, Dubuque's Shot Tower was one of many shot towers standing in the United States. Prior to new construction methods that were used in the 1860s, these towers were central to manufacturing lead bullets in the United States. While shot towers are large in comparison to their very limited and specific function, the actual process behind making the ammunition was very simple. Molten lead would be poured from a sieve placed at the top of the tower. On the way down, the lead would cool and harden into a rough sphere. Water would be placed at the bottom of the tower, to catch and cool the falling lead into the final product.

The shot tower was left unused for many years until it was eventually picked up for a purpose completely unrelated to the manufacture of ammunition. Standard Lumber Company, a lumber company that historically operated in Dubuque, purchased the building to use as a fire watch tower. Ironically, the lumberyard was destroyed and the tower was damaged in a fire that is thought to have been an arson.

The community of Dubuque values the shot tower as a historical building. In modern times, there are very few shot towers left standing, making Dubuque's shot tower a rare building of great historical value. The 1970s "Save Our Shot-Tower" fundraising campaign was successful in raising funds to renovate the tower, including renovating the top floor. Additional repairs were undertaken in 2004 as part of a larger effort by the city of Dubuque to renovate structures along the Mississippi Riverfront.