The Julien Dubuque Monument marks the location of the lead mine overseen by Julien Dubuque and operated by colonists and the Mesquakie Indians between 1788–1810. The area was known as the "Mines of Spain" because Spain controlled the territory prior to 1801. Dubuque died in March of 1810 and the Mesquakie buried him with tribal honors beneath a log mausoleum at the site of the current monument, which was built in 1897. The site is part of the Mines of Spain State Recreation Area, which was established in 1981 and declared a National Historic Landmark in 1993. The park features the E.B. Lyons Interpretive and Nature center, hiking trails, a butterfly garden, and picnic areas.

The Julien Dubuque Monument was erected in 1897 over Dubuque's grave. 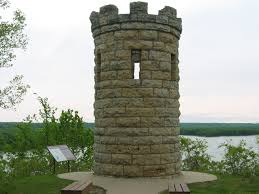 This area is important historically in the Indian-French fur trading culture and the first record of lead mining by a French trader, Nicholas Perrot, in 1690. In 1788 Julien Dubuque was granted rights by the Mesquakie Indians to mine their land for lead. Dubuque settled close to the village of Kettle Chief just south of where the Julien Dubuque Monument now stands. It was here that Dubuque founded the first Euro-American settlement in what is now Iowa.

Spanish influence was growing throughout the new land and Dubuque, concerned about the legality of his grant from the Indians, petitioned the Spanish governor seeking permanent possession of the land. In 1796 Dubuque's petition was granted and he named his 189 square mile area of land "The Mines of Spain" in honor of this Spanish governor.

Lead mining continued until 1914. The area was declared a National Historic Landmark for its concentration of archaeological sites related to mining dating from prehistoric times through the early 20th century.