The Battle of Alligator Creek Bridge took place on June 30, 1778 in what is present day Callahan, Florida. It was the only major skirmish in an attempt to conquer East Florida from the British during the American Revolutionary War.

This is the battle marker right next to the bridge. 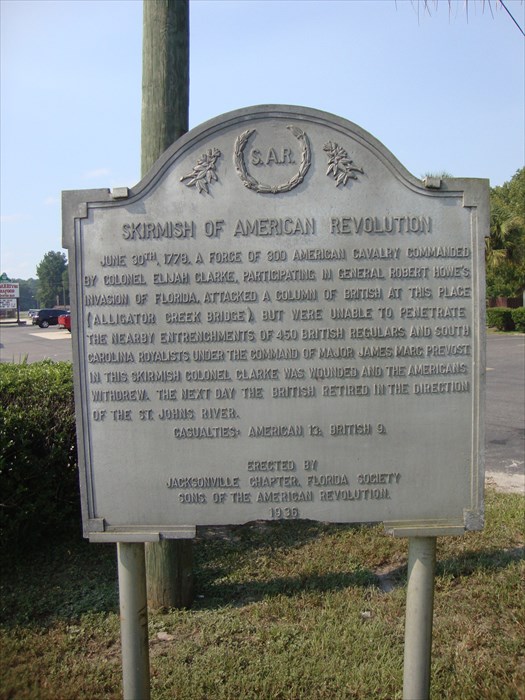 The Battle of Alligator Creek Bridge or the Skirmish at Alligator Creek occurred June 30, 1778. Before this there had been two previous attempts to try and take control over East Florida. This attack was the final attempt and proved to be very unsuccessful due to the lack of organization and logistics. Georgia Governor John Houstoun and Continental Army General Robert Howe were in charge of this battle. The two came to many disagreements and the governor did not want to share his plan with General Howe.

General Howe had command of 1,100 regular troops. He was waiting for the arrival of militia companies from Georgia and South Carolina. While waiting, General Howe learned of a British occupied fort on the St. Mary’s River. Fort Tonyn was occupied by Loyalist Thomas Brown and his men. General Howe moved across the river to wait for the militia men. Brown’s men saw General Howe’s troops crossing the river. Brown order his men to desert Fort Tonyn and set it on fire as soon as they took everything they could. General Howe and his 400 troops camped near Fort Tonyn and waited. Brown had set men up along the road that went south from Fort Tonyn towards Alligator Bridge where they had set up a makeshift fort and ditches. Colonel Elijah Clarke arrived with 300 Georgia militia men and was sent south by General Howe.

Brown had set up 100 men alongside the road that were supposed to surround the Continentals that led to Alligator Bridge but the men were ambushed by deserters and captured and killed the men. The militia men that were led by Colonel Clarke made it to Alligator Bridge, where Brown had 500 British regulars waiting. Colonel Clark thought it was a weak spot and thought he would be able to breach the British line and have the rest of General Howe’s men come through. However the ditches the British had set up were too wide for the horses and that is when the British attacked Colonel Clarke and his militia men. Colonel Clark was wounded and he had already lost nine men in action so he ordered the retreat. That was the last attempt during the American Revolution to try and conqueror East Florida.