This World War I monument is built in the style of a circular Greek temple. It measures 124 feet around and has 16 Dionic columnns, made of limestone with a rotunda in the center. Inside the rotunda is a statue called “Lady Liberty in Distress”. This statue stands 9 feet in height and is made of bronze, it stands on a base that is 5 feet in height and made of Vermont green marble. The floor of the rotunda is paved with slate and bluestone with four entrances that are closed off by decorative gates. 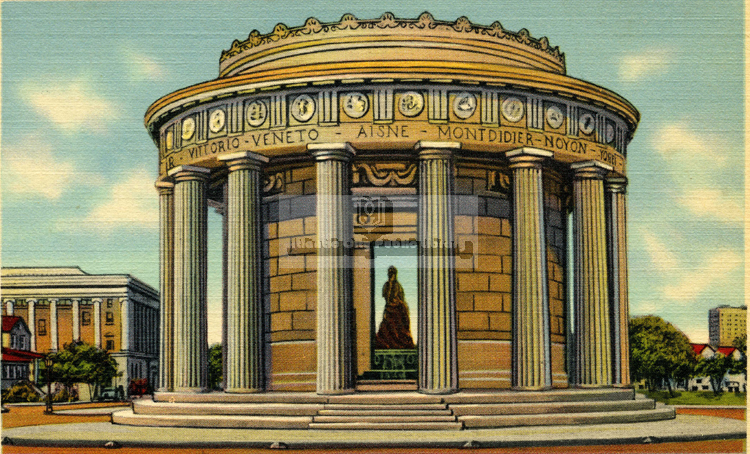 1920s. This view of Chelsea Parkway shows the World War I Memorial in the distance, as well as the Atlantic City High School, which was opened in 1923. The Soldiers and Sailors Monument is in the foreground.(H009.ChelseaPark001 Alfred M. Heston Colle 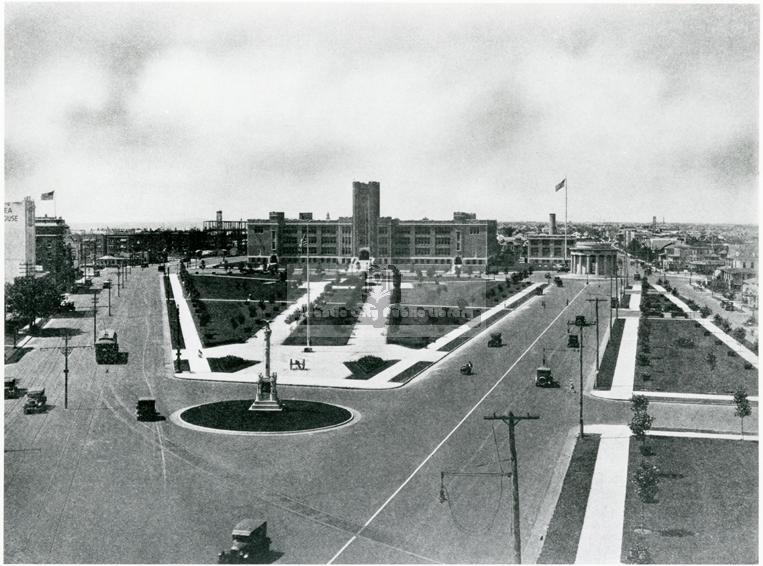 This is a view of the entire bronze statue of "Lady Liberty in Distress". 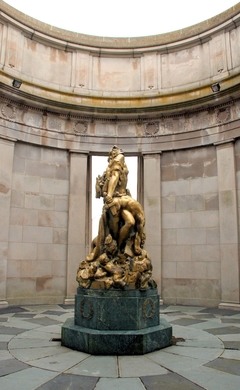 Outside of World War I Greek style monument made of Indiana limestone. 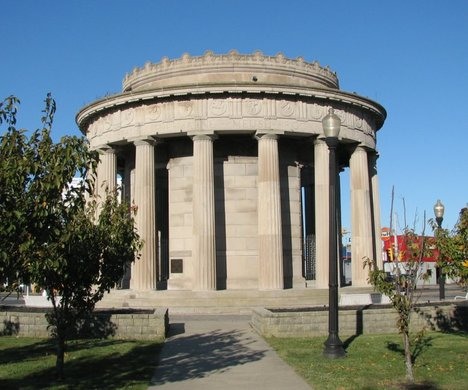 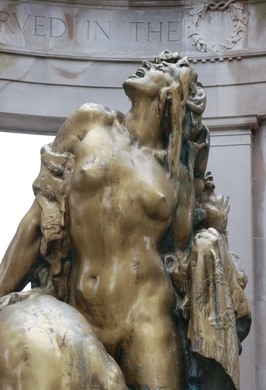 Lower view of Lady Liberty with dead men at her feet. 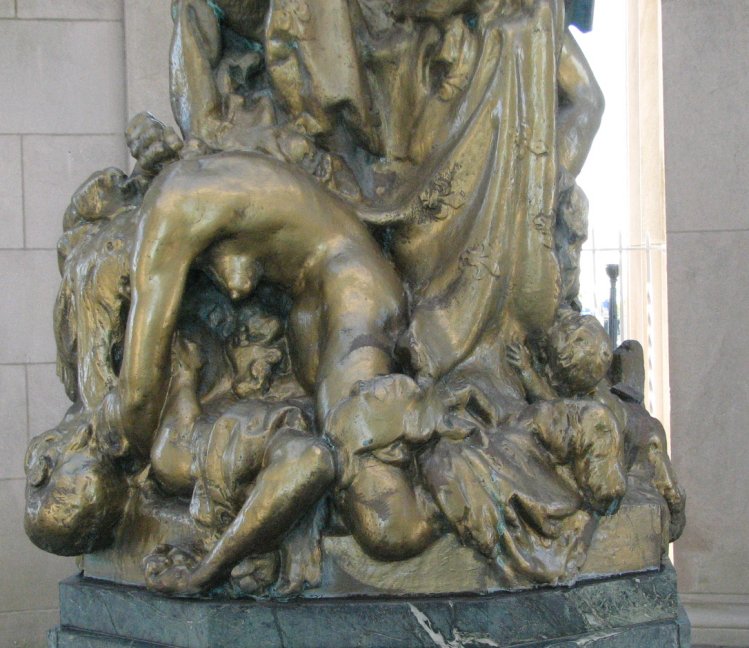 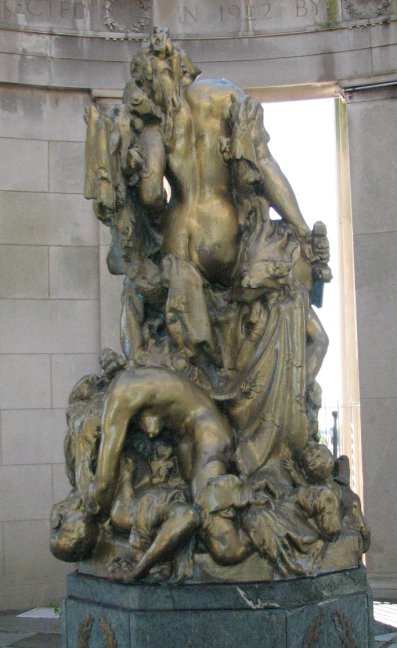 1988 bronze plaque commemorating the re-dedication of the monument and everybody involve. 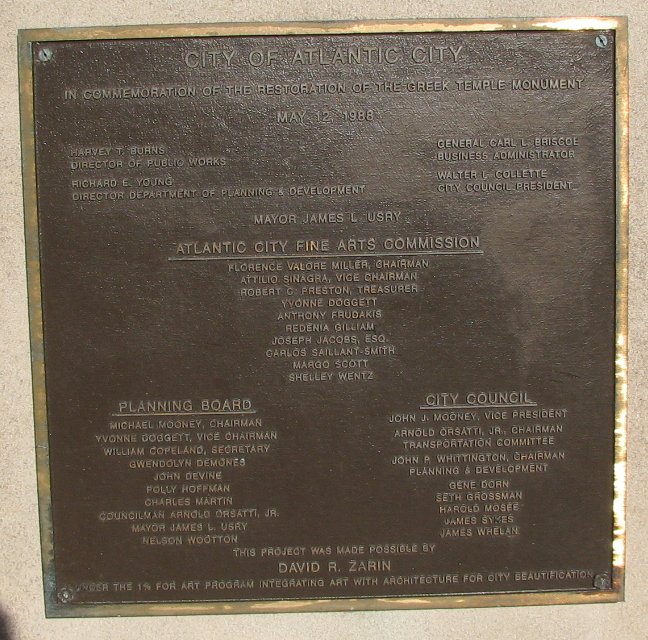 The World War I Memorial sits in O’Donnell Park to the south of Atlantic city, at the intersection of South Albany and Ventnor Avenue.  It was built to honor those that served in the military during World War I.  There is debate as to when the monument was built bit is was finally done around 1922-1923. In 1907 the New York City architecture firm Carrere and Hastings collaborated with the City of Atlantic City to erect a monument.  When World War I started it delayed the project.  They later decided that the monument would be built to honor those who served in the military during the war.

The monument sits on land that was purchased from The West Jersey and Seashore Railroad company.  Atlantic City passed an ordinance was passed by the city commission in 1992 granting $150,000 to build the monument and create a monument commission.  The upper band around the monument has the names of all the battle that their Atlantic City men were involved with; Montdider-Myon, Ypres-Lys, Cambrai, Aisne-Marne, Meuse, Vittorio-Veuetto, St. Mihiel, Lys,  Oise-Aisne, Champagne-Marne, somme, Argonne. Other inscriptions include the shields of the Army-Navy Aviation and Marines.  Inside around the upper band, it is inscribed with the words; “This Monument was Erected In 1922 by the City In Honor of Her Citizens Who Served the World War 1917-1918.”

The statue inside the monument is of Liberty “screaming in victory and sadness”.  The bodies of those that died in the war have fallen around her feet and shi is holding the body of a young man on her right leg.  In her left hand, she is holding a broken sword while a dog and rooster stand around her feet. Since the original controversy about the design, the monument has been the topic of many discussions over the years by the city.  IN 1949 the Executive Secretary of the New York Art Commission brought to light the poor condition of the monument during a visit.  Vandals had damaged it so the city's solution was to install flood lights to illuminate it at night.  In  1961 it was recommended by a city traffic engineer to move the monument to ease the traffic flow.  In 1962 they voted to move the monument but by 1963 the plan was dropped because it would have cost $60,000.  In 1988 the monument was restored and rededicated, May 12, 1988, and a bronze plaque was installed with the names of everybody involved in the project.