Union forces led by Charles Walcutt engaged Confederate forces commanded by Joseph Wheeler at this location on November 22, 1864. Walcutt took advantage of the battlefield's geography and took up defensive positions along a woodline that offered an open field in front of his men and swamps protecting their flanks. The Union benefitted from superior positions and equipment, especially when it came to the artillery that shelled the Confederate position. Confederate forces attempted to counter with several offensives but were unable to challenge the Union's superior force and retreated to the safety of the town of Griswoldville for the evening where they rested temporarily before evacuating the town and leaving it to be occupied by the Union in the middle of the night. 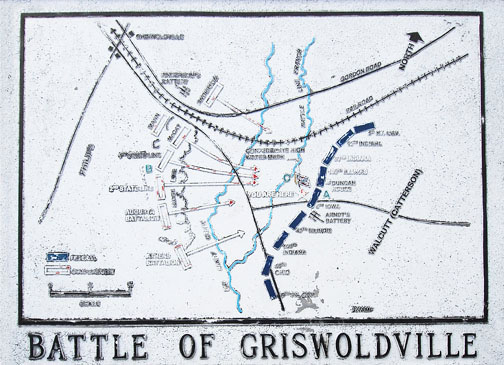 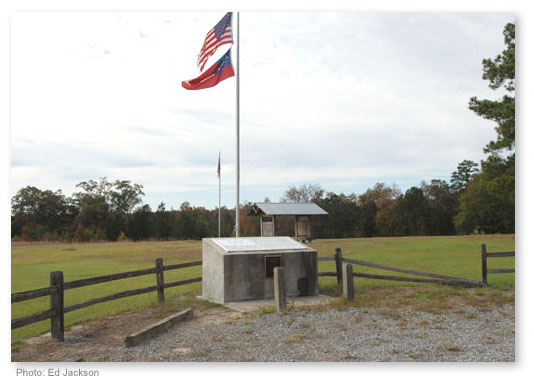 Following General William Sherman's victories in the Atlanta Campaign, his next objective was to march toward Savannah. The first sign of Confederate resistance during this stage of the Atlanta Campaign appeared in the town of Griswoldville. Even though the Union army was outnumbered three-to-one, Major General Oliver Howard had total confidence in Brigadier General Charles Walcutt to counter the Confederate resistance.

An initial skirmish carried out by Confederate forces lead to the Union army sustaining minor losses. In response, the Union charged the makeshift Confederate front-line troops, pushing them back almost a mile to the Confederacy's main force. Confederate General Joseph Wheeler attempted a counter-attack to in an attempt to slow or stop the Union's advance, but his attack failed and he was forced to pull back.
Walcutt displayed his skills as a military strategist during this battle, ordering his men to take up defensive positions alongside a treeline that laid just out of town. With an open field in front of them and swamps covering their flanks, the Union forces deployed their artillery pieces and waited for the Confederates to attack. Confederate General Pleasant Phillips, believing the rebels were bound to win due to their larger numbers, obliged by ordering his men to attack.

During their advance, Confederate soldiers were met not only by Union gunfire but artillery shelling as well. A ravine allowed the Confederate attackers to pause and regroup. After they had recovered at the relative safety of the ravine, the rebels attempted attack after attack against the Union line. All of their attacks, however, were deflected and destroyed. The Confederate forces, knowing their defeat, stayed at their ravine until night fell, then retreated.