Play this when you are by the shop!

This building is most notable for a teenage employee who worked at Clinton's Drug Store and went on to become President of the United States. In his first week of work, a fourteen-year-old Harry S. Truman earned three silver dollars which he chose to spend on a present for his mother. Prior to that time, this location was home to a wood-frame general store in the late 19th century. That original store was rebuilt as a brick structure following a fire. George Clinton bought the building and established a drug store on the main level in the mid-1890s. In February 1906, the two neighboring blocks where Clinton’s Drug Store was located was destroyed by fire. George Clinton’s brother, James, chose to buy the damaged building in May and planned to demolish the existing building and replace it. The building now stands as a rectangle, two-story, commercial building on the corner of West Maple Street and North Main Street.

Listen to the audio to learn more about Truman's thoughts on his first job! 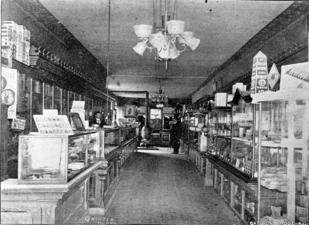 "I can remember the first $3.00 I received for working a week-seven days from seven o'clock until school time and from four o'clock until ten at night, all day Saturday and Sunday. I had to wipe off bottles, mop the floor every morning, make ice cream for sodas, and wait on the customers…. The three silver dollars looked like three million and meant a lot more. I bought a present for Mamma and tried to give the rest of it to my dad and he wouldn't take it. It was as I say a great day all around when I got the $3.00. I've never had as much or as big a payday since."

Clinton's Drug Store was located at 100 West Maple Street, in a building that was a part of the Independence town square. The original structure was built as a wood-frame housing the Noland House which served those traveling over the emigrant trails. The house was destroyed by a fire and was rebuilt with brick and was ran as a hotel between the 1880s and 1890s. However, George Clinton bought the building and opened a drug store on the first floor during the mid-1890s. Clinton also created spaces for businesses and city offices within the structure. In 1906, the entire block caught on fire, again, and was destroyed. In response, James Clinton, the brother of George Clinton, bought the badly damaged building and quickly planned to build a new building on the same lot.

President Truman worked at Clinton's Drug Store in 1898 under the direction of George Clinton. His time there helped shape how Harry S. Truman viewed the importance of hard work. His dedication to hard work would continue to shape him throughout his young adult years and his time in the military. Ultimately, his hard-work ethic played a role in his elections and later years.