This historical marker is located on the grounds of Adrian College. During the Civil War, the college was used as a training camp for the fourth infantry and became known later as Camp Williams. This training center hosted one thousand twenty-five soldiers before their deployment. In 1864, Camp Williams proved instrumental once again in training the reorganized fourth regiment. This marker is a part of the Michigan Historical Marker Commission, which makes this marker one of the six hundred and seventeen registered markers in the state of Michigan. Paired with the marker for Adrian Campus, which is located a short walking distance away. 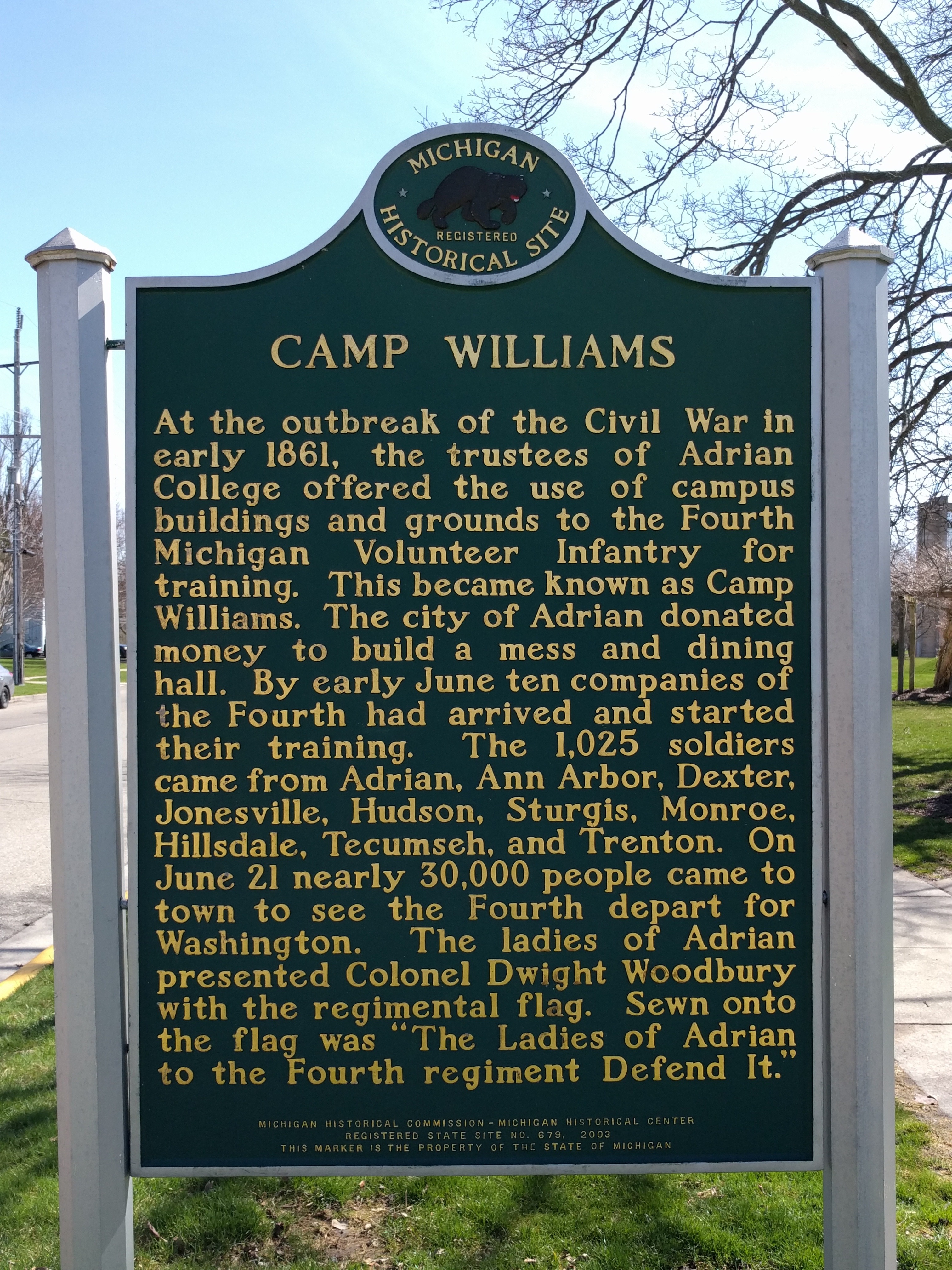 June 1861, Troops marching down East Maumee Street on their way to the battlefront. 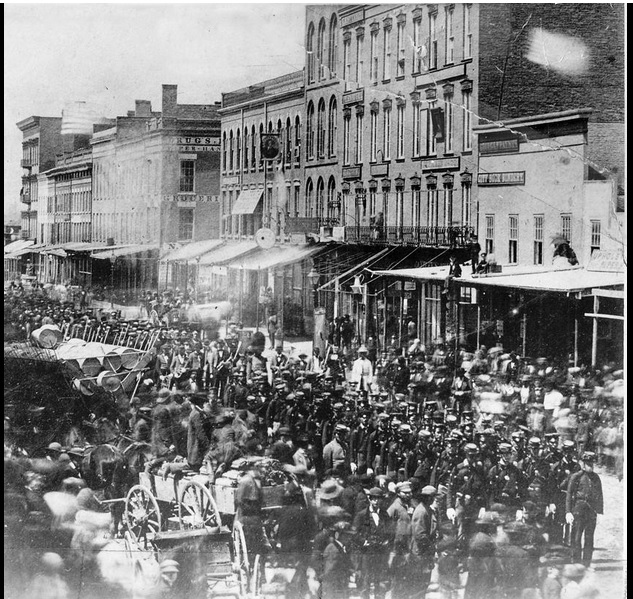 Capt. Samuel DeGolyer. Captured by the rebels and later died of wounds received during his time in their possession. 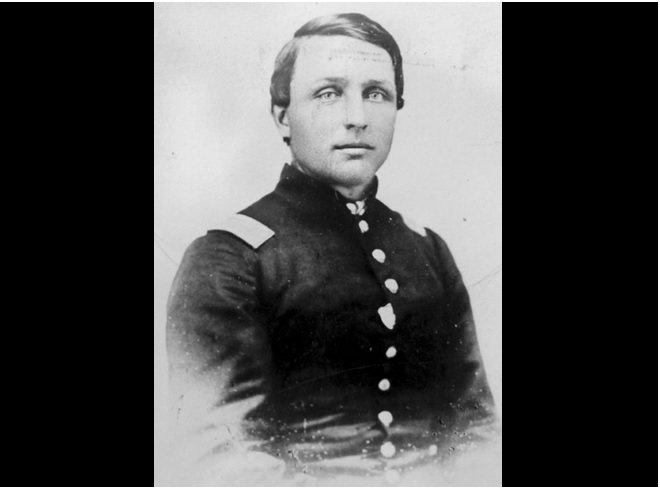 Street View of the Marker with the Campus in the background. 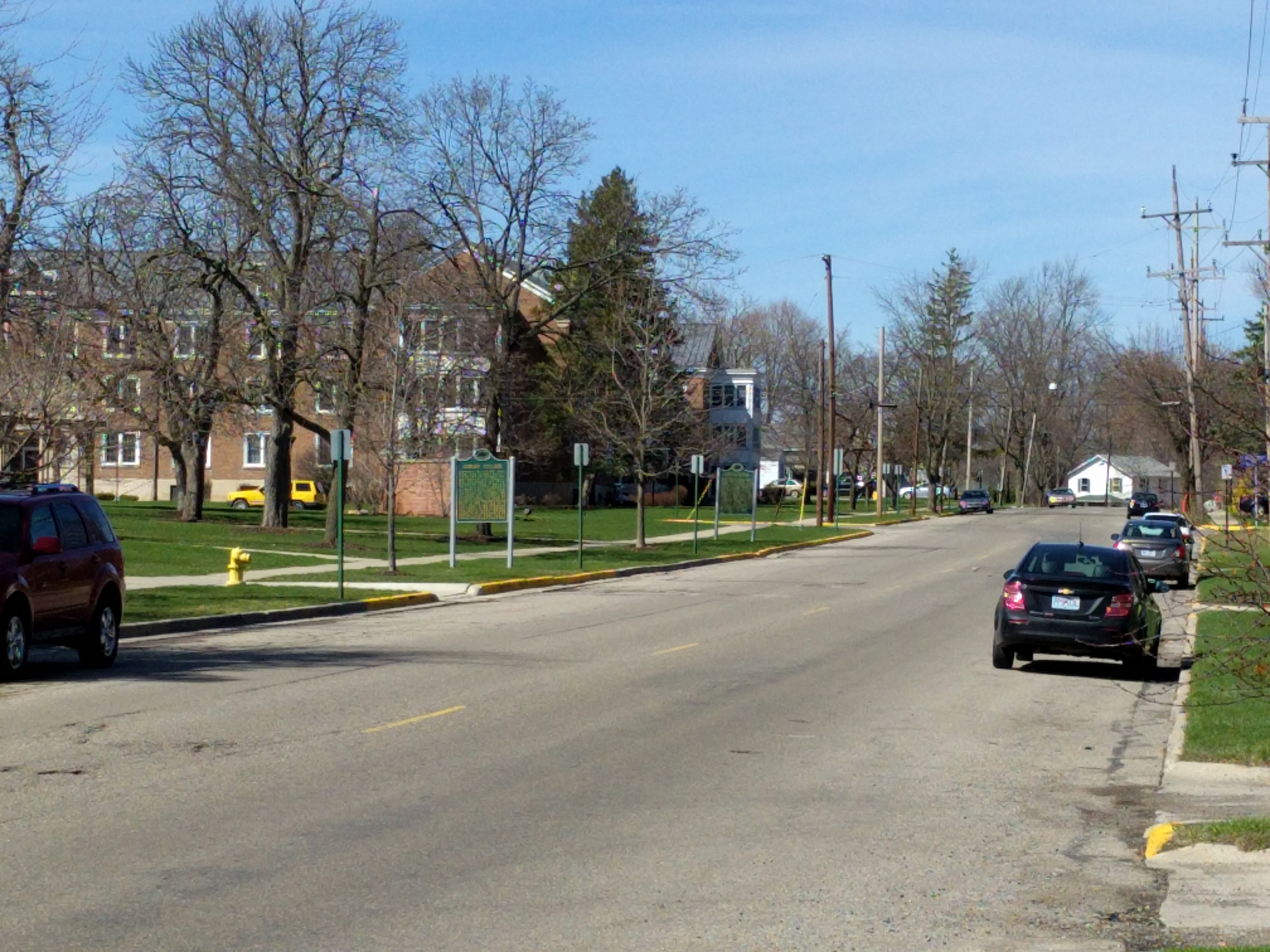 The Fourth Michigan Infantry Regiment was organized by Colonel Dwight A. Woodbury. After Adrian College had become the training center for the Fourth Infantry, Woodbury had decided to name the camp after Brig. General Alpheus Williams from Detroit. Among the soldiers that had fought in the Fourth Michigan Infantry was Captain Samuel DeGolyer, who was captured by Rebel forces but later escaped. DeGolyer took part in several skirmishes before he was fatally shot by a Confederate sharpshooter. DeGolyer's dying wish was to be able to go and see his hometown just one more time before falling to his wounds on Aug. 7, 1863.

Adrian College was founded in 1859 and the trustees allowed the grounds and buildings to be used to train the Fourth Michigan Volunteer Infantry. This training center would be labeled Camp Williams, and through fundraising efforts the camp offered sufficient accommodations for the more than one thousand soldiers. In the spring of 1861, the Fourth Michigan Volunteer Infantry was assigned to the Army of the Potomac. The regiment participated in forty-one engagements over the next four years.

Of the one thousand four hundred men that served in the unit, three hundred and seven died. Three colonels who led the unit died during the war. Colonel George Lumbard died at The Wilderness in Virginia while Colonel Harrison Jeffords died at Gettysburg and Dwight Woodburd who had died at Malvern Hill. After two years of action, the Fourth Infantry was reorganized and returned to Camp Williams for further training.

Following the end of the Civil War, Adrian College ceased to be officially Camp Williams and returned to its original purpose of higher education. With the exception of this marker, there are no physical indications of the college's role as a training camp for the Fourth Infantry.