Completed in 1925 and nestled in the center of the Michigan-Wacker Historic District in downtown Chicago, the Tribune Tower was previously home to the Chicago Tribune, Tribune Media, Tribune Publishing, and WGN Radio. Announced during the summer of 2018, the Tribune Tower was sold to a developer who will convert the building into condominiums. The structure is one of the symbols of the city and its rapid growth in the late 19th and early 20th Centuries. The building was designated as a Chicago landmark on February 1, 1989.

Tribune Tower was completed in 1925 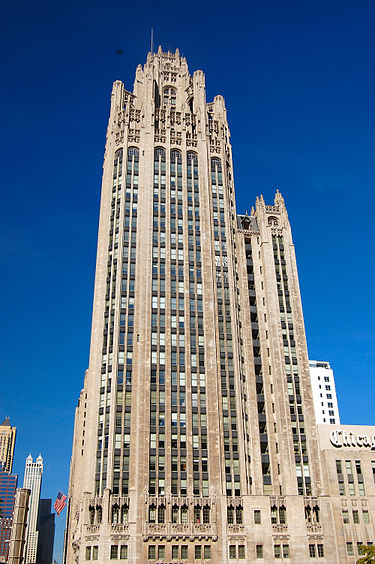 In 1922, The Chicago Tribune publisher Colonel Robert R McCormick hosted an international competition for the newspaper's new headquarters and offered $100,000 in prize money for the best design.  New York architects John Mead Howells and Raymond Hood won the contest with their gothic design.  The Tribune Tower’s architecture was highly influenced by the Button Tower of the Rouen, France cathedral and was completed the tower in 1925.

As part of the designers' way to showcase both this building and Chicago as a growing international city, the base of the tower contains stones from over a hundred historic structures from throughout the world. This includes stones found near the Pyramids in Egype, stones from historic structures in Greece, a stone from the Taj Mahal and Great Wall of China, and many others from Europe, Asia, and the Americas.