This memorial to the veterans of World War II became the first of its kind built by a state garden club when it first opened in 1946. Construction of the garden began even as the war was being waged in Europe and the Pacific. The memorial garden grew throughout the immediate post-war years as construction costs for labor and material decreased after the war. The garden was restored following a destructive ice storm in 2000 and was listed in the National Register of Historic Places on April 2, 2012.

This memorial garden became the first of its kind to honor World War II veterans when it opened in 1946 thanks to the efforts of the South Carolina Garden Club. 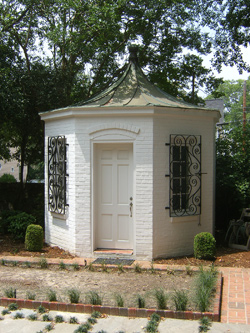 Efforts to create the South Carolina Memorial Garden began in 1944, when Mrs. Louis I. (Guignard) Guion appointed a committee to establish the memorial space. Mrs. Samuel Boyleston approached Guion with an offer for a segment of her family’s garden. The Garden Club of South Carolina requested and received funding the from the South Carolina legislature but some of the early efforts to build the memorial garden were delayed by the war effort.

The March 1946 Bulletin of the South Carolina Garden Club reported that much of the work to prepare the grounds was complete. A notation that a scale drawing of the garden was made by Miss Erin Kohn to be presented at the next meeting with the architect’s plans, however, the architect is not named and is not clear if these are plans for the structures built in the garden or Brigg’s plan for the garden. The hiring includes Mr. A.F. Edwards who is a “real garden expert” for a year to act as maintenance supervisor and assists in “procuring the labor provided by the state” for the Memorial Garden.

After the establishment of the garden, other gifts were presented to the Garden Club of South Carolina for the Memorial Garden.  Some of these were the Guignard Brick Works for over $2,000 of bricks, “desirable shrubbery” with a note of approval of Briggs, two boxwoods, one white camellia, one pink herme camellia (to be placed near the house).  Of note a “fine camellia” and a Feijoa are mentioned from parties interested in donating but no note if they were.

Loutrel W.Briggs, who maintained dual residence in Charleston, South Carolina and Doylestown, Pennsylvania, contributed his services as a “landscape engineer” for the Memorial Garden.  His design included the garden layout and the gates.  The layout included a “gate house, the fountain, the statuary, the tool house, the flag-stone walks, the named plants.”   The first mention of Loutrel Briggs role in the Memorial Garden is in the Financial Report on the Memorial Garden in the 1944-1946 Yearbook as “When Mr. Briggs’ plan is complete.”   The only known surviving plan of the garden is at the South Carolina Historical Society, however, it is noted that every South Carolina Garden Club city could obtain a copy of Brigg’s plan.
Before the planning of the garden could happen clearing of the donation was done.  Among the removed plants are “seedling altheas, etc., as well as about 20 ragged cedars,” and “an old chaste tree (Vitex) on the lawn.”  Other plants were rearranged such as moving box[wood] to “increase the symmetry of the fine curved borders and to widen the open at the east end,” and “eight large Burfordii hollies” were transplanted from the east west end to screen the wall, and azaleas were transplanted to cover the water lines.
Existing in the Boylston donation was “a rectangular perfect grass carpet bordered with very handsome, exceedingly valuable old English Boxwood; also Azaleas, rare Magnolia Stellatas, English Laurel, Tea Olives, large Camellias, and other choice plants. Outstanding is the rare boxwood.”

Among the list of additions to the garden were “[t]hree loquat, two photinia, two tea olives, two Sasanqua Camellias, a cleyera, two large and many small cherry laurels.”   Descriptions of the garden describe “aged box and other evergreens” with “an impressive oval of English boxwood,” and flowering shrubs.   Listed in 1948 is the boxwood and a “huge Alba Plena Camellia (18’ x 18’).  The gatehouse was prohibitively expensive when the garden was under construction.  For a temporary shelter, the Garden Club of South Carolina approached the City of Columbia for use of a “frame salvage shelter” which was granted.  This was repainted and fitted with doors and windows.  By 1948, there were still issues of cost for construction; however, it is planned to be built of birch.   It served for a year as a donation.

The tool house is described as a “small birch tool house” being built by 1948.
By 1947, the Garden Club reports that the Briggs’ wrought iron gates are installed and the planned bronze marker is on order.   It is also reported that the gates were installed in the spring of 1948 as a donation by the East Piedmont Region Garden Club.   Briggs’ low brick walls and steps were completed as well as a small tool house.  The flagstone entrance terrace is completed.  Garden furniture listed as installed are several iron benches.  The fountain has not yet been installed, however, the plumbing work has been completed.
The South Carolina Garden Club was awarded the White Ribbon Award of Exceptional Merit on 9 April 1946 for the Memorial Garden at the National Convention of State Garden Clubs in New Orleans.