There are many monuments that have been built as a tribute to soldiers who have died while in military service, but there are few dedicated to the families who continue to grieve for their deceased loved ones. The Gold Star Families Memorial monument, located in Barboursville Park in Barboursville, WV, was built to honor Gold Star families whose relatives were lost while serving in the armed forces. This black granite monument has a section cut out of the stone in the shape of a soldier standing at salute, as well as four panels on either side that tell a story of the Gold Star Families and their fallen loved ones. Hershel "Woody" Williams, a retired U.S marine, created the Medal of Honor Foundation which is the driving force behind the construction of the memorials across the country.

Gold Star Families Memorial Monument "A tribute to Gold Star mothers, fathers, and relatives who sacrificed a loved one for our freedom" 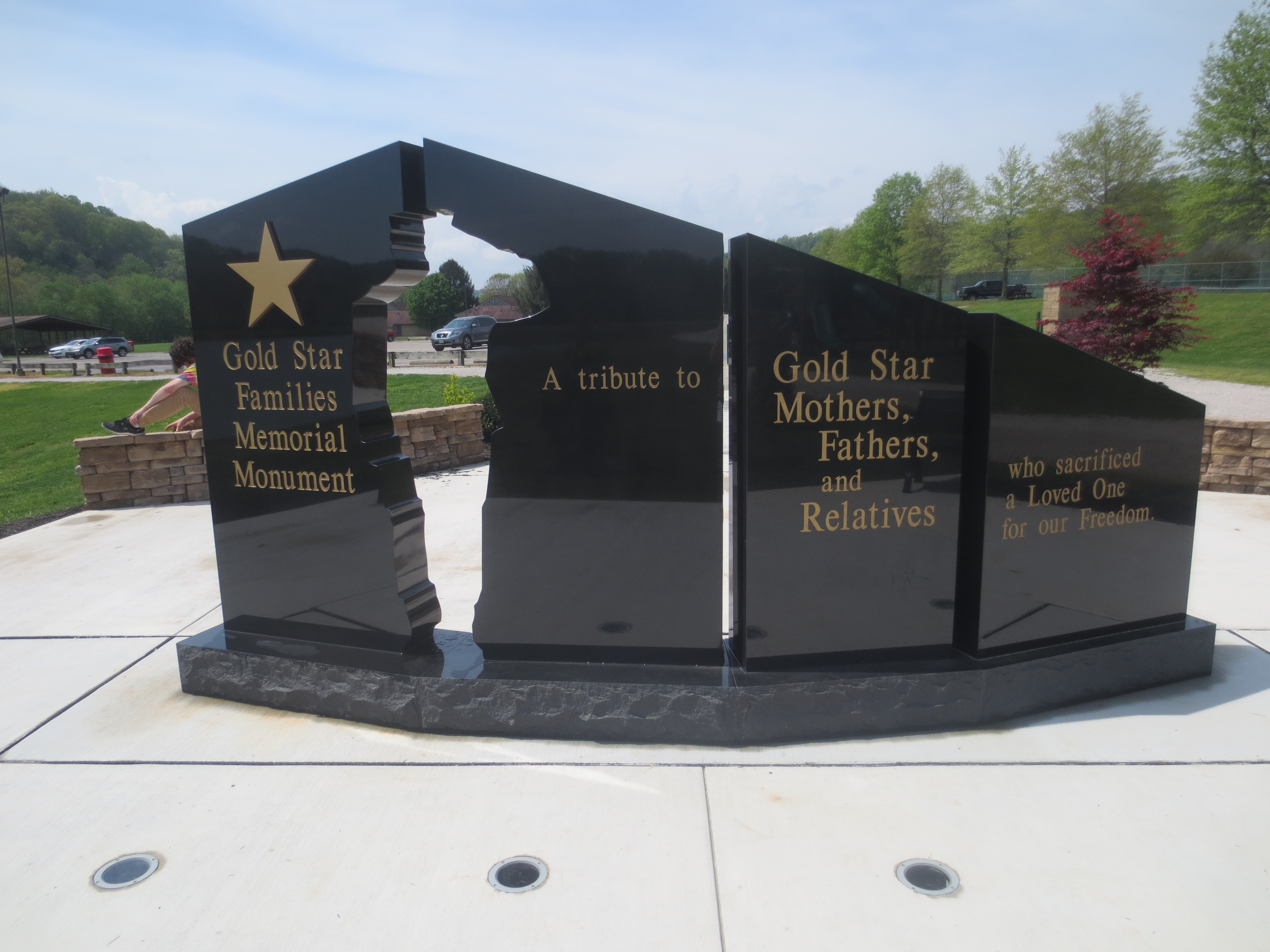 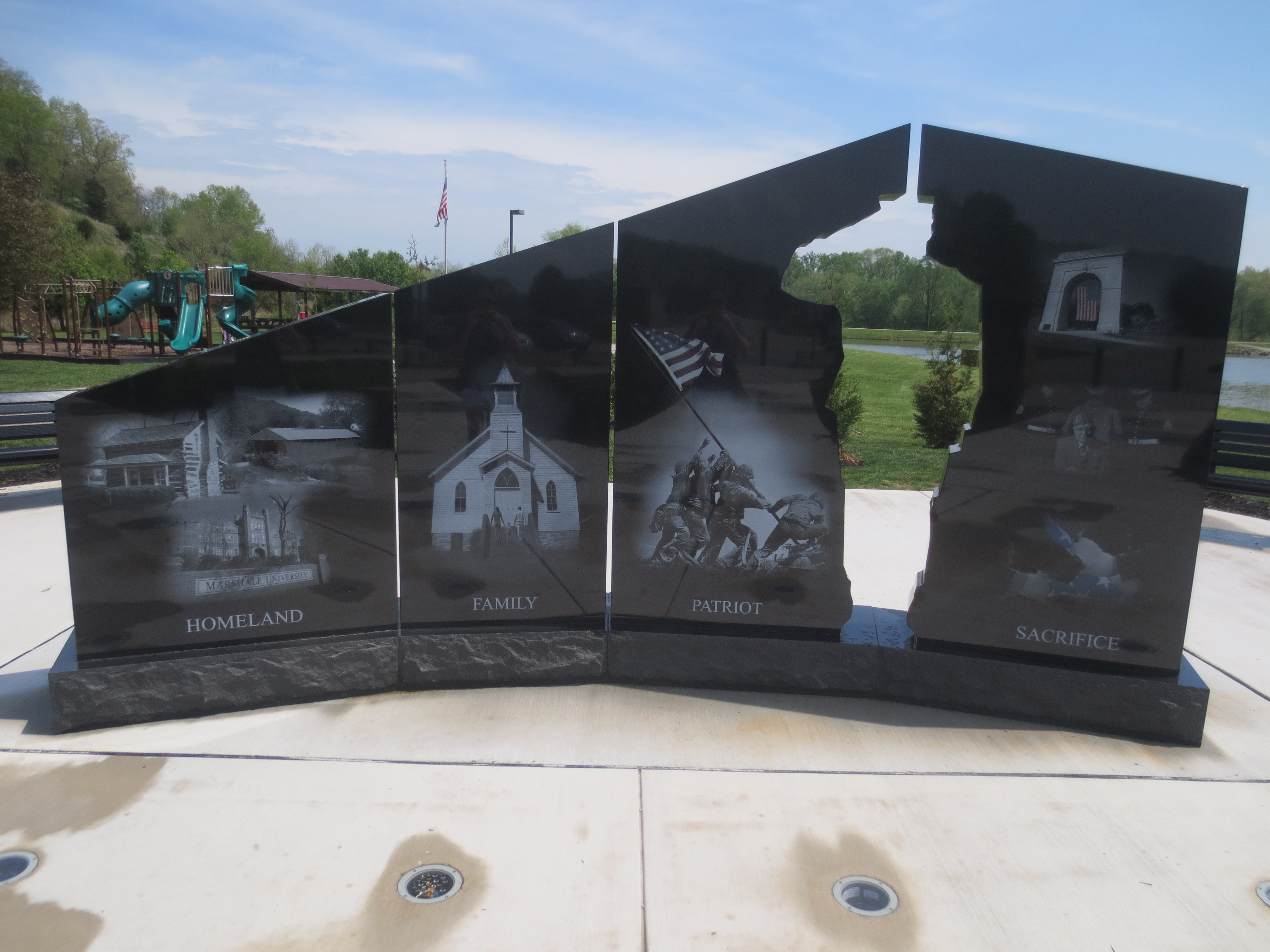 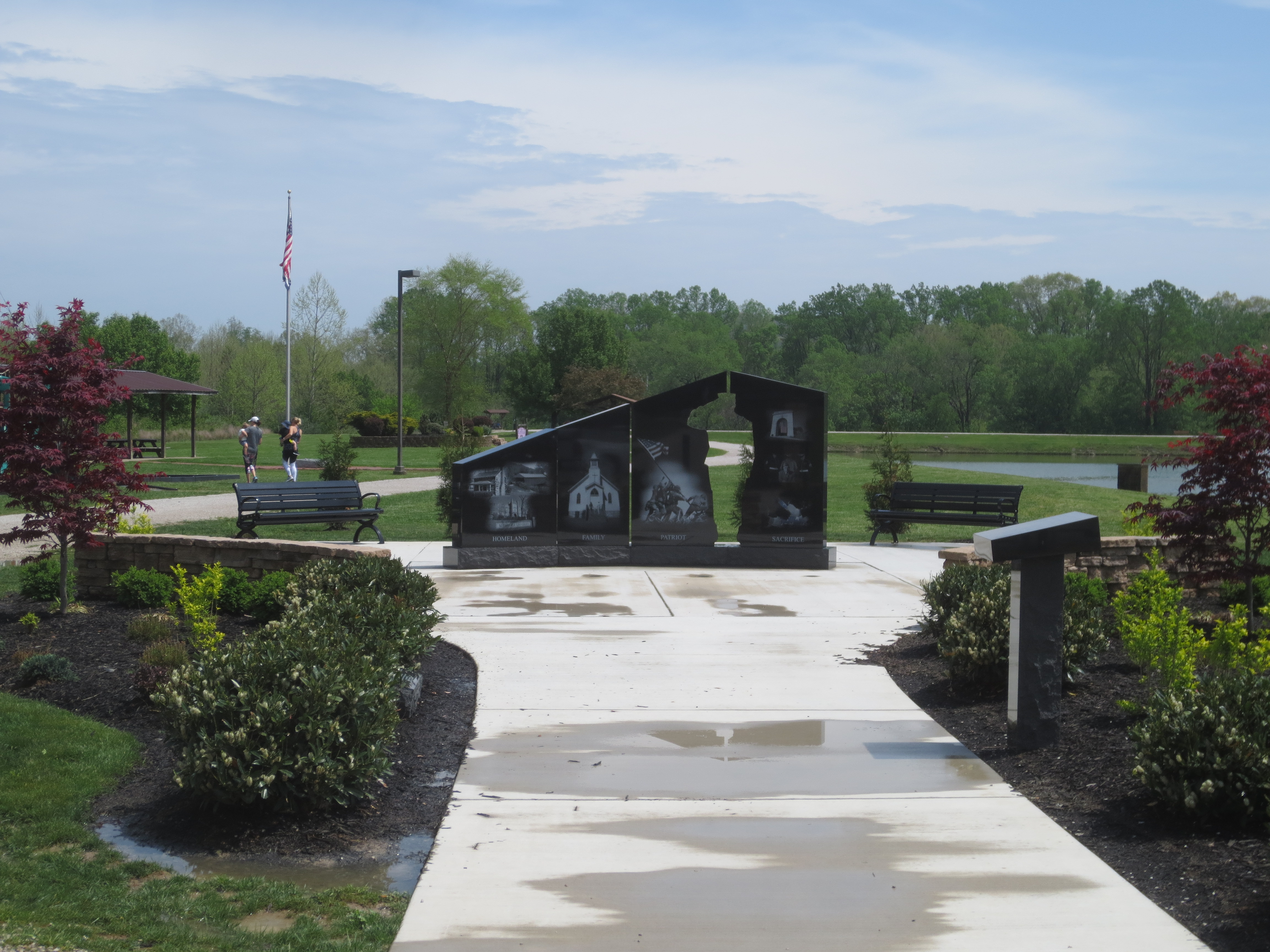 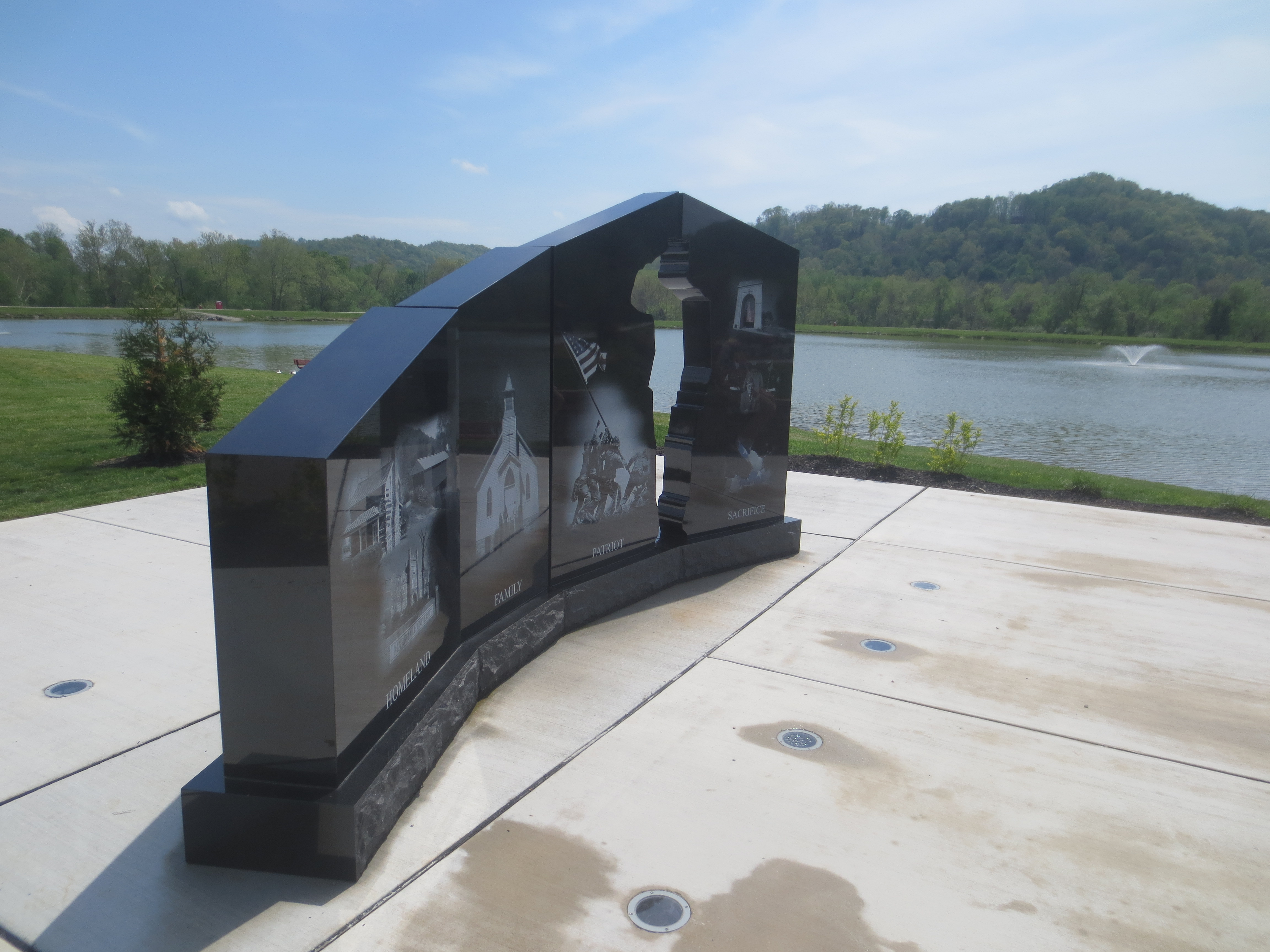 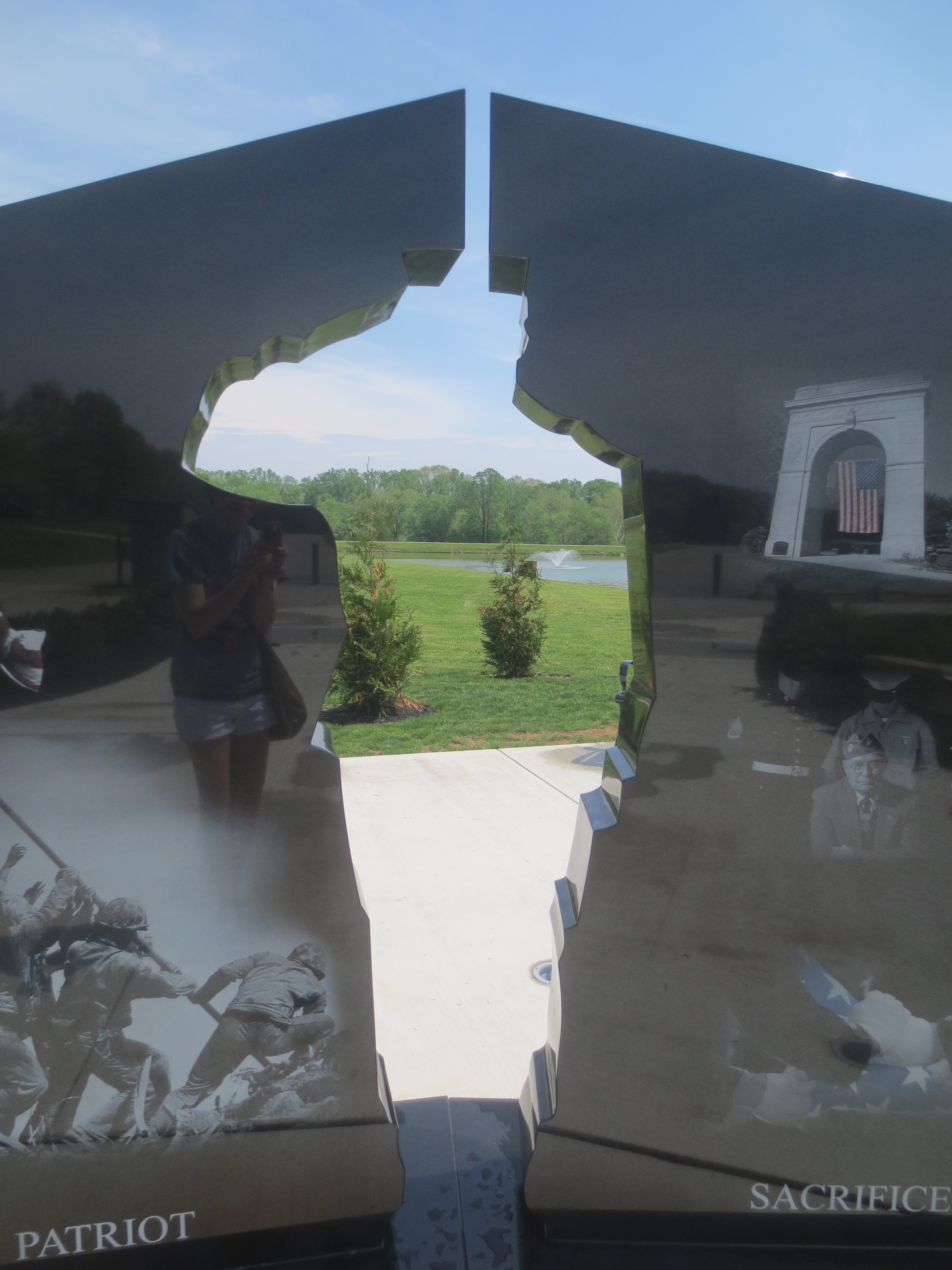 Hershel "Woody" Williams was born outside of Fairmont, West Virginia in 1923. As a young man, Woody delivered death notices to families who had lost a relative in the line of duty. Woody went on to fight in the Battle of Iwo Jima during World War II in 1945. Woody received the Medal of Honor for his valor in battle at the age of 21. In 2012, Woody created the Hershel "Woody" Williams Medal of Honor Foundation. The goal of this foundation is to erect monuments across the country dedicated to families whose loved ones perished while serving in the U.S armed forces. There are currently 17 Gold Star Family monuments across the U.S, with more communities being encouraged to raise money to erect more of these important monuments.  Gold Star Families monument sites are places where people who have lost relatives can go to to remember their loved ones and recognize the patriotism and sacrifices they made for their family and country.
Gold Star Families monuments are made out of black granite with a section of the stone cut out in the shape of a soldier saluting. The standard lettering on one side of Gold Star Families monuments reads: "A tribute to mothers and fathers who sacrificed a loved one for our freedom." The other side of the monument reads: "Homeland, Family, Patriot, Sacrifice." Above the four words are four panels that picture scenes that vary according to the location in which they are built. The Gold Star Families monument located in the city of Barboursville's park was completed on October 14, 2016 and is the third monument of its kind to be erected in West Virginia. The panel labeled "Homeland" on Barboursville's Gold Star Families monument features pictures of Marshall Univeristy, a covered bridge, and a log cabin. The two middle panels labeled "Family" and "Patriot" feature a church and a scene of soldiers raising an American flag on a battlefield. The far-right panel labeled "sacrifice" features the memorial arch located in Ritter Park in Huntington, West Virginia, along with a picture of Hershel "Woody" Williams and two men shaking hands.