Children as young as elementary school students were arrested for nonviolent demonstrations against segregation. Here, children are arrested near Birmingham City Hall, May 4, 1963. 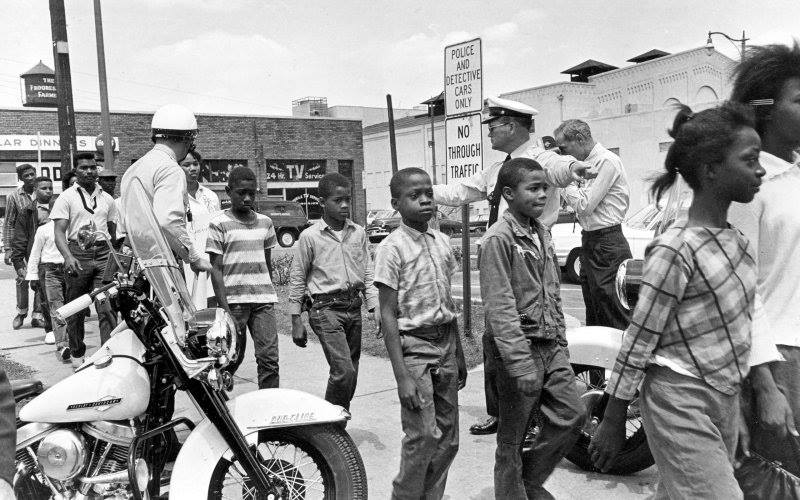 In this iconic image of the movement, a 17-year-old civil rights demonstrator is attacked by a police dog on May 3, 1963 at 16th St and 6th Ave North. Images of the the violence drew worldwide attention. 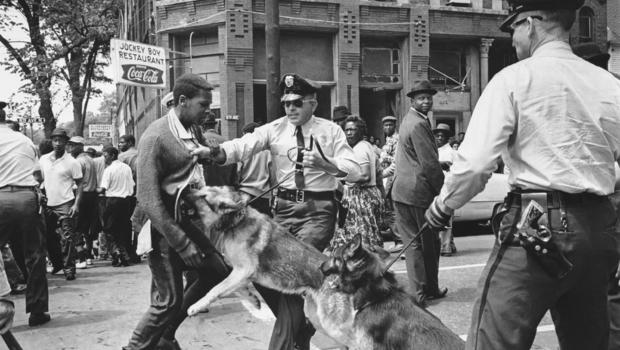 In the spring of 1963, civil rights activists prepared their most ambitious protest in Birmingham, Alabama, which Martin Luther King, Jr. called “probably the most thoroughly segregated city in the United States.”1 Civil rights groups, including the Alabama Christian Movement for Human Rights (ACMHR) and Southern Christian Leadership Conference (SCLC), initiated the Birmingham Campaign in April 1963. The Birmingham Campaign targeted the city’s discriminatory laws, which permeated employment and business practices, schools, public transit, voting, and various public facilities. To put pressure on the city, civil rights groups and the volunteers they recruited boycotted segregated businesses during the busy Easter season and participated in nonviolent direct action tactics, such as marches, sit-ins, and pickets. Demonstrations appeared throughout the city in churches, libraries, public buildings, and the streets, resulting in the arrests of hundreds of protestors, including Martin Luther King, Jr. on April 12, 1963. Days after his arrest, King penned the widely-published “Letter from a Birmingham Jail,” in which he defended the use of civil disobedience to protest unjust laws. According to King and many of his supporters, breaking segregation laws shone a spotlight on their injustice and forced communities to negotiate. “It is unfortunate that demonstrations are taking place in Birmingham,” King wrote, “but it is even more unfortunate that the city's white power structure left the Negro community with no alternative.”2

As the Birmingham Campaign continued throughout April, the SCLC and ACMHR looked for ways to keep the momentum going, though arrests and violence against protestors discouraged interested volunteers. These volunteers, mostly adults, risked arrest, job loss, and eviction from their homes for protesting. SCLC staff member, James Bevel, recognized that young adults and children might be able to continue the protests. Bevel, an early member of the Student Nonviolent Coordinating Committee (SNCC) and leader the Freedom Rides, was aware of young people’s power and their passion for civil rights issues. Furthermore, Bevel rationalized that young people had less to lose than their employed adult counterparts. Though King and other civil rights leaders initially had reservations, they later supported recruiting children and young adults because, in King’s words, “...they are not only doing a job for themselves, but for all America and for all of mankind.”3 SCLC and ACMHR canvassed local colleges and high schools and began training the demonstrators in nonviolent direct action tactics.

On May 2, more than a thousand young African Americans skipped classes and gathered at the Sixteenth Street Baptist Church. From there, they dispersed throughout the city in small groups, singing songs and marching with intent. Some marched to city hall, with the goal of speaking with the mayor of Birmingham about segregation. One of these demonstrators, 12-year-old Freeman Hrabowski, later recalled, “The police looked mean, it was frightening. We were told to keep singing these songs and so I’m singing, I ain’t gonna let nobody turn me round, keep on a walking, keep on a talking, marching on to freedom land. And amazingly the other kids were singing and the singing elevates when you can imagine hundreds of children singing and you feel a sense of community, a sense of purpose.”4 Though they demonstrated peacefully, they were not met with a peaceful response. On the first day of the protest, police arrested hundreds of young people for protesting without a permit and took them to jail in school buses and police vans.

The next day, May 3, hundreds of young African Americans again turned up to continue the demonstration. The Birmingham Commissioner of Public Safety, Bull O’Connor, ordered police to spray the children with powerful firehoses, hit them with batons, and threaten them with police dogs. King, released from jail in late April, spoke to families on the evening of May 3 at the Sixteenth Street Baptist Church, assuring them that the children would be all right and that their cause was just.

Violent images from the Children’s March appeared on televisions and newspapers around the world, sparking outrage and demands for change. The Department of Justice intervened on May 10 and helped the SCLC and Birmingham officials negotiate desegregation of downtown stores. This step toward equality was stifled when the Birmingham Board of Education announced that student demonstrators would be suspended or expelled. The SCLC and NAACP fought for the students’ rights in court. At the end of May, the Fifth Circuit Court of Appeals ruled against the Board’s decision. Birmingham schools integrated in September.

The Children’s March brought the Birmingham Campaign to an end and helped begin a new era of integration. White segregationists, however, responded to Birmingham's integration with violent acts, such as planting bombs at a hotel and home associated with civil rights activists, including King’s brother, Alfred Daniel King. In September, the Ku Klux Klan bombed the Sixteenth Street Baptist Church, where the Children’s March had begun months earlier, and four young girls died. While discrimination and racism remained palpable, the Birmingham Campaign and Children’s March provided momentum for civil rights activism throughout the year, which culminated in the March on Washington in August and Civil Rights Act of 1964. Their actions remain a touchstone of student and youth activism to this day.

4.     Freeman Hrabowski, qtd. in Birmingham and the Children’s March,” PBS.