Yorktown, Virginia is rich in U.S. Colonial history. Yorktown was originally established as a trade hub for imports and exports for Great Britain. Yorktown was also home of the last battle of the Revolutionary War. Lord Cornwallis was surrounded and eventually surrendered his army to General Washington. Yorktown was nearly destroyed in the Civil War siege by Union battleships and the troops that invaded thereafter. Currently Yorktown is a designated national park. The battlefield at Yorktown is a popular tourist attraction where people can view reenactments and many historical sites. For more information, click on the link below. 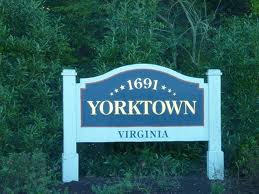