An aerial shot of the plant 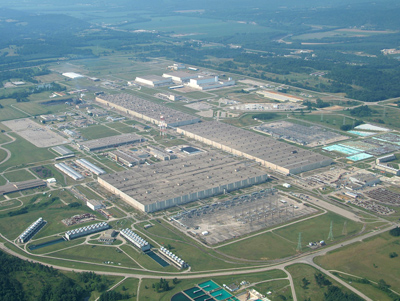 The 3,700-acre federal facility was the last of three gaseous diffusion plants built in the United States by the Atomic Energy Commission (AEC), the predecessor agency of the U.S. Department of Energy (DOE). The Portsmouth facility, along with its sister facilities at Oak Ridge, Tennessee, and Paducah, Kentucky, enriched weapons-grade uranium that was used for the nation's nuclear defense program during the height of the Cold War. Later, fuel produced at the Southern Ohio facility was used by the U.S. Navy to power its nuclear subs and the commercial nuclear power industry.

The Department of Energy's Office of Environmental Management began an environmental cleanup program at the site in 1989. In 2005, the Department of Energy initiated deactivation of the Portsmouth facility. In 2010, a $2.1 billion contract was awarded to Fluor-B&W to conduct decontamination and decommissioning activities at the facility for over 10 years. The project is expected to end in 2024. The environmental cleanup program is continued today by the U.S. and Ohio Environmental Protection Agencies. Since this project is still being enacted many field trips are taken to this site. During these field trips, the kids learn details about this plant and what is being done to it.

The Portsmouth Gaseous Diffusion Plant has many different buildings and facilities on site. These include process buildings, feed, and sampling facilities, a mechanical testing building, an electrical switchyard, a steam plant, and a shipping and receiving facility. The site also has a cafeteria, administrative building, and a hospital once used for the employees of the plant.