Fort Rosecrans National Cemetery is a federal military cemetery. It is located on the grounds of the former Army coastal artillery station Fort Rosecrans and is administered by the United States Department of Veterans Affairs. The cemetery overlooks San Diego Bay and the city from one side, and the Pacific Ocean on the other. Fort Rosecrans is named after William Starke Rosecrans, a Union general in the American Civil War. The cemetery is spread out over 77.5 acres (31.4 ha) located on both sides of Catalina Blvd. 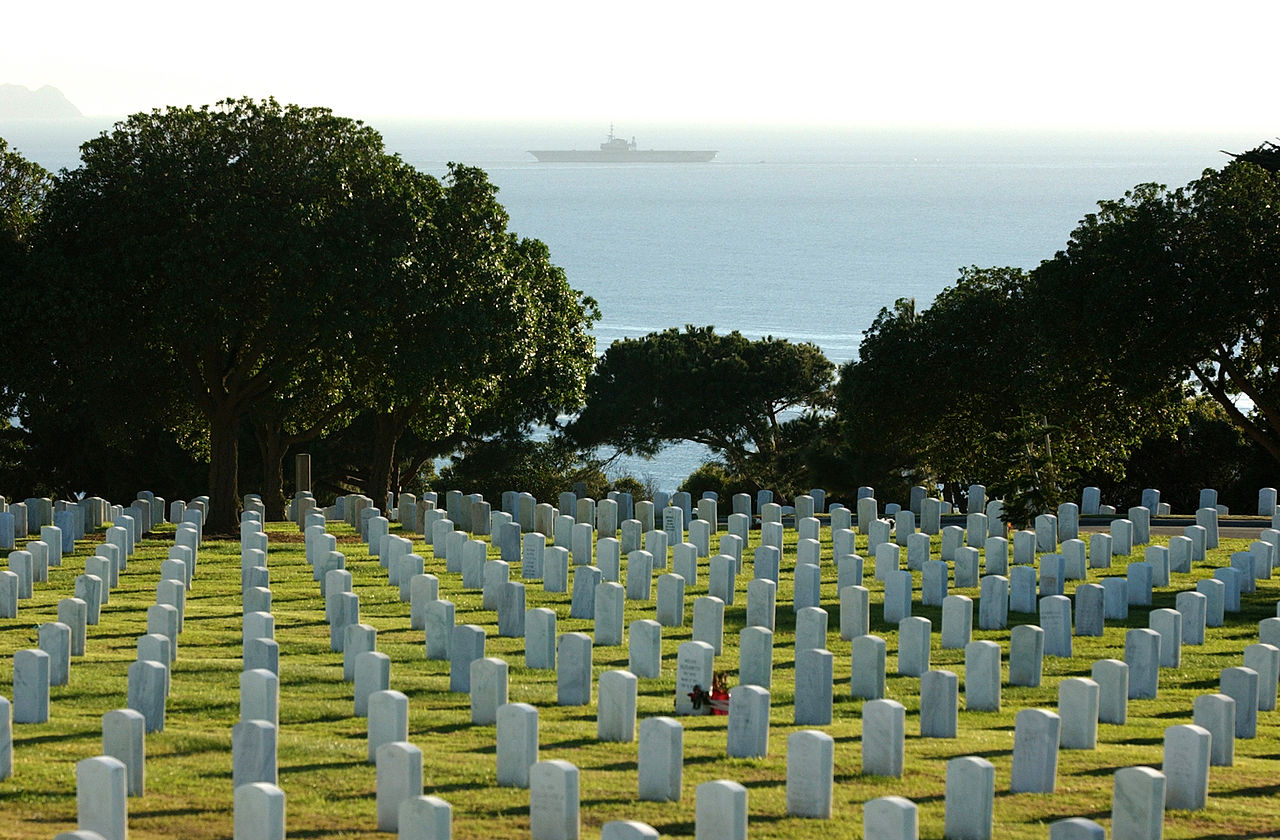 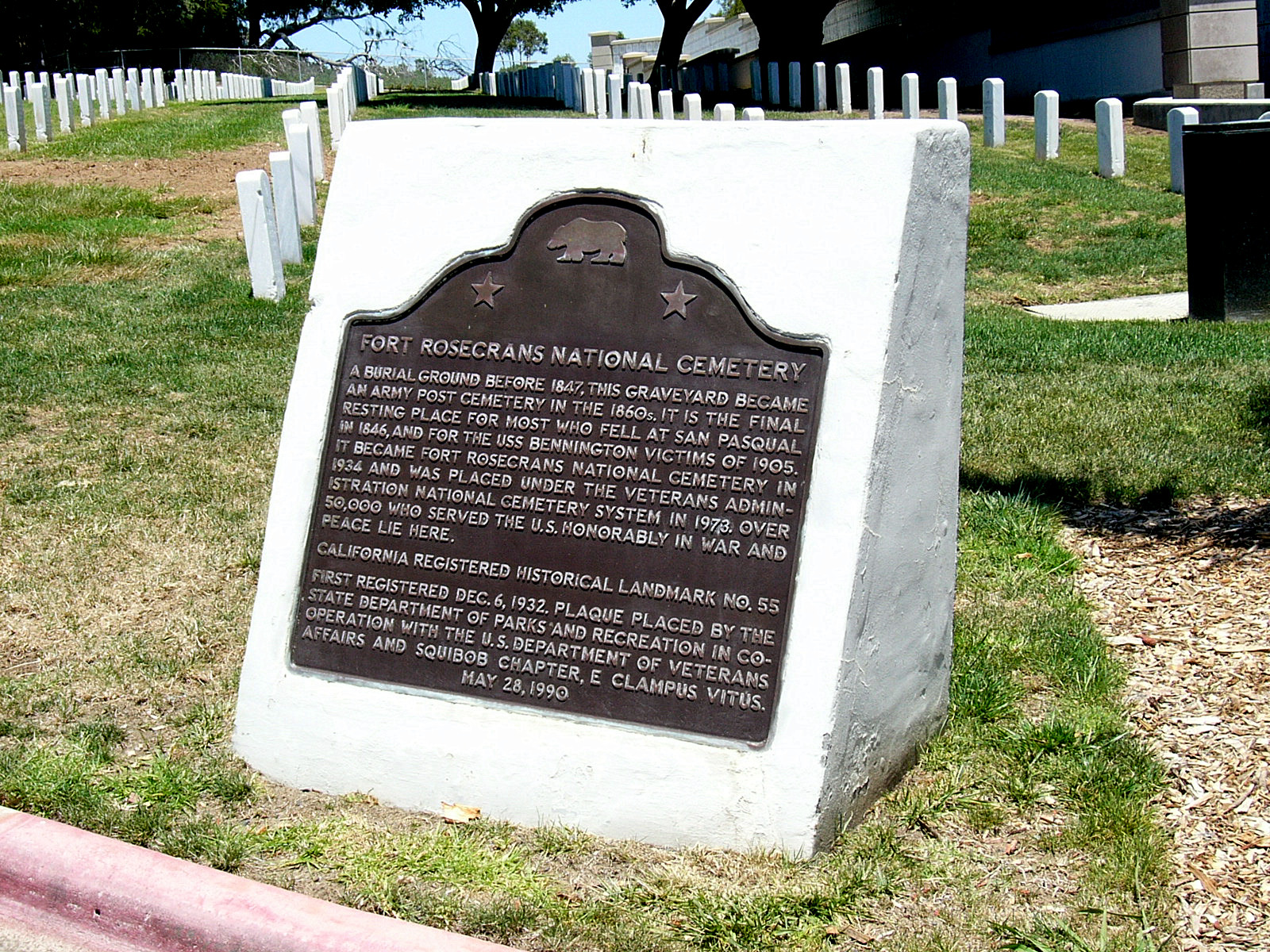 The USS Bennington monument soon after it was erected 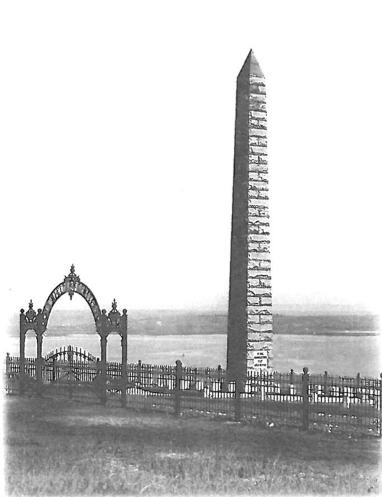 The Bennington monument as it looks today 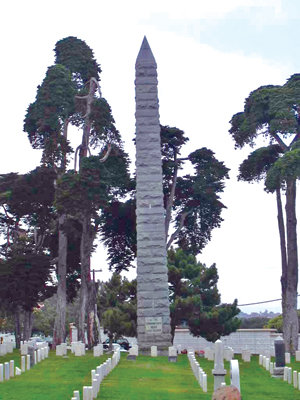 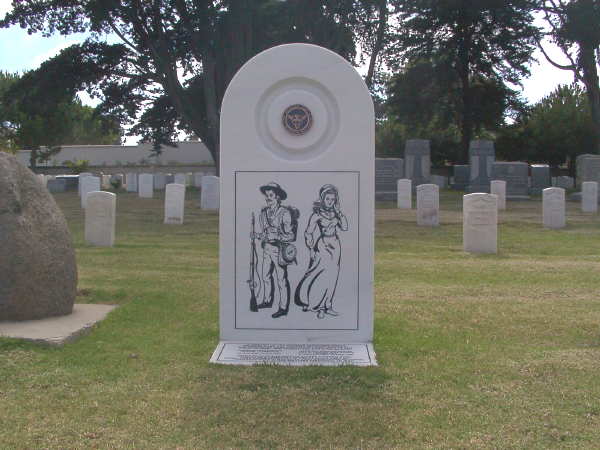 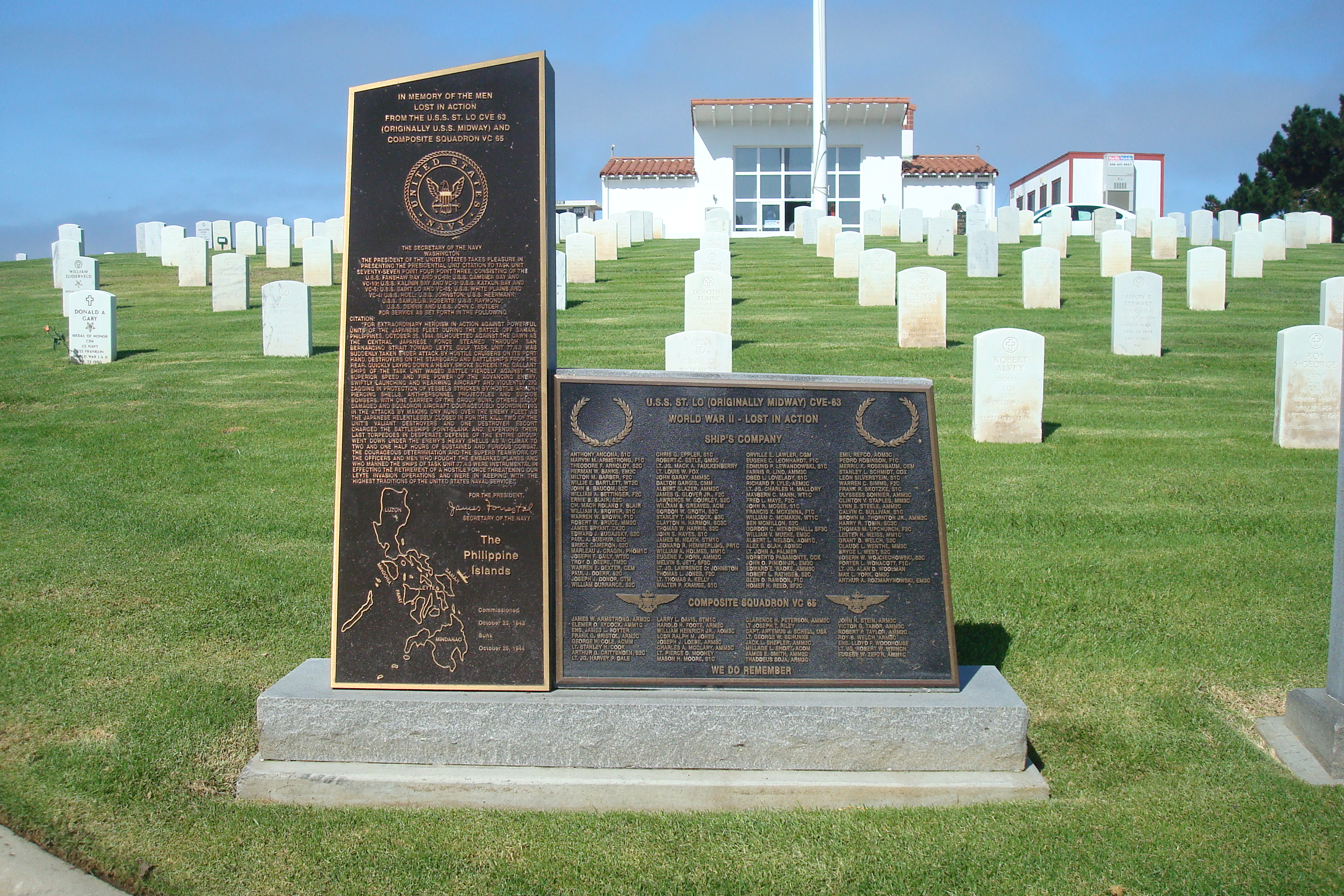 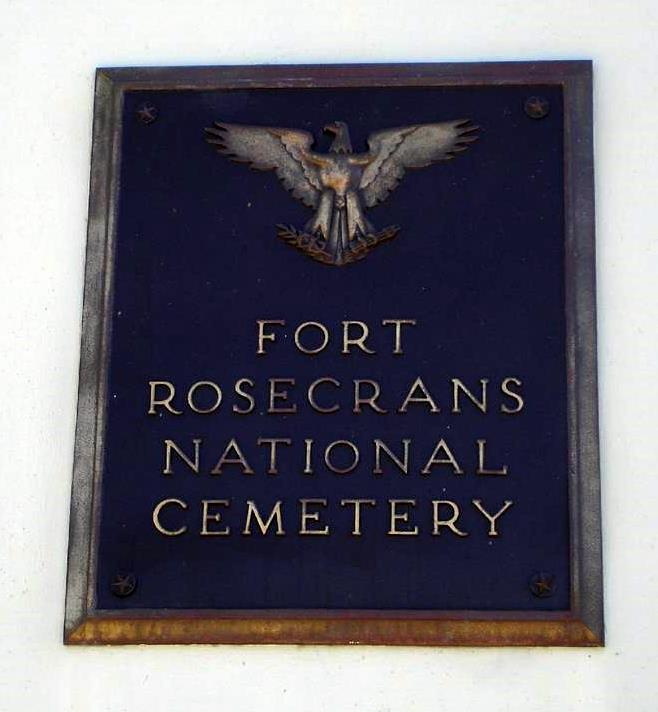 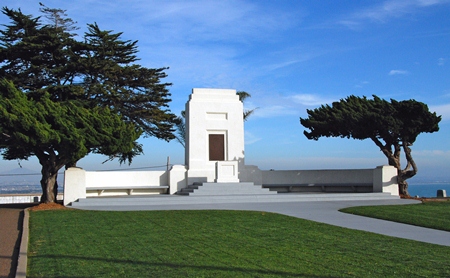 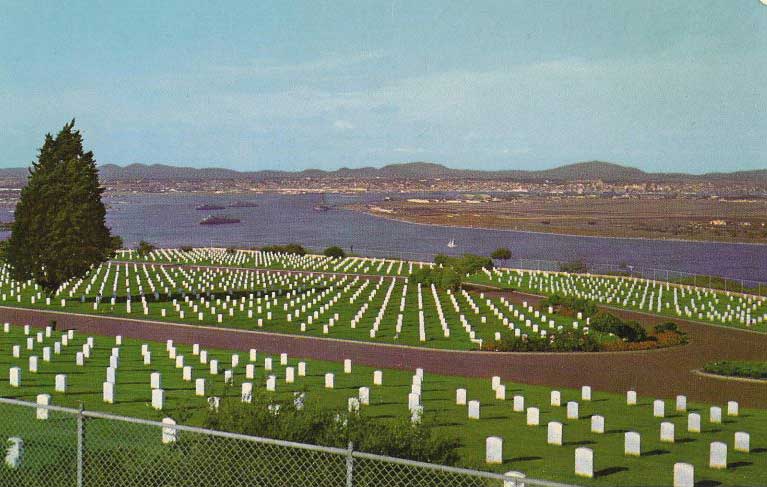 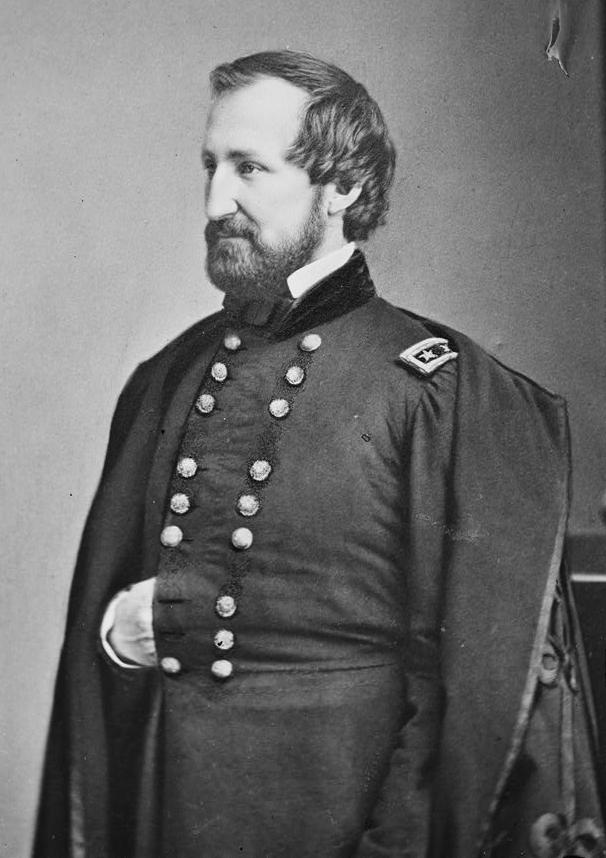 Many of Fort Rosecrans interments date to the early years of the California Republic, including the remains of the casualties of the Battle of San Pasqual. Shortly after the United States declared war on Mexico in May 1846, Brigadier Stephen W. Kearny was tasked with conquering Mexico's northern provinces, New Mexico and California. While Kearny demonstrated his considerable gift for administrative command with his acquisition of the New Mexican territory, he faced a more difficult task in California. Expecting a show of force from the Mexican Californios, Kearny set out west from New Mexico. Upon reaching California, Kit Carson intercepted him and his men, who informed him the territory had been taken by American settlers in the Bear Flag Revolt. Kearny sent 200 of his men back to New Mexico with the news and continued forward with one-third of his force. Unfortunately, the success of the revolt had been exaggerated and, before reaching their destination, Kearny and his men encountered a group of Californios intent on keeping more U.S. troops out of their homeland.
In the subsequent Battle of San Pasqual, 19 of Kearny's men and an untold number of Californios lost their lives. Initially, the dead were buried where they fell, but by 1874 the remains had been removed to the San Diego Military Reservation. Eight years later, the bodies were again reinterred at what is now Fort Rosecrans National Cemetery. In 1922, the San Diego chapter of the Native Sons and Daughters of the Golden West had a large boulder brought from the battlefield and placed at the gravesite with a plaque affixed that lists the names of the dead.
Another notable monument in Fort Rosecrans National Cemetery is the USS Bennington Monument which commemorates the deaths of 62 sailors in a boiler explosion aboard USS Bennington (PG-4). The Bennington, which had just returned from maneuvers in the Pacific, was anchored in San Diego Harbor. On July 21, 1905, the crew was ordered to depart in search for USS Wyoming (BM-10), which had lost a propeller at sea. At approximately 10:30 a.m., an explosion in the boiler room ripped through the ship, killing or wounding the majority of the crew. Two days later the remains of soldiers and sailors were brought to the post cemetery and interred in an area known as Bennington Plot.
At one time, the cemetery was called the Bennington Nation Cemetery, but in 1934 was named the Fort Rosecrans National Cemetery. Fort Rosecrans became a National Cemetery on October 5, 1934. The decision to make the post cemetery part of the national system came, in part, due to changes in legislation that greatly increased the number of persons eligible for burial in a national cemetery. Grave space in San Francisco National Cemetery then grew increasingly limited. In addition, southern California was experiencing a phenomenal population growth during this period, and there was a definitive need for more burial sites.
All available space for casketed remains at Fort Rosecrans was exhausted in the late 1960s, but cremated remains continued to be accepted. The recent addition of extensive columnbaria, in place of old chain-link fencing has allowed the interment of thousands of additional World War II veterans there. Once Fort Rosecrans National Cemetery has reached maximum occupancy the cemetery will be turned over to the National Park System and the grounds will be maintained by park employees.
In 1973, Fort Rosecrans National Cemetery was placed under the control of the Veterans Administration. In May 2014, the cemetery had assigned all remaining spaces available; new burials will occur at Miramar National Cemetery.[6] It was listed on the National Register of Historic Places in 2016.
Today, the Fort Rosecrans Memorial Day celebration is the largest Memorial Day festivity in San Diego. The Fort Rosecrans Memorial Day Committee consists of war veterans' organizations, their auxiliaries, and patriotic groups.

Fort Rosecrans National Cemetery has several war memorials, including:
-The granite and bronze memorial to the USS Wasp (CV-7) commemorates the members of the ship's company who were lost when their ship was sunk during the Battle of Guadalcanal on September 15, 1942.

-The San Diego chapter of the Native Sons and Daughters of the Golden West installed the San Pasqual monument in 1922 to honor those soldiers who lost their lives in the 1846 Battle of San Pasqual during the Mexican-American War. The monument is composed of a stone boulder with a bronze plaque mounted on it.

-The USS Ommaney Bay (CVE-79) monument is an etched granite memorial to the men lost in action when the ship was sunk on 4 January 1945.

-A monument dedicated to the Mormon Battalion was erected in 1998.

-The Patriots of America memorial was dedicated in 1999 by the California Society of the Order of the Founders and Patriots of America to honor all Americans who answered the call to arms.
The granite 3rd Infantry Division monument was dedicated to fallen comrades on February 16, 2002.
Several monuments have been erected in memory of the sailors lost in the Battle off Samar, October 25, 1944, a part of the Battle of Leyte Gulf (Philippines), and in subsequent battles of the Pacific:
-The USS St. Lo (CVE-63) and Composite Squadron VC-65 was erected in 1994.