On February 13, 1960, Florida A&M students and other members of the Congress of Racial Equality (CORE) held the first of what would turn into a year-long campaign of sit-ins to protest discrimination at department store lunch counters throughout downtown Tallahassee. After a week of similar protests, police began arresting the students in significant numbers. Despite the arrests, by March the FAMU students were joined by white students from Florida State. After 250 students were arrested, another 1000 joined a protest march that ended when police fired tear gas at the students. Although a white mob threatened the young people with guns and other weapons, the police only arrested Black men and women as the spring protests continued into summer. By 1961, the tactics of the police and white city officials derailed the movement. Students continued to boycott the stores, but integration would not come to Tallahassee until Congress passed the Civil Rights Act of 1964. On May 26, 1956, there were two female students from Florida A&M University who were named Wilhelmina Jakes and Carrie Patterson. These ladies paid to board a bus that was just about filled to capacity. Shortly after they were asked to stand by the bus driver because they were sitting next to a white women. After this the Florida A&M student body engaged in social activism. Then on February 20, 1960, the students conducted a sit-in at the Woolworth lunch counter. There were thirteen students and eleven of them got arrested. With this movement inspired a lot of others to join and give thanks to those students who protested.

Whites confront sit-in demonstrators next to the old Florida Theater at 118 Monroe. 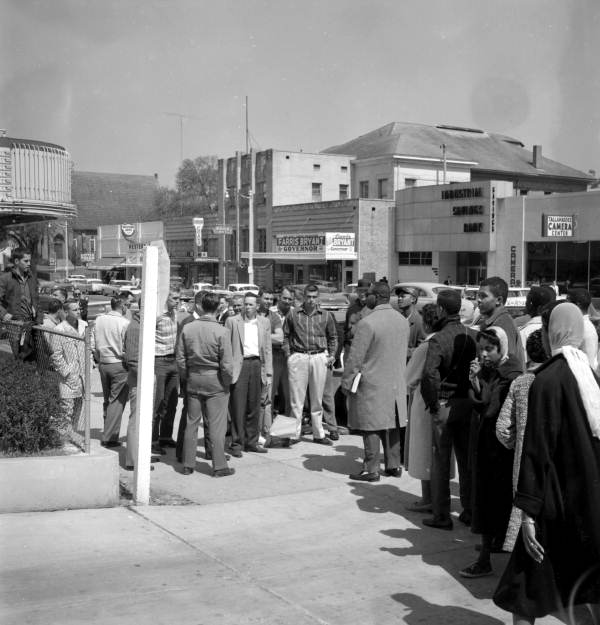 Florida A&M University students protest the arrest of other students during an earlier sit-in. 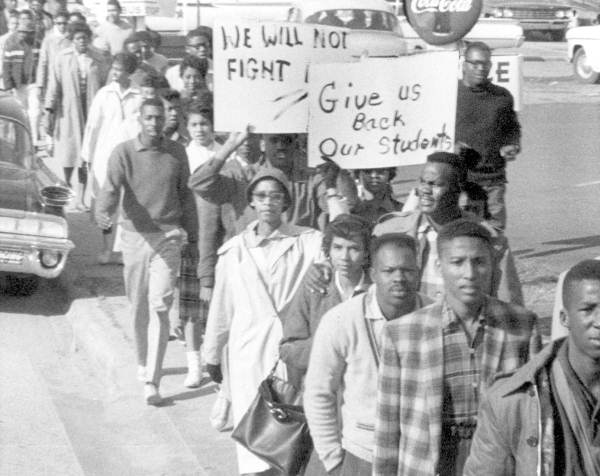 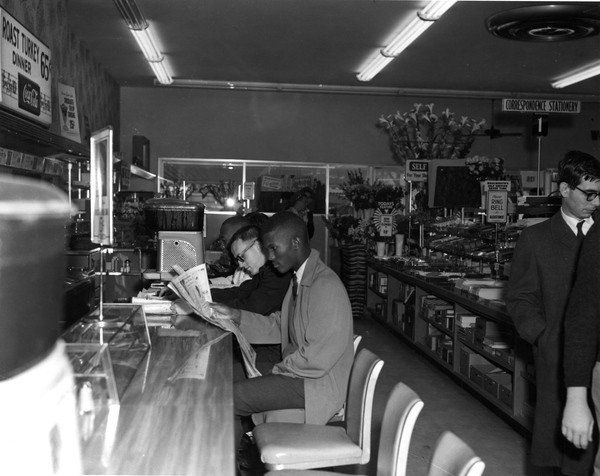 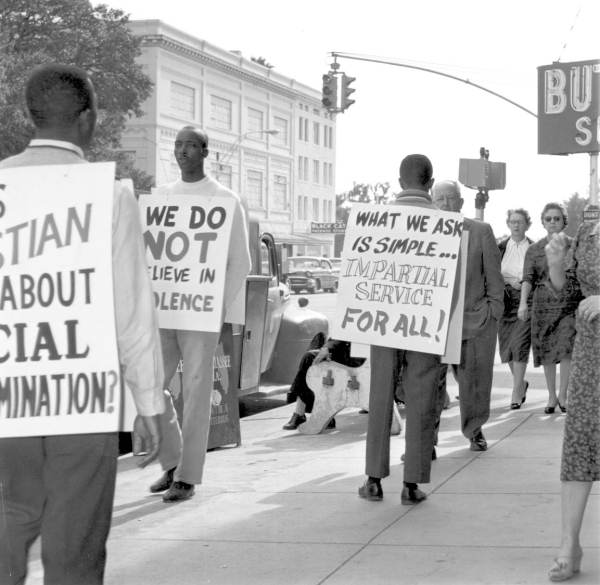 Sit-in at the Woolworth lunch counter 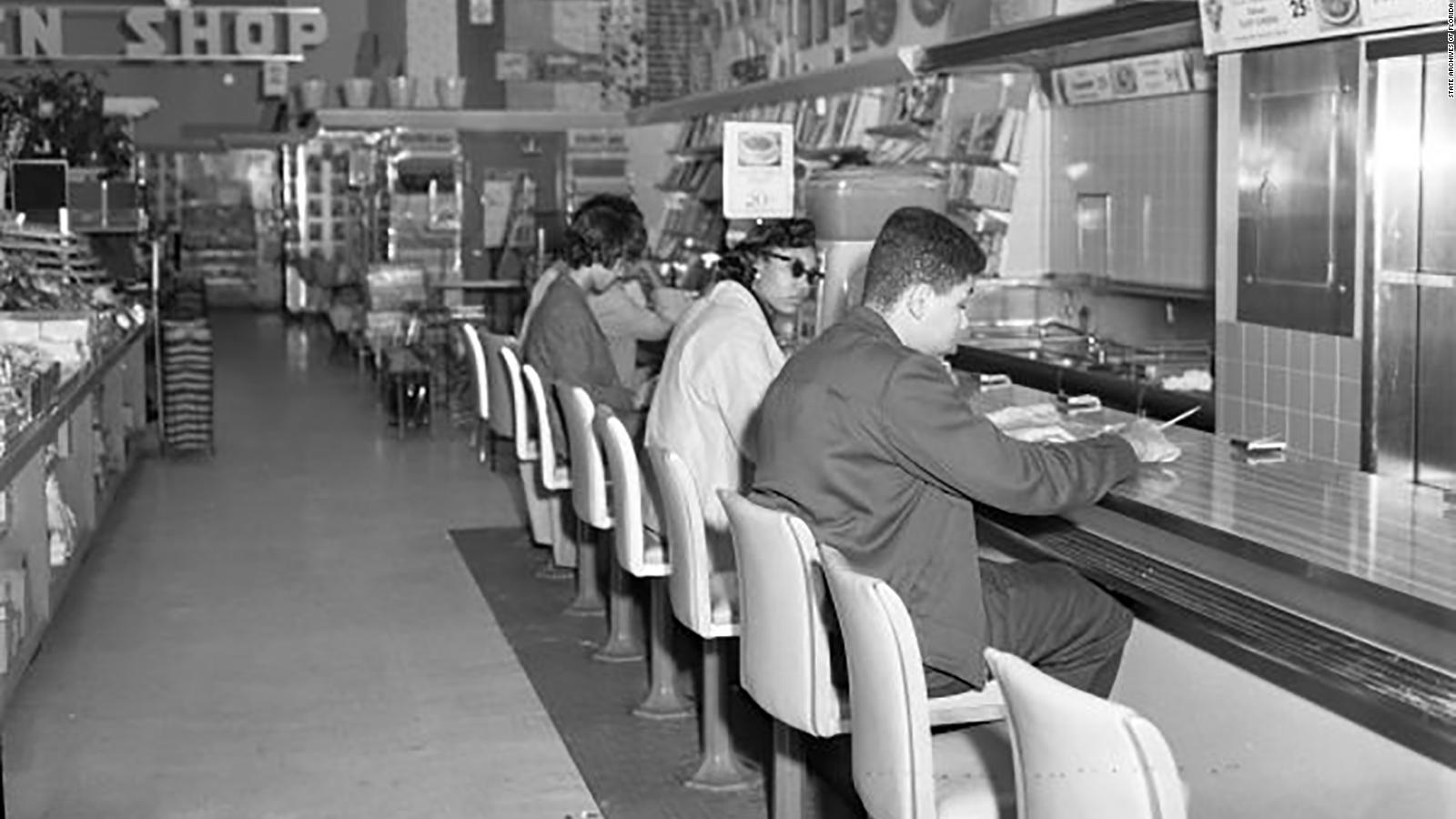 These protests occurred four years after the Tallahassee Bus Boycott, which took place in 1956. The Florida boycott happened shortly after the more famous Montgomery Bus Boycott that was initiated by Black women and men responding to the arrest of Rosa Parks. The Tallahassee boycott was also influential in challenging segregation and demonstrates a tradition of activism in this part of Florida. Another protest occurred in Florida in 1959 when two Florida Agricultural and Mechanical University students, Patricia and Priscilla Stephens, joined a CORE (Congress of Racial Equality) workshop at Miami University. The students led several projects leading up to the 1960 sit-ins in Tallahassee.

On February 1, 1960, four African American students began a sit-in against segregation at a Woolworth lunch counter in North Carolina. This local protest would lead to many other protests and launch a movement of direct action that would become one of the most influential events in the civil rights movement. The Greensboro sit-in led to many other protests, including the actions of eight Florida A&M high school students who also launched a sit-in at their local Woolworth counter on February 13, 1960. The children in this incident were not arrested and left after two and a half hours.

On March 5, more Florida A&M students conducted a sit-in. This was followed by a fourth sit-in on March 12th that also included white students from Florida State University. Around 240 students of both races were arrested during these events. Later in the day on March 12th, about 1,000 Florida A&M students in groups of 75 carried posters and headed downtown, these students asked for the release of the students that had been arrested. The local White Citizen's Council sent a group of armed white men to harass the students. The students chose to turn back at that moment but not before six additional students were arrested.

In different parts of Tallahassee, students were gathering around in response to the arrests. During these protests the police used tear-gas on the students causing several to develop burns and be sent to the hospital. During these protests, the police only arrested African American participants.The governor then ordered students to be confined to the campus. CORE decided to continue the sit-ins until December of 1960, they were generally alone and not supported. In 1961, the sit-ins had come to a standstill and the CORE chapter struggled due to the lack of support from outside organizations but continued to hold protests against segregation until the 1964 Civil Rights Act made segregation illegal.

Broader Context for the Protests

In the Florida newspapers it was reported that there were students that sat at a local lunch counter which served whites only to protest segregation. With those students’ actions began a student activism throughout the city that would send a message throughout the country. Furthermore, many new outlets reported on the peaceful protest however, eleven of the students were arrested and placed in jail. Wayne Santoro wrote an article that was published in Social Forces about a study which investigates the effect of segregationist murders, detailing his view on the Black protest and Black voting-rights policies. The author of the article explains more about his opinion on white violence is responsive to Black protest. He further details how the violence stimulated government response to the protests. He argues, the segregationist violence seemed to help the movement and win the southern suffrage only with help of the audience. This movement caught a lot of attention all over the country.

The Woolworth sit-in started a civil rights movement when four Black freshman students of North Carolina Agricultural and Technical College sat down and ordered coffee in Greensboro, North Carolina on February 1, 1960 and stayed until closing time. This act spawned a wave of activism in nearly every southern state. Inspired by these protests, on February 20, 1960 several Florida A&M students waged a sit-in to protest segregation in 1960. The sit-in took place in an old brown building located on the corner of Monroe street and was connected to the Hilton hotel, and College Park is right next to the building and on the other side is the Museum of Florida History. The building was occupied by Woolworth at the time and the lunch counter is where the African American students started the sit-in. The building is still there today and is 60 years old now.

An African American poet names Paul Dunbar wrote short stories and poetry about negotiating the difficulties of segregation. He furthermore explains, his daily struggle and how he tries to be the man of the race in the face he can be. This is another source where the poet explains his daily struggle in his life because of his race, it relates to the segregation sit-in because African Americans are fighting for the civil right movement and stop being mistreated due to the color of their skin.

Another source, Michael Dennis is a professor at the University of Fl who detailed the life of Luther P Jackson, who was an instrumental leader of the voices for racial justice. This professor explained how he was a man who believed education was the core for social change. But was also aware of racial inferiority infected African American socially and in the education system. Therefore, the professor discussed how Luther P Jackson understood that the Blacks had to change their minds before they could change the world. This professor was giving his input on how the African Americans should handle a situation when dealing with the segregation protest where people can avoid getting arrested by trying to get their voices heard.

We have seen many actions thus far, however the Florida A&M college student sit-in was just one example that lead the way for others to share their thoughts and expressions of the injustice that Black people experience. This bravery prompted others that experienced segregation to voice their concerns and protests and many have been speaking out ever since.