A fixture of downtown San Diego for over a century, the Jessop Street Clock was once of the city's most famous attractions. The intricately designed clock was the brainchild of Joseph Jessop, and was designed by one of his employees, Claude Ledger. The Jessop clock made its public debut at the 1907 Sacramento State Fair, where it won a gold medal. The clock was moved to Horton Plaza in 1984.

This clock has been keeping time in San Diego since the 1907 World's Fair. 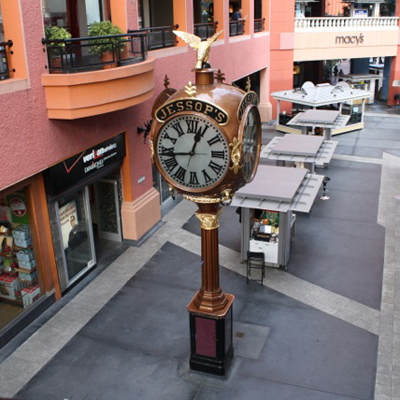 A close-up view of the clock, showing the wooden bear which has remained inside since 1907 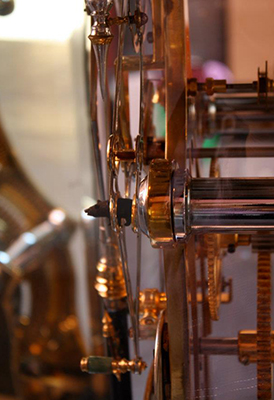 Few visitors to San Diego's Horton Plaza take notice of the large, ornate clock near its center, but the Jessop's Street Clock was once one of the city's most well-known attractions. The clock originated with Joseph Jessop, when he was still living and operating a jewelry shop in England. He and his wife traveled to Switzerland, where clocks adorned many businesses and public spaces. He was especially interested in one intricately designed clock, and drew plans for a replica of the clock for himself.

Jessop moved his family and business to San Diego in 1890, and in 1904, he began making plans for a clock like the ones he'd seen in Switzerland. The construction of the clock was the work of Claude D. Ledger, a Jessop and Sons employee and graduate of the Elgin Watch School.

A foundry was built behind Jessop and Sons on F Street in downtown San Diego. Every part used in the clock was manufactured in the foundry. The clock also includes several gemstones--agate, jade, topaz, and tourmaline--all mined in Jessop's own mines in Mount Palomar and cut by hand in his shop. At the time, the Jessop clock was the most jeweled clock in the United States.

Construction of the clock took fifteen months. It stands 22 feet tall and features 20 different dials, twelve of which give the time in locations around the world. Many of the clock's moving parts are gold-plated, giving it an estimated worth in the millions.

The Jessop clock made its public debut at the 1907 Sacramento State Fair, where it won a gold medal. (The medal, which was displayed openly with the clock, disappeared.) While on display in 1907, a small child became entranced by the clock's movements. At that time, the movement was not yet encased in glass, and the child placed a small wooden bear on the swinging pendulum. The bear proved impossible to remove and has remained on the pendulum ever since, eternally swinging with the clock's pendulum.

The clock stood outside Jessop and Sons for eighty years, until the business relocated to Horton Plaza in 1984 and the clock was moved to the new location. Over its long lifespan, the clock has kept time flawlessly, stopping only on a few occasions. The first of those occasions, was on the day that Claude Ledger died. The clock stopped for no apparent reason--a coincidence which was written about in Ripley's "Believe It or Not."