The Villisca Axe Murder House that still stands today in the small town of Villisca Iowa was home to Josiah B. Moore, his wife, and their four young children. On the night of June 10, 1912, the entire family, including two young friends of the family, Lena Stillinger and Ina Stillinger, were found brutality murdered in their beds. The tragedy shocked the town of Villisca and the entire state of Iowa. To this day, over a hundred years later, the crime goes unsolved. There have been several owners of the house after the 1912. In 1994 Darwin Linn bought the property and renovated it back to the condition as it was in 1912. The Iowa Historic Preservation Alliance awarded the Moore house the "Preservation at its Best" award in the small public category, also in 1998 the Moore home was added to the National Register of Historic Places. Today, tours of the home present a captivating insight into what the Moore home looked like in 1912. It includes the facts of the shocking murders and the events leading after.

The front of the Villisca Ax Murder House 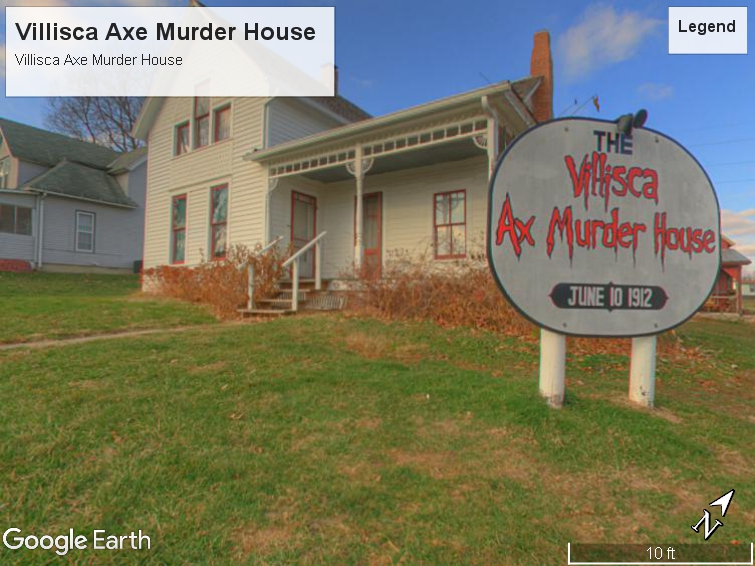 This is the down stairs bedroom off from the parlor that Lena and Ina Stillinger slept in and were murdered in. 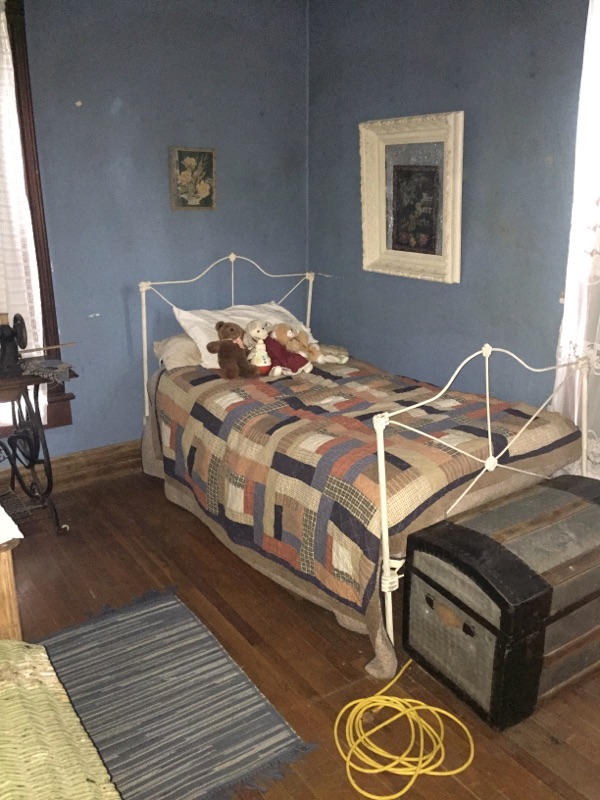 This is the bedroom Josiah and Sarah Moore slept in and were murdered in. 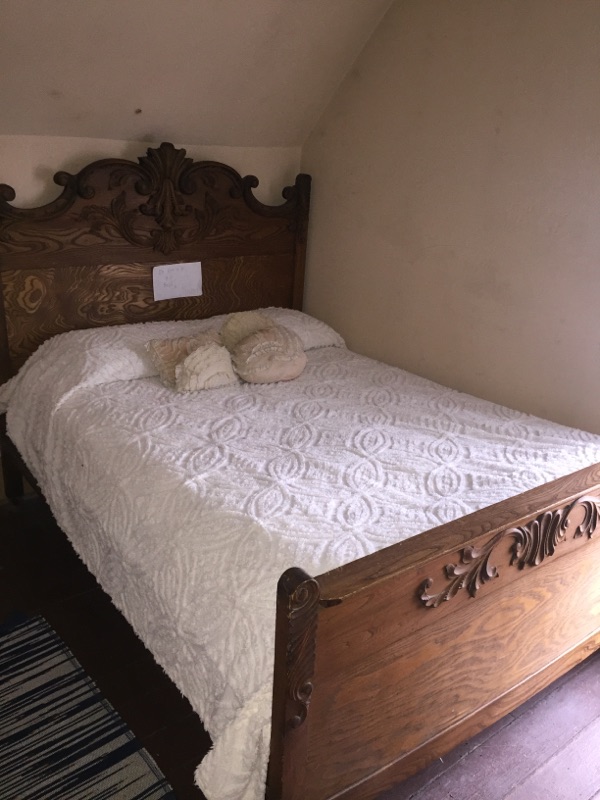 Another view of Josiah and Sarah Moore's bedroom 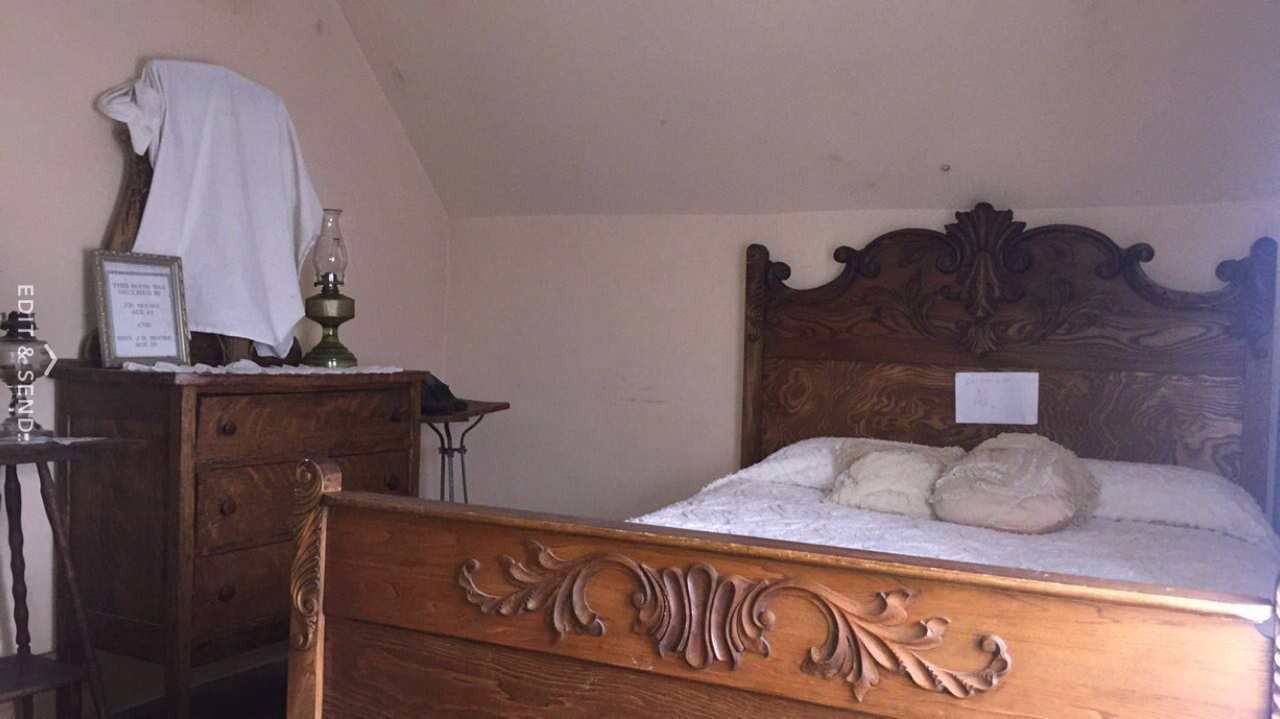 In the early morning of June 10, 1912 the Moore family, along with two young family friends, were found brutally murdered by an axe. The family was last seen Sunday night at their church’s children service. The Moore's neighbor, Mrs. Ernest Peckham, became suspicious that something was wrong when the early rising family's house had no movement. Ross Moore, the brother to Josiah Moore, was called upon because of the suspicion. [1] He went to the house to investigate. When Ross Moore went into the house he saw the two Stillinger girls’ mutilated bodies in a room on the first floor. Ross was not able to continue through the house from pure horror. He walked out of the house and asked for someone to find Marshal Horton and Doctor Cooper.

Marshal Horton arrived at the house. He walked upstairs, finding Mr. and Mrs. Moore lieing in their beds with their faces covered by clothing. When Horton removed the clothing he found their faces brutally hacked. He noticed a kerosene lamp near the foot of the bed on the floor. Horton went to the next room finding the four Moore children in the same condition as their parents. Their faces hacked beyond recognition and covered by clothing. The Stillinger girls, who were found dead in the downstairs bedroom, were also brutally hacked. One of the Stillinger girls had her arm flung out with a slash from the axe across it. It was as if she had tried blocking a blow. Another kerosene lamp sat on the floor, still lit but almost empty. There was a slab of bacon wrapped in cloth under the foot of the bed. Near the bed a hatchet leaned against the wall covered with blood and strands of hair.

A dress hung over the glass portion of the parlor door to block out any light, all the windows were locked, every shade pulled down. One shade in the kitchen had bloody finger prints on it. On the table was a basin where the murderer had clearly washed his hands because it was filled with reddened water. Next to the basin was the other portion of the slab of bacon found in the downstairs bedroom. [2] In the stove were several pieces of half-charred paper, mostly deeds and legal documents. [3]

By the time Sheriff Jackson at Red Oak and Coroner Linquist at Stanton arrived at the house and got the scene under control. The town of Villisca was in an uproar; there were 400 cars and a thousand people in the streets. The national guard was called to restore order in the town.[4] Stories circulated, and newspapers were eager to print anything their readers would like. [5]

Elmer Noffsinger’s famous blood hounds were telegraphed and arrived that night. The scent from the axe handle seemed strong. It led the hounds along a trail to the West Nodaway River, where a bloody handkerchief was found and the scent lost. The hounds tried for a second time and again lost the trail at the river. After this, the inquest began. Doctor Cooper gave the unofficial time of death at about five to six hours previous to the discovery.

There were many suspects to the case, yet no one was ever convicted. Persons accused provided alibis and leads went cold. By the end of the week the reward for the arrest and conviction of the murderer totaled over $2,000.

There were several men accused of the murders years later. In 1914 by a Kansas City detective named J.N. Wilkerson was hired. Wilkerson accused a meat packing worker by the last name of Mansfield whom the jury refused to indite. Then Wilkerson attempted to charge a prominent Villisca business man of hiring Mansfield to murder Josiah Moore. The jury again found Mansfield innocent. In 1917 Reverend Kelly made a confession to the murders of the Moore family and Stillinger girls. He claimed a voice told him to “slay utterly." At trial Kelly’s attorney argued that third degree methods were used on Kelly to get a confession. On the twenty-first day of the trial the jury was discharged, with failure to find a verdict. In Kelly’s second trial he was found not guilty. The official trial records disappeared and Kelly was never heard from again.[6]

After the murders, the Moore’s home had several owners and tenants. In 1994 the house was in danger of being destroyed because of bad conditions. Darwin and Martha Linn purchased the house in the hope of preserving the community’s history. They restored the home to its 1912 condition. The Linns used old photographs, testimony, and records from the coroner’s inquest and grand jury hearings to place antique furniture were the Moores had once placed theirs. The Linns wanted the house to look as close as possible to its appearance the night of the murders.

In 1997 the Moore home was added to the National Register of Historic Places. Many visitors to this day come to the Villisca Axe murder house. The mystery of the murderer and the history behind the story attracts people from all over the Midwest and the country. Several years ago the house opened overnight tours. This attracted many paranormal investigators and ghost buffs to the house as well. [7]

[7] Taylor, Troy. The Ghosts of the Villisca Ax Murder House. Ghosts of the Prairie America's Most Haunted. 2007. Accessed 4/8/17. http://www.prairieghosts.com/villisca.html.