The Henry Doorly Zoo and Aquarium is one of Omaha's most notable locations, as it is one of the top zoos in the world. Its primary goals include research about animals, conservation of animals, education of people about animals, and recreation.

Margaret Doorly, the donor of the original start-up money for the Henry Doorly Zoo (pictured left). Courtesy of The Omaha World Herald 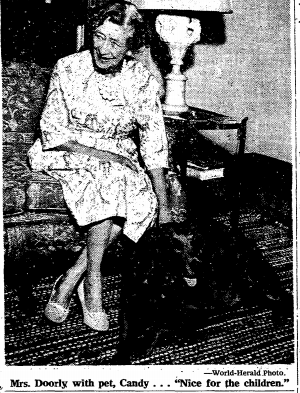 1965 Original Layout of the Omaha Henry Doorly Zoo alongside artist's depiction of zoo. Courtesy of The Omaha World Herald 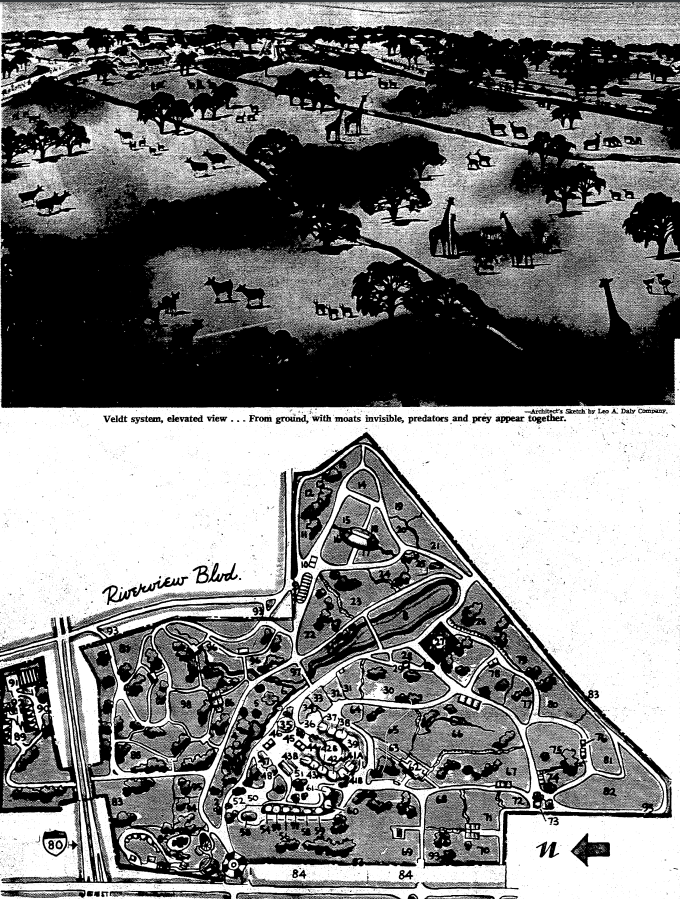 The Omaha Henry Doorly Zoo and Aquarium has a long history.  The zoo first began operations in 1894, though it had a different name.  Riverview Park opened its doors in 1894 on the spot that would become the Henry Doorly Zoo and Aquarium.  In these early days, it had quite a different menagerie compared with today.  This consisted entirely of North American animals, like raccoons, wolves, bears, and bison.  In fact, in 1897, Riverview Park received two buffalo for its collection from William "Buffalo Bill" Cody. [1] Someone must have thought this little park had potential.  In 1903, Park Commissioner Cornish insisted on expanding the park, and did so with the purchase of nearby Syndicate Park.  He claimed that Riverview needed to be protected from encroachment of industrial factories that were creeping into Omaha at the time.[2]

Of course, Riverview Park was not just a zoo.  It also contained a baseball diamond that was sometimes used by the African American league in Nebraska to play their ball games.[3] Riverview Park endured for some time after the 1903 expansion without significant change, and finally in 1935 Park Commissioner Frank Frost led the way in the next series of expansions after Riverview Park received $60,500 from the federal government for expansion. It was during this time the Works Progress Administration (WPA) built the first of the park's cat cages.  It was also during this period that new fences were laid, shelters were created, and a new pavilion was added to the park.[4]

Riverview Park continued on from this until 1955, when a proposal from the newly created Omaha Zoological Society asked that the city of Omaha pay for the construction of a new Riverview Park Zoo.  Though no official payment was made,[5] the plans were laid out for the future, which would arrive perhaps a bit sooner than most people were expecting.

In 1963, Mrs. Margaret Hitchcock Doorly donated $750,000 to the Omaha Zoological Society for the purpose of building a brand new zoo on the spot of the old Riverview Park Zoo.  She called the old zoo "pathetic" and believed the city needed something better.  She asked that the new zoo be known as the Henry Doorly in honor of her late husband, the former publisher and chairman of the Omaha World Herald.[6]  This was an exciting time for the zoo, and plans were quickly laid for construction.  The best people in the field of zoo management were contacted, such as Dr. Warren D. Thomas, the former director of the Oklahoma Zoo.  Dr. Thomas believed that the zoo was a bigger tourist magnet than even baseball.  He also held the opinion that zoos were also both "living museums" and "outdoor classrooms" for people to see and learn about animals.[7]   In 1965 the Omaha Zoological Society revealed the official layout of the Henry Doorly Zoo.  Slated to open in 1966, the new zoo was nearly ready to be revealed.[7]

The Henry Doorly was not just a zoo either.  It had a hand in very active breeding programs, such as its Siberian tiger captive breeding program, which it coordinated with the San Diego Zoo, Bronx Zoo, and the International Union for Conservation.[8]

As for the zoo itself, the site was constantly expanding.  One of the largest improvements was in 1991, with the construction of the Lied Jungle.  Named after a man who made his money in Las Vegas real estate, the $15,000,000 project was the largest indoor rainforest in the world.  It was three and a half times larger than the next biggest indoor rainforest.  A technological marvel that even included a 20,000 gallon "hippo toilet",[9] the Lied Jungle was one of the greatest additions the zoo ever made.  Constantly outdoing itself, the zoo's next ambitious project was the construction of an aquarium.  In 1995, the Scott Aquarium opened to the public.  At a price tag of $14,000,000, the aquarium is the largest aquarium building in North America.  The aquarium was closed for renovations from 2011 to 2012, but opened again in 2012, revamped and ready to educate.  The process was so significant, that is 2012 the zoo underwent yet another name change, becoming the Henry Doorly Zoo and Aquarium.[10]  The next advance the zoo made was the completion of its Desert Dome project in 2002.  The most expensive project in zoo history, the Dome cost $30,000,000 to build, and is the largest glazed glass geodesic dome in the world.[11]

To this day, the Omaha Henry Doorly Zoo and Aquarium continues to fulfill its mission that was established in 1965.  That mission of research, conservation, education, and recreation has helped to make the zoo what it is today, and hopefully will continue to do so in the future.