One of the first groups of Freedom Riders - white and black civil rights activists who tested compliance with federal laws barring racial discrimination in interstate travel - passed through this location on their way to Anniston where they were attacked by white supremascists. The Freedom Riders had departed from Atlanta that morning on the way westward and stopped at the bus station at Villa Rica just hours before they were attacked.

Site of former Greyhound Bus station on South Carroll Street 14 May 2015. The buildings were recently rehabilitated although not restored to Secretary of Interior Standards. One interior wall revealed the old bus station sign confirming the site. 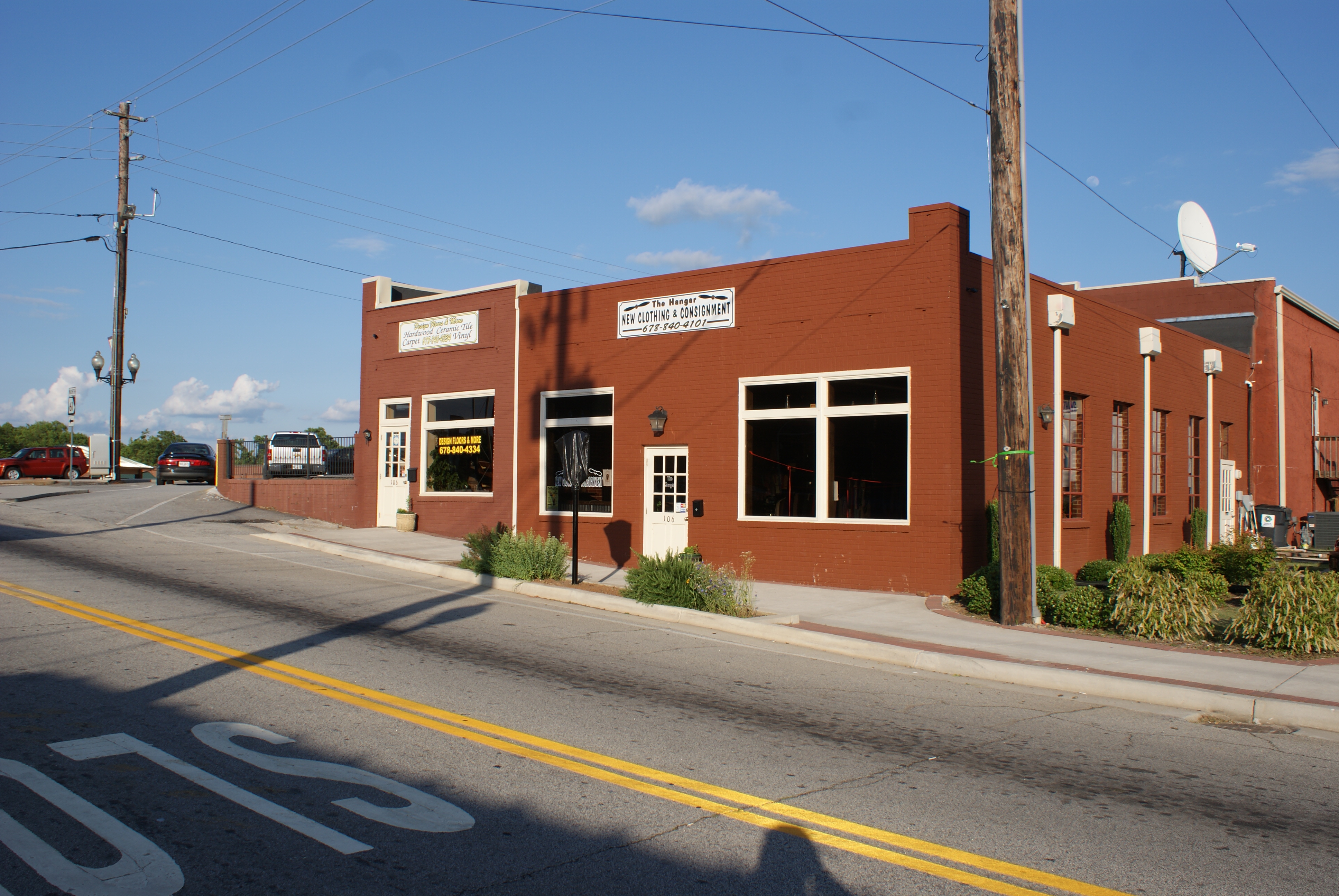 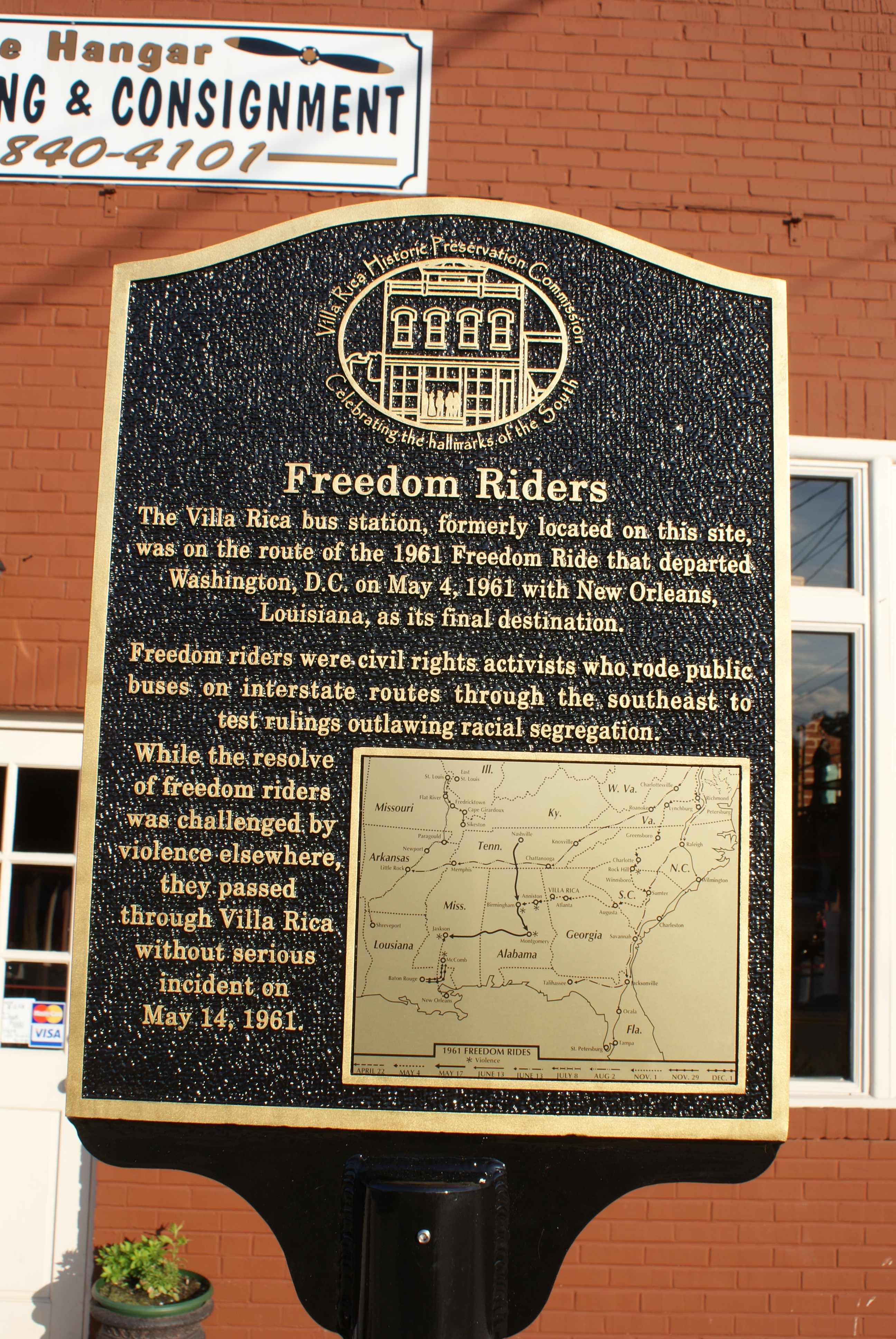 Parts of this route in Virginia, Georgia, and Alabama became part of the bus routes used by Greyhound Bus and Trailways bus lines, notably the route from Athens, Georgia to Anniston, Alabama played a role on Mother’s Day Sunday, 14 May 1961 in a history tied to Villa Rica.  This was the main southern east-west highway before Interstate 20 was opened in 1977.

The first effort for a "Journey of Reconciliation," was attempted in 1947 by the Congress of Racial Equality (CORE).  CORE was one of several groups working on civil rights by and during 1960s. In 1947, CORE sought to test the 1946 Irene Morgan v. Commonwealth of Virginia case which the U.S. Supreme Court declared segregated seating of interstate passengers unconstitutional.  Meeting heavy resistance and several participants serving time in North Carolina chain gangs the attempt failed.  Almost 15 years later CORE revived and dubbed the Freedom Riders. CORE became one of several groups working on civil rights during the 1960s.  Besides bus systems, CORE south to integrate the railroads and airport terminals.  CORE’s original Freedom Ride is the one that passed through Villa Rica.  Other rides organized by various groups continued through 1961.

The Freedom Riders was an effort to test President Kennedy on his civil rights stand and the US Supreme court ruling 1954 Brown v. Topeka Board of Education throwing out separate but equal which was established law from Plessy v. Ferguson (1896).  Blacks and sympathetic whites boarded buses in Washington DC on 4 May 1961 to arrive on the anniversary of Brown on May 17 in New Orleans.  Whites would ride in the back, Blacks in the front and use the “Whites Only” and “Blacks Only” opposite their race.  This bus route passed through Villa Rica, to Anniston, and into history.  From April 1961 to December 1961 there were over 60 Freedom Rides.  Other routes originated from Washington, St. Louis, Nashville, Atlanta, and one from Newark, New Jersey with rides originating on various dates throughout 1961.

The route through Villa Rica experienced violence before reaching the Georgia.  The Washington, Richmond, Lynchburg, Virginia and Greensboro, North Carolina reported no incidents.  In Charlotte, North Carolina one was jailed when he attempted to have his shoes polished in a whites only area.  In Winnsboro, South Carolina two were arrested and released.  The route continued through Sumter, South Carolina.  Entering Georgia at Augusta to Athens where the Freedom Riders began to follow the Bankhead Highway.  They arrived in Atlanta on13 May 1961.

In Atlanta the Freedom Riders stayed with students at Atlanta University Center.   The next morning about 11:00 AM the Freedom Riders boarded a bus at the Grayhound Bus station in Atlanta to ride into history. Of these fourteen riders on the bus seven were Freedom Riders: Genevieve Hughes, Bert Bigelow, Hank Thomas, Jimmy McDonald, Mae Frances Moultrie, Joe Perkins (the field leader), Ed Blankenheim.  Two journalists, a Greyhound station manager and unbenounced to the riders two undercover Alabama Highway Patrol men.  The balance were regular passengers with no connection to protest.  Another bus would leave an hour late with the remainder of the Freedom Riders.  Congressman John Lewis, who spoke at the marker unveiling, covered part of the trip from Washington, but left before Atlanta and was not present for the famous 14 May 1961 trip because he was attending an interview for a fellowship.  He would later travel another Freedom Riders trip originating in Nashville where he attended college.

The bus traveled down Bankhead Highway, also known as U.S. 78 since the 1926 numbering of the US Highway system.  Traveling though Austell, Douglasville, Winston and arriving in Villa Rica the Freedom Riders probably arrived around 12:30 PM depending on the number of stops actually made en-route.

Leaving Villa Rica the bus likely took Wilson to Westview or connected straight into the Bankhead Highway corridor that first appeared on the Villa Rica map when Bankhead was rerouted through town in the 1930s.  Passing west through Temple and Tallapoosa into Alabama, the bus approached Anniston, Alabama.  During the entire Georgia portion of the trip there was not a single incident.  Palmer commented “that the reception the group got in Georgia ‘makes me feel fine.  I would be greatly pleased if we could get all the way to New Orleans without incident.’”  An editorial appeared in the Atlanta Constitution a few days later noted while there were mobs lurking but there was no violence making a case how lucky, and law abiding, Georiga was during the Freedom Rider’s stay in the state.  The group of 17 – nine White and 8 Blacks –  flew from Birmingham to New Orleans a few days later because of the violence and bomb threats in Alabama.

In Alabama, the driver of a southbound Greyhound bus waived Freedom Riders’ bus driver O.T. Jones over and warned him “There’s an angry and unruly crowd gathered at Anniston. There’s a rumor that some people on this bus are going to stage a sit-in. The terminal has been closed. Be careful.”  The driver, under encouragement, continued into Anniston where it was later noted by Genevieve Hughes “It seemed that everyone in the town was out to greet us.”

About 1:00 PM central time, the bus pulled into the closed Anniston station.  A white mob of about 50 to 200, the number varies in various accounts, emerged and attacked the bus.  There were no police around despite the bus station manager warning local police of potential violence.  By time the police arrived and dispersed the crowd the bus was damaged with broken windows and dents.  Eventually a path was cleared by the police for the bus to exit the station.

The bus continued under police escort until the Anniston city limits. The police abandoned the escort leaving the trail of cars and trucks to continue the pursuit of the bus. Along Highway 202 east of Bynum, Alabama a car passed the bus, slowed down eventually forcing the bus to stop.  The tires damaged in the Anniston attack deflated leaving the bus with two flat tires six miles southwest of Anniston only a few hundred yards from the Anniston Army Depot. The driver left the bus to enter Forsyth & Son grocery store to call for assistance with the tires.   Arriving on the scene was 30-40 cars of pursuers who attacked the bus beating the disabled vehicle and attempting to turn it over.  During the attack at bundle of burning rags was thrown in a broken window igniting the upholstery.  The smoldering bus along a Calhoun County, Alabama roadside quickly made national news and into history

A replica of the bus used is now preserved at the Birmingham Civil Rights Institute. The bus is also featured in the artwork at the Villa Rica O’Charlie’s mural as part of the city’s history.

On 16 May 2011 the Villa Rica Historic Preservation Commission marked the 50th anniversary of the Freedom Riders pass through town on 14 May 1961 – the same day the bus was attacked in Anniston, Alabama.