Founded in 1927, Hastings Museum is the largest municipal museum between Chicago and Denver. The museum features a 70-foot wide screen, a planetarium, exhibits housing dozens of animal species set in their natural habitats, and displays about the history of the region and its people. 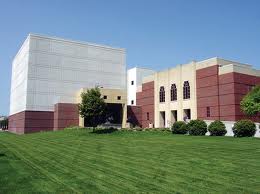 Albert Brooking spent most of his life gathering artifacts and specimens from all over the United States. As much as he enjoyed amassing this assortment of objects, he was not satisfied with just collecting. He dreamed that one day he would be able to house his collection in a Museum and share it with everyone.

Like today, in the early 1900s Hastings hosted many cultural and social events. The idea of building a Museum to add another cultural experience was strongly supported by the Hastings Chamber of Commerce. The Chamber formed a Museum Committee on June 8, 1926. The committee soon petitioned to acquire space in Highland Park for the Museum.

Hastings City Council donated the site in Highland Park for the construction of a Museum. They also agreed to provide salaries for two Museum employees and to heat the building – but the city could not afford to construct a building. Instead, a temporary location was secured in the Hawthorne school building, and Brooking was placed in charge of the Museum. Work began in November 1926.

The Museum’s collections grew rapidly and five years later was bursting at the seams. In January 1932, the Board of Education passed a motion to lend the Morton school building to the city for use as a Museum. The Museum opened at that site on April 17, 1932.

The Great Depression brought public relief programs funded by federal grants. The grants were designed to employ people and aid in projects that would benefit the public. In 1935, the city began applying for federal grants to help construct a Museum building. Funding through the Work Projects Administration (WPA) came in the fall of 1937.

Long before the building was complete, work began on the detailed animal dioramas. For example, the time consuming task of creating foliage yielded more than 500,000 hand-made leaves! After countless hours of work, the Hastings Museum building was dedicated during Jubilleum Days on June 15, 1939. A highlight was the dedication speech delivered by Dr. Charles Abbott, secretary at the Smithsonian Institute in Washington, D.C.

Dr. Abbott’s speech was delivered after a grand introduction orchestrated from Washington. Vice President John Garner began the festivities by pushing a button in Washington that set off a charge of dynamite across the street from the new Museum building!