Located behind the Entler Hotel, the Rumsey Steamboat Museum was built in 1988 to house the Rumseian Experiment, a working replica of James Rumsey's 1787 steamboat constructed for the bicentennial of Rumsey's original, on 1987. Built to resemble stables for the Hotel, the Steamboat Museum houses some exhibits of Rumsey's life an inventions in addition to the replica. The Boathouse also has a mural by artist Larry Drechsler showing the bank of the Potomac during the demonstration of the steamboat on December 3, 1787.

Replica of the Rumsey Boat in the 4th of July Parade. 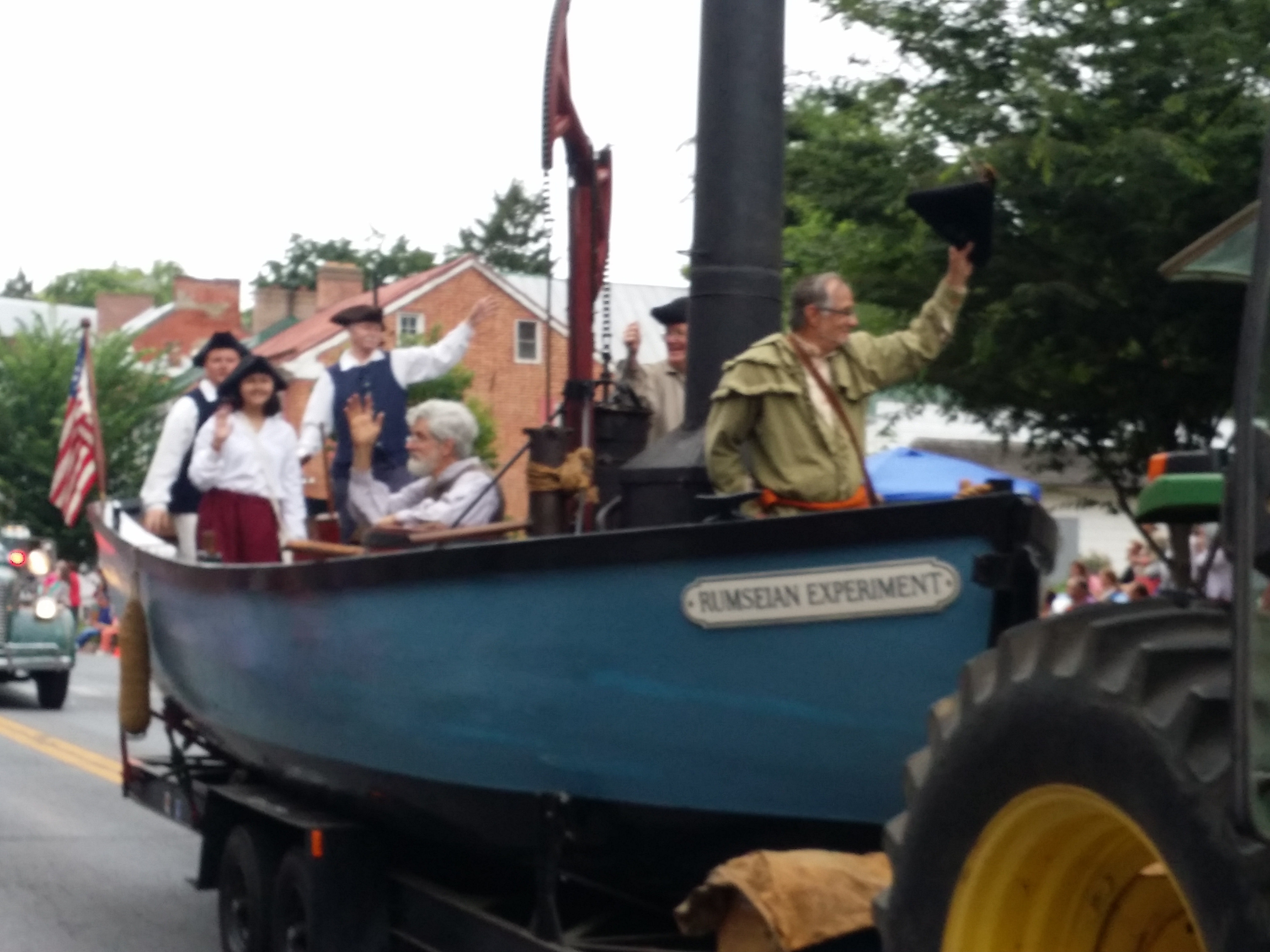 James Rumsey is an inventor, credited with inventing the steam engine and having the first successful test of the steamboat. He was born in 1743, in Cecil County, Maryland, but his family moved to Berkley County, Virginia. Rumsey was mechanically minded and became a miller, mill mechanic, and designer, canal builder, blacksmith, and rustic architect. Rumsey kept an inn in Berkley Springs and created the first bath houses there.[1] Rumsey met George Washington at these bath houses and had a credible connection for his inventing. Washington hired Rumsey to build a “dwelling House, Kitchen, and Stable” on his Bath property.[2]  Washington also wanted Rumsey to supervise operations of the Potomac Company, Washington’s enterprise to make the Potomac River navigable from Cumberland to Georgetown.[3]

Rumsey’s time working on the Potomac fit with his work on steam power. The first self-propelled boat was a pole boat. Carriage of the boat was fitted with a bank of poles that dragged the river bottom to propel the boat forward.[4] This design was not very effective in propelling the boat forward.

1785 brought Rumsey to Shepherdstown with his work with the Potomac Company. Rumsey’s contact with George Washington and Benjamin Franklin may have sparked his invention of the steam powered- water jet propelled boat. Rumsey made his first demonstration on December 3, 1787, 20 years before Robert Fulton’s boat. In 1788, Rumsey published “A Short Treatise on Steam,” then he went to Philadelphia to seek help from the American Philosophical Society. Rumsey demonstrated his steamboat invention for Washington and received certification of the event from Washington. Washington wrote “The model & its operation upon the water … not only convinced me of what I before thought … quite impractical, but that it might be turned to the greatest possible utility in inland navigation.”[5]