The Welsh-American Heritage Museum, formerly the Oak Hill Welsh Congregational Church, is located in the village of Oak Hill, Ohio. Welsh miners from Cardiganshire began immigrating to Ohio as early as 1818. Some of them were Congregationalists who would establish themselves in Jackson County and form a church in 1832. Nine years later, the church moved to Oak Hill. Following decades of decline, the congregation disorganized in 1962. In 1972, local residents of Welsh descent purchased the former church for the intention of creating a museum of Welsh culture. On May 8, 1972, The Welsh American Heritage Museum, Inc. was created. At that time it was the only Welsh Museum in the U.S. The group set about collecting all items pertaining to the preservation of Welsh heritage and culture. 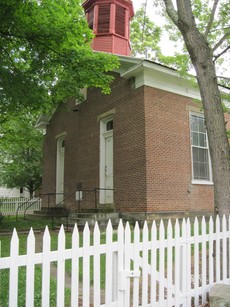 Inside the Welsh-American Heritage Museum. 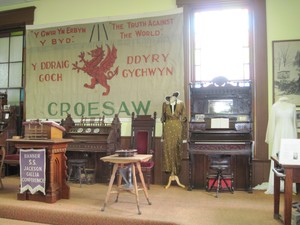 The front of the Welsh-American Heritage Museum. 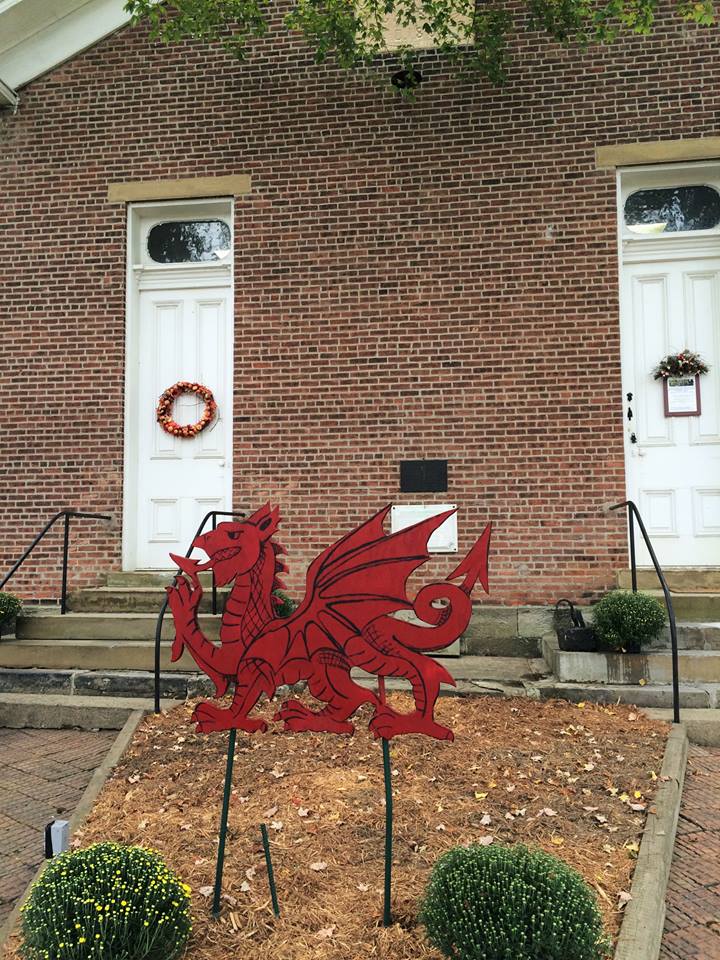 In 1818, an innkeeper named John Jones Terpack organized a group of six families from Kilkennyn in Cardiganshire, Wales who were interested in resettling in the United States. The group left from Liverpool, England and landed in Baltimore, Maryland. In Pittsburgh, Pennsylvania the group purchased two flatboats and began their journey down the Ohio River toward Paddy's Run, near Cincinnati, Ohio. In Gallipolis, Ohio, the party stopped to rest for the night, but the next morning the party's flatboats were gone. One explanation for the disappearance of the boats was that a storm tore the boats loose and they floated down the river. Another story is that the women in the party cut the boats free during the night because they were unwilling to continue onto Paddy's Run.

After the boats were lost, the group moved inland, and shortly past Centerville, Ohio, they came across land that looked similar to their former home of Cardiganshire. They elected to establish their homesteads in the area. Twelve years later, the Reverend Edward Jones visited the Welsh settlement, and after he returned to Wales in 1837, he published The American Traveler, a pamphlet for individuals interested in migrating to the United States in which Jones recommended the counties of Jackson and Gallia. In the 1830s and 1840s, news of the area led to what has been called the Great Welsh Tide. During this time thousands of Welsh immigrants came to settle in the region.

Many of the Welsh immigrants were Congregationalists, some of whom established a church in Jackson County in 1832. Nine years later, the church moved to Oak Hill, but their church building was not finished until 1869. The church is a brick structure, made locally at the Aetna Brickyard, with a tin roof and foundation of sandstone. Its primary builders, Isaac Parry and Thomas Herbert, produced a Greek Revival structure. Although just one story tall, it features a bell tower atop the roof. The building as a whole is a simple rectangle (though the bell tower is octagonal).

Following decades of decline, the congregation disorganized in 1962; local Baptists bought the building, but after nine years they moved to a new structure. In 1972, local residents of Welsh descent purchased the former church with the intention of creating a museum of Welsh culture. On May 8, 1972, The Welsh American Heritage Museum, Inc. was chartered by Ted Brown, Ohio Secretary of State. At that time, it was the only Welsh Museum in the U.S. The group set about collecting any items pertaining to the preservation of Welsh heritage and culture. It has since become associated with the Welsh studies center at the University of Rio Grande. In 1978, the church was listed on the National Register of Historic Places, qualifying both because of its architecture and its role in local religious and cultural history.