Dating from 1835, Hopkinsville’s first House Museum (Lone Oak) represents a transition from the Federal style of architecture to the Greek Revival. Featured in one of New York City architect Minard Lafever’s house plan books, it is one of only three documented Temple Form Greek Revival houses ever built in Hopkinsville. One was torn down at the beginning of the 20th Century, and the other survivor is the Dillard House (also from a design by Lafever), which is now Planters Bank. Lone Oak was altered in 1880 with the addition of two upstairs front rooms. 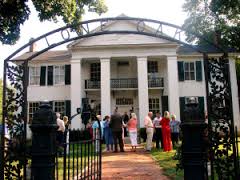