Fort Guijarros and the Battle of San Diego

Found today within the Cabrillo National Monument, Fort Guijarros was an old Spanish fort completed in 1797 to protect Spain's hold on the town of San Diego and its bay. In English, it stands for "Fort Cobblestones," which is derived from the fact that when ships came San Diego Bay's Point Ballast, the crew would gather stones from the point to ballast their ships; ballasts were like weights that kept ships from tipping over when lateral winds came through. In 1803 the only action between the US Navy and the forces Spain along the Pacific Coast took place when the fort fired on a US ship that was trading otter pelt...which was in violation to Spain's blockade of foreign goods coming to the area. A short battle, the ship, the Leila Byrd, left when winds favored them and having suffered minor damage. By time of the Mexican War and the conquest of California, this 10-cannon fort, was abandoned. Until 1873, the fort was maintained by the US Navy, until modern shore batteries were constructed and it was renamed For Rosecrans. Then it became a nuclear submarine base in the 1960s. Now the fort and batteries are shut down. The Fort Guijarros Museum Foundation conducts archaeological digs and historical research into the history of Ballast Point. 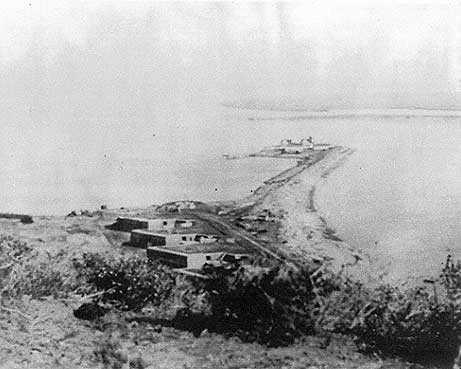 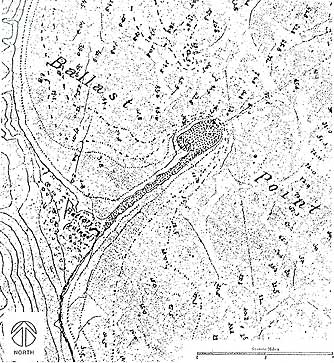 Artist's rendition of the fort upon completion 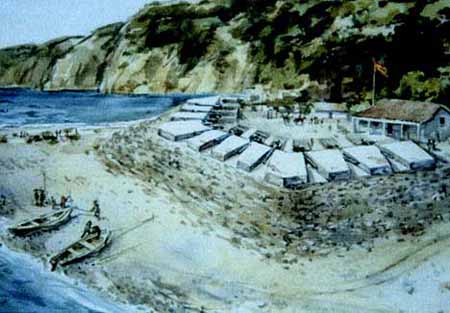 Historical marker for the fort on Ballast Point 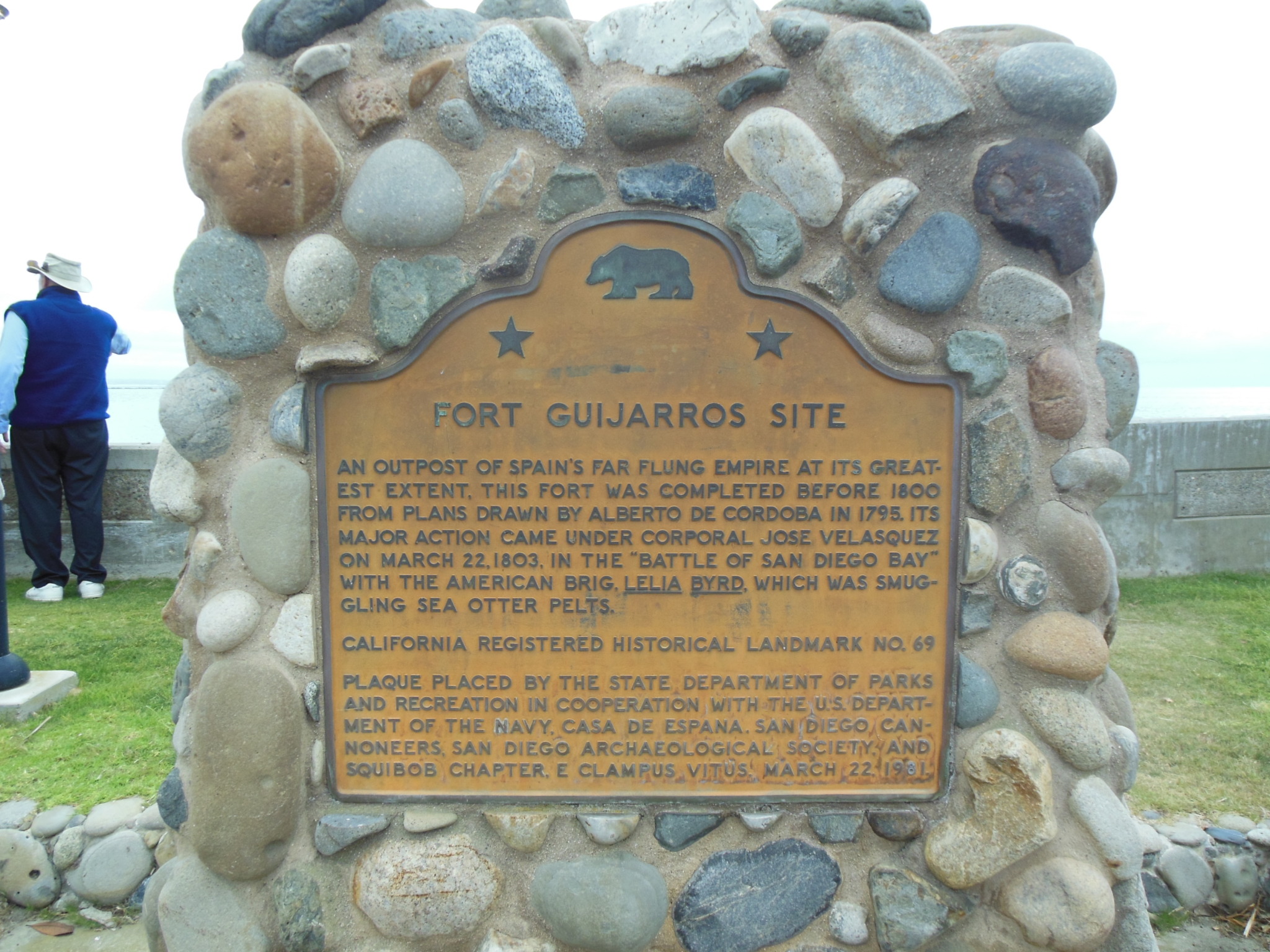 Artists's rendition of the Battle of San Diego Bay 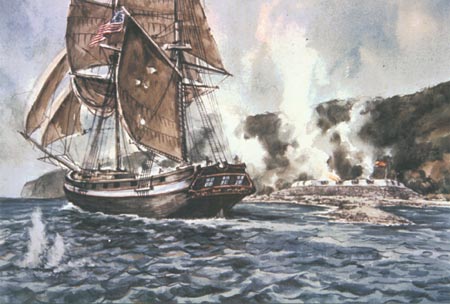 1911 photo of a troop inspection by Brigadier General T. H. Bliss of the 28th and 115th Companies, Coast Artillery Corps. 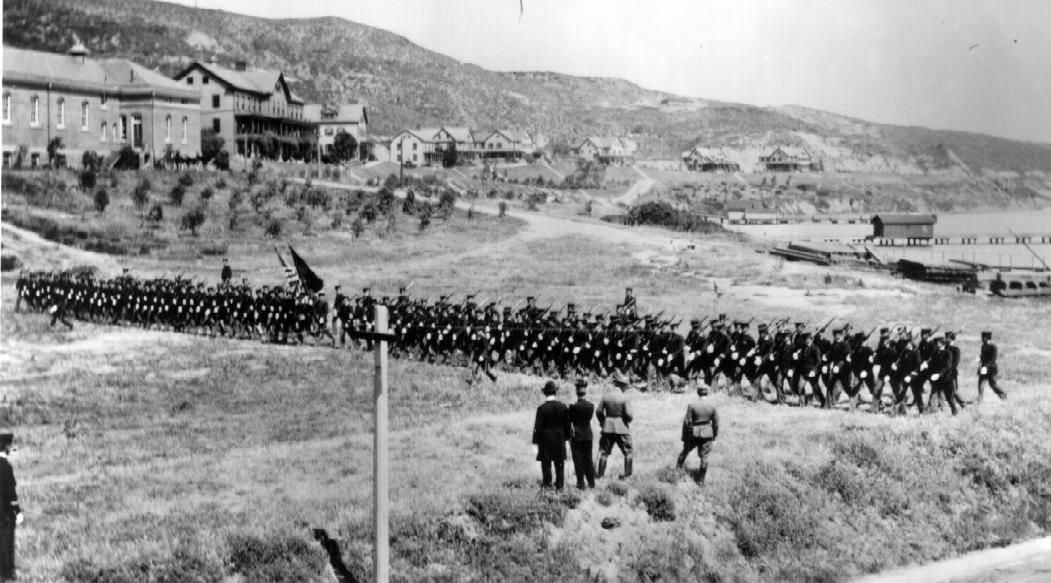 Members of the Royal Spanish Court, a Los Angeles group that re-enacts the Spanish history of California, attends the 212th anniversary of the Battle of San Diego Bay in 2015. Courtesy of the San Diego Union Tribune. 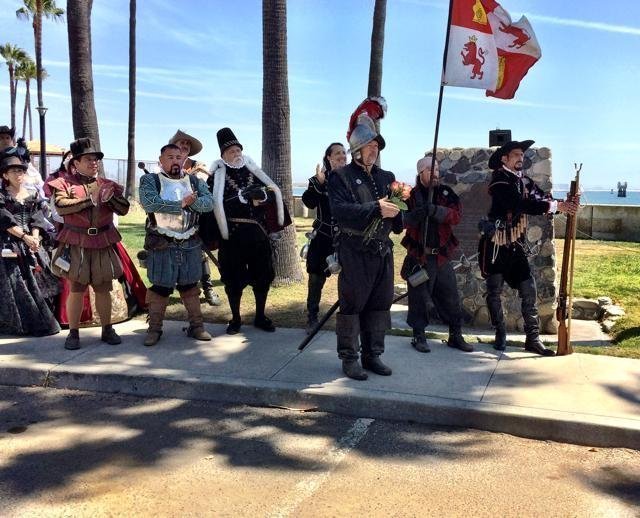 Although Spain had controlled the area of what is now San Diego decades ago, this colonial power did not start constructing defenses for the area until 1796. Fort Guijarros was finished in 1797 at this point, one of the first defensive constructions completed. It was a 10-cannon fort situated to protect both the point it was built on as well as the port of Sand Diego Bay. The fort was made of adobe.

In 1803, a United States trading vessel tried smuggling otter pelts to Spanish merchants, in violation to Spain's blockade of foreign goods. On March 22, the Leila Byrd, tried escaping from the bay's notorious "Smugglers Cove," when it was fired on by guns from the fort. As the Byrd waited for favorable winds to help in its escape, the Byrd fired back, but in the end this "battle" resulted in a few shots from each side, no deaths, and only taking under an hour to finish. The United States ship suffered slight damage. This would be the only action between Spain and America along the Pacific Coast.

In 1828, now under Mexican control, the fort fired on another American vessel with similar results. In 1846, American forces with Californio allies took control of San Diego and the fort; the fort having been long abandoned prior to San Diego's occupation. Until 1873, the fort was maintained with its original purpose until modern and larger shore batteries were constructed. Fort Guijarros and the new batteries were renamed Fort Rosencrans. The batteries were active throughout the Spanish-American War, WW1, and WW2. During the Cold War, the batteries and the point became a nuclear submarine base. In 1890 a lighthouse was constructed nearby and decommissioned in 1957.

Now the fort itself is decommissioned, with remnants seen today as part of the Cabrillo National Monument. The fort's two original (and remaining) cannons are found in Fort Stockton and San Diego's Old Town Plaza. the Fort Guijarros Museum Foundation conducts archaeological digs and historical research into the history of Ballast Point.