This schoolhouse opened in 1831 through the generosity of Elizabeth and Jesse Harvey, two Quakers who responded to the exclusion of African American children from the schools of the community by funding the construction of this school. The school was the first free school for African American children in Ohio. The school remained open until the early 1900s. The building was used as a private home for most of the 20th century. In 1976, the Harveysburg Bicentennial Committee acquired the building and restored it to the way it appeared as a school. The building is now the headquarters of the Harveysburg Community Historical Society which offers events throughout the year and hopes to operate the building as a community museum. 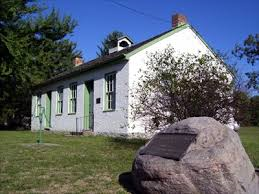 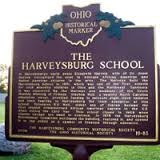 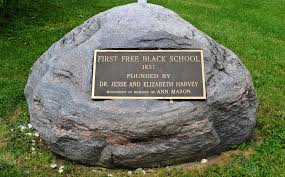 Established in 1831, this school relied on donations and educated Native American children along with African American children in the area. As reported in the history of Harveysburg, North Carolina plantation owner Stephen Wall paid to send eight of the children he had previously enslaved to Harveysburg, along with their mothers, so that the children would have an opportunity to attend the school. Wall also freed his own enslaved son, Orindatus S.B Wall, and provided funds so that his boy could attend the school. The son of an enslaved mother and a slave owner, S. B. Wall became the first African American to achieve the rank of captain and for his leadership in command of soldiers in the Civil War.

The building was used as a school for African American children until the early 1900s, although Ohio law barred racial segregation after the 1880s. The building was sold and privately held for most of the 20th century. In the 1970s efforts to build a community history and heritage center culminated with the acquisition of this building thanks to grants from the National Park Service and Ohio Historical Society.