The Monument of States was created by Dr. Charles Bressler-Pettis in 1942 shortly after the attack on Pearl Harbor. Bressler-Pettis was a past district governor of Lions Club International and a promoter of local tourism, and he saw this monument as a way to symbolize American unity during World War II. Dr. Bressler-Pettis wrote letters to every state governor asking them to send him rocks from their states. A year passed by and then the donations began to arrive from governors, a prime minister, the President of the United States and even tourists. The stones included small boulders, fossils, chunks of quartz, blocks of native granite, and parts of old buildings. President Franklin D. Roosevelt sent a rock from his Hyde Park estate, and so did Governor Rexford Guy Tugwell from Puerto Rico and Prime Minister MacKenzie King from Canada. There is also a piece of petrified wood from Arizona, a meteorite, a palm tree, a cannonball from Michigan, bottles, buffalo horns from Montana, a skull, a rock from the Sahara, glacier eggs, a petrified apple from Wisconsin, an etched outline of a map of the U.S., a buffalo, a map of Holland, a star for Texas and more. 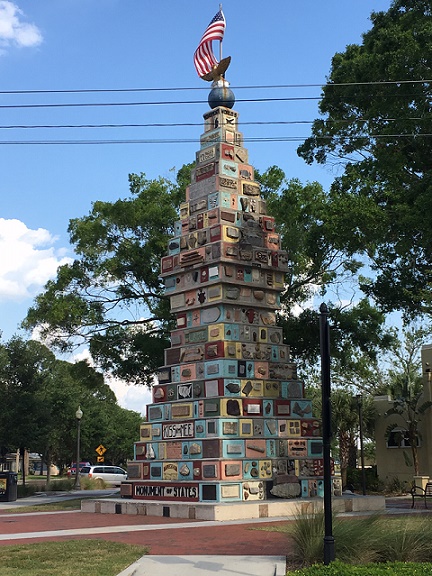 The idea for the monument came from Dr. Charles Bressler-Pettis in 1942 after the attack on Pearl Harbor. He was a past district governor of Lions Club International and a promoter of local tourism, who wanted to create a symbol of American unity during World War II. By 1943 the Dr. Bressler-Pettis had rocks from all of the then-lower-48 states. Alaska and Hawaii were not yet states yet when the monument was built.

The cornerstone of the monument was laid at the Kissimmee Lakefront Park with a patriotic speech given by Mayor Ellis F. Davis. Then, the rest of the rocks were mortared together into a 50-foot-tall pyramid shaped of colored concrete slabs. There are about twenty-two rows of stones cemented in concrete reinforced with steel rails that wrap around the monument. Each slab was also inscribed with the donor’s name and location; for example, “Harvard Medical School”, “Idaho, Chase A. Clark Gov. 1941-42,” “Wisconsin Dairy Land.” The top slab is inscribed with the word “unique”, which is a good description of the Monument of States. And, for the peak of the monument Dr. Bressler-Pettis sculpted the words “Tourist Paradise” beneath a three-foot concrete planet Earth topped by a 562-pound concrete bald eagle with a six-foot wingspan; all cast by Dr. Bressler-Pettis himself with the help of J. O. Fischer and artist Don Lancaster. At the very top of the monument, an American flag flies on a twenty-foot tall flag pole. Building the 50-foot monument took 102 bags of cement. The victory walk surrounding the monument is inscribed with the names of the 473 donors who each contributed a bag of cement for the total project including the walk-way. The completed project weighed 30 tons and was dedicated as Monument of States on March 28, 1943, with a speech given by Senator Claude Pepper.
Dr. Bressler-Pettis promoted it for tourism as “The World’s Most Unique Monument,” and at the time it most likely was.  He also included hundreds of rocks in the monument that he and his wife had collected on their vacations over the years. As a result, there are more than 1500 stones of various types on display on the faces of the pyramid. Due to this fact, some people have called the Monument of States a geologist’s dream.

Long after Dr. Bressler- Pettis passed away, the monument remained and continued to grow. The city of Kissimmee received more rocks for the monument and they were added to the surrounding walkways, from Alaska, Hawaii, big corporations, and 21 countries around the world; all wanting to show their unity with the United States. As a result, Monument of States was a big tourist attraction in the era before Disney World was built in Florida. Tourists flocked to the monument looking for their state and in some cases their country.

Eventually, public interest dwindled and the humidity took its toll on the monument that began to show its age. Following the September 11th attacks, and at the recommendation of Kissimmee resident Ms. Ronnie Makowitz, the Central Florida area Hampton Inns and AAA Auto South rallied local employees to volunteer to refurbish the monument. In addition, the Kissimmee’s Parks and Recreation Department received a grant for $10,000 to use toward the monument’s initial refurbishment along with ongoing maintenance. The completed project included a new flag and fresh coat of paint on some of the slabs; restoring the monument to its World-War II era appearance.

Sandler, Roberta. A brief guide to Florida’s monuments and memorials.  2008

Hetherington, Alma. “The River Of The Long Water.” The Mickler House Publishers. 1980