The Crescent Bend property has a lovely, historic home located on the Tennessee River in an area known as Sequoyah Hills. Many visitors will step back in time when they come to visit the historic house and gardens. Guests can even plan events such as weddings, rehearsals, birthdays and more at this beautiful property. In 1832, Drury Armstrong purchased this land with the intent of establishing a farm. The Armstrongs were able to move into their newly-constructed home on October 7th, 1834. He named the farm "Crescent Bend," a reference to the bend of the Tennessee River at this location. 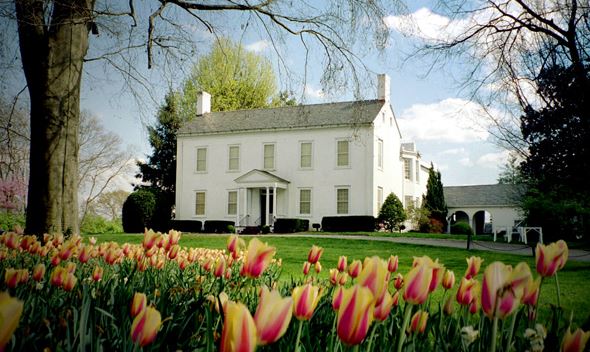 The Roman Fountain Terrace on the property. 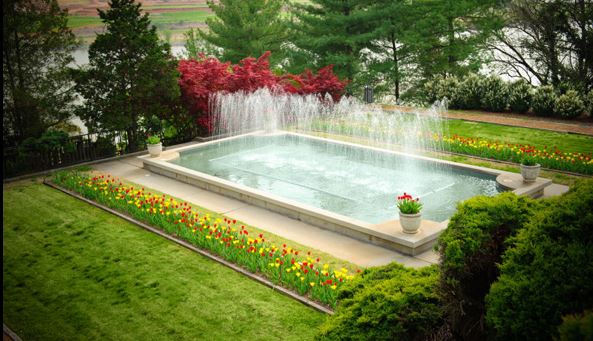 Sign located in front of the Crescent Bend property.

Map of where the Battle of Armstrong's Hill took place. 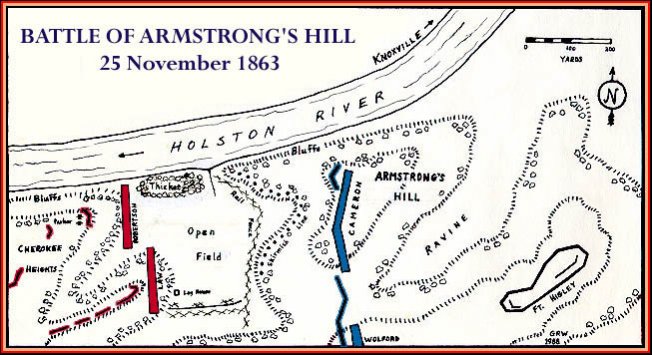 Originally, Crescent Bend started out with 600 acres before Drury Armstrong acquired another 300 acres on the South side of the Tennessee River. He owned many tracts of land including one in where the Battle of Armstrong’s Hill took place on November 25, 1863. This small skirmish saw a clash between the Confederate and Union forces that was part of the larger Union siege of Knoxville.

Drury Armstrong served as a register of the East Tennessee Land Office, a director of the Union Bank, as well as a United States assignee of bankruptcy. The Crescent Bend farm was divided among Drury’s two sons Marcellus Armstrong and Robert Armstrong. When Drury Armstrong passed away in 1856, Marcellus and his wife moved to Crescent Bend while Robert built their house on the property known as the Bleak House.

During civil war times, the house was used as a command center and hospital for both Union and Confederate armies. The Union army then controlled Crescent Bend and built a fortification around the house that gave them a commanding view of the river and area leading into town. Union General William P. Sanders was killed on Crescent Bend farmlands during 1863. In honor of Sanders, the Union Army decided to change the name of their main fortress from Fort Loudon to Fort Sanders. Crescent Bend was also known as being a safe house during the Underground Railroad era. Armstrong family descendants have said that the hidden trapdoor behind the main staircase in the house led to a room where slaves were sheltered.

In 1898 Jerome Templeton became the owner of Crescent Bend and remodeled the home into an exclusive Victorian-era home. Percy Lockett and his family bought the house in the early 1920s after part of the house caught fire and attempted to restore the house to its original structure. Philip Bonsal inherited the house after both of the Locketts passed away. By 1974 the house was divided into student apartments by the University of Tennessee. The house was almost demolished to make room for a 26-story student housing building. Luckily, Kingston Pike was declared a scenic highway where no structures over 2-stories could be built. Later the Toms Foundation got the opportunity to buy and restore the home. The restoration was finally completed in July of 1977 and has been open to the public ever since.