An artist's depiction of the brutal close quarters fighting. 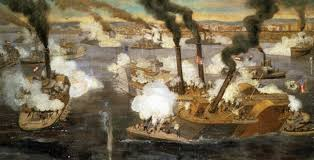 Listing ship in the Battle of Memphis 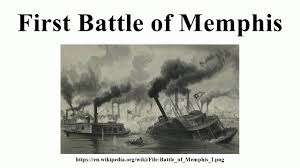 Map showing locations of sunken ships during the Battle of Memphis 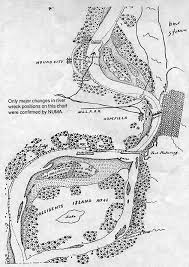 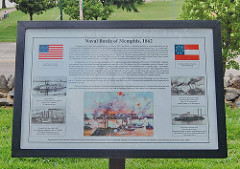 The Confederates had defeated the Union fleet at Fort Pillow on May 10th and were rather overconfident in their ability to defeat this new threat at Memphis.  A major problem facing the Confederates, however, was that civilians captained their ships and these men lacked military experience. Also, the gun crews were Army personnel who only answered to their commanding officers.  This led to disruptions in the chain of command which played a role in the inability of the Confederates to hold their ground. The Union chain of command fared little better in the ensuing chaos, but their superior force led to victory.

The opening salvos began at 5:30 am as the Confederate forces formed a battle line against the oncoming Union fleet.  After a mere fifteen minutes of exchanged gunfire, Ellet pressed through the Union Ironclads and attacked the Confederate fleet. In just under two hours the Union forces had sunk three Confederate ships and captured four others while losing only one ship.  The General Van Dorn was the only Confederate ship to escape the battle.