Wetmore and Ochre Court Stables, today known as Antone Academic Center on the campus of Salve Regina University, were constructed in the mid-nineteenth century by Seth Bradford and Richard Morris Hunt, respectively. The two stables, purchased by the university in the 1960s, originally served at the stables and carriage house for the famous mansions Chateau-sur-Mer (Wetmore) and Ochre Court (Ochre). The architectural style of the building encompasses a variety of different elements, including a mansard roof, gable dormers, Belgian block, and Herringbone brick floor patterns, and cast iron embellishments. The restored buildings, now connected to one another, still retain many of the qualities of the original stables, including wide arched doorways and the brick design in the flooring that allowed for drainage. The stables were renovated by Salve Regina University in 2010, after having served as athletics storage for several years. The buildings were connected to create Antone Academic Center, named after Sister Mary Therese Antone, the previous president of the university. 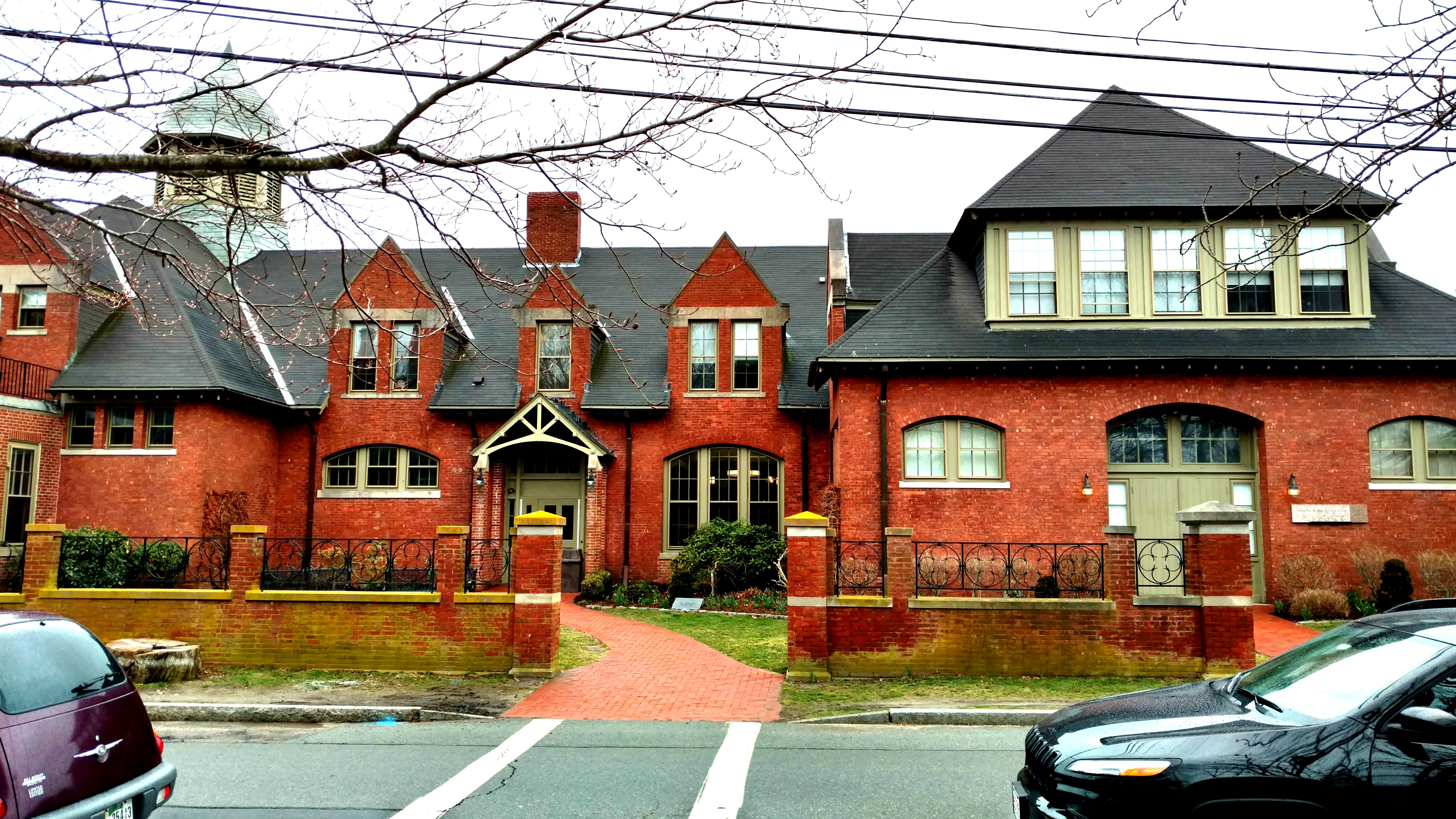 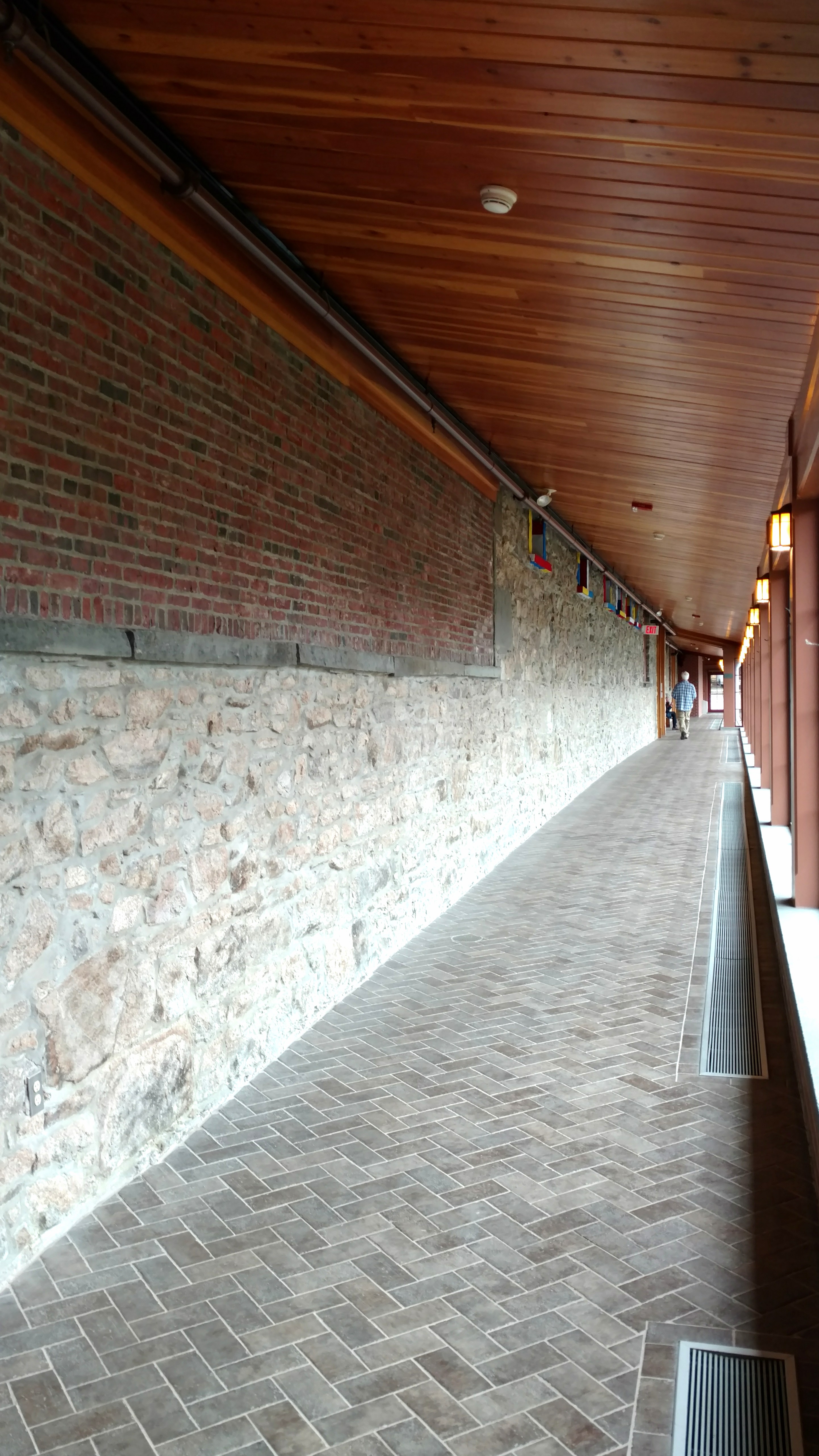 New windows looking out into the tennis courts. This serves as the connector between the Wetmore and Ochre Court structures. Photo taken by Ellen Tuttle. 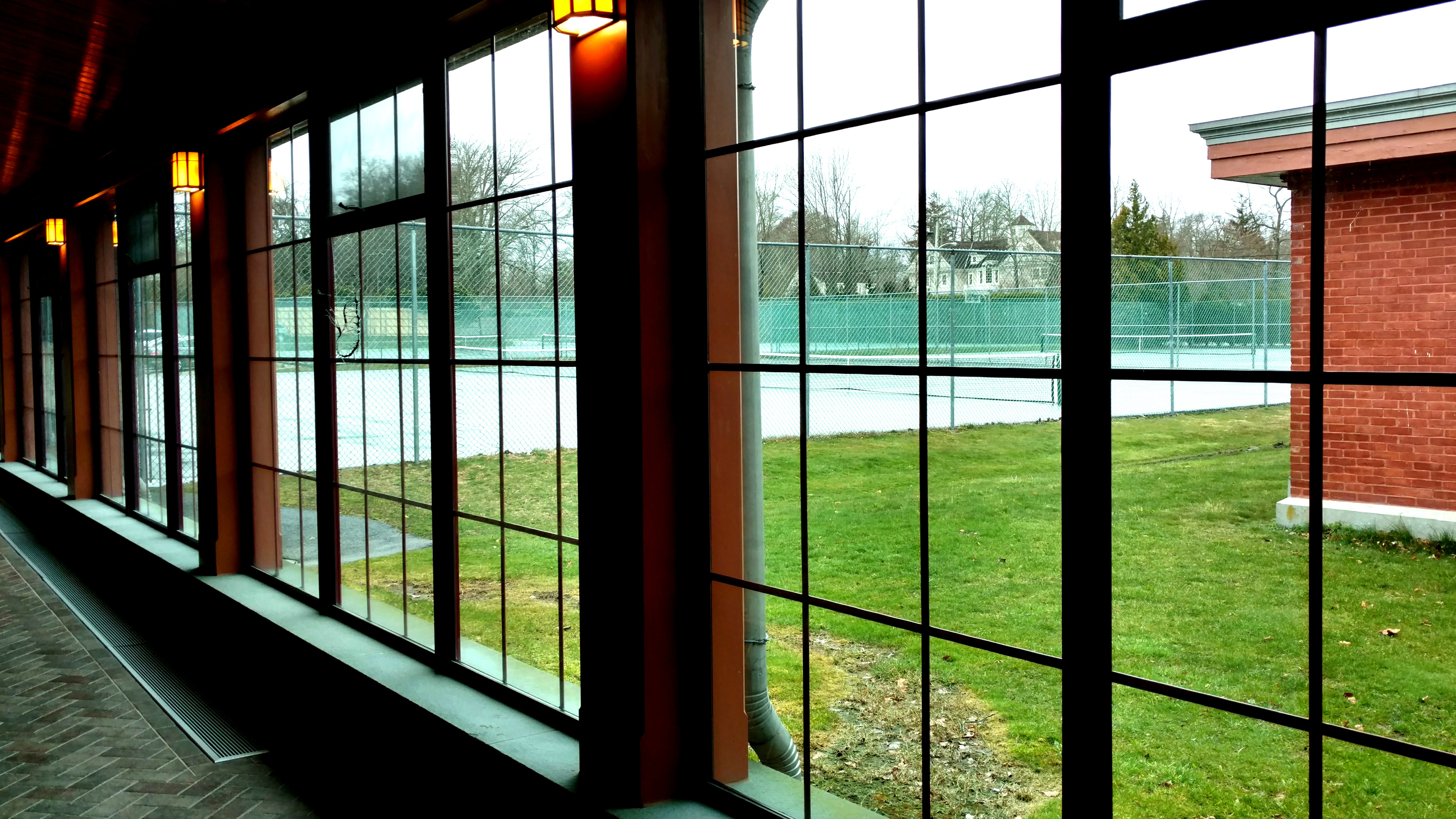 Windows built into the stonework of the hallway: possibly served as original windows on the exterior of the stables at one point. Photo taken by Ellen Tuttle. 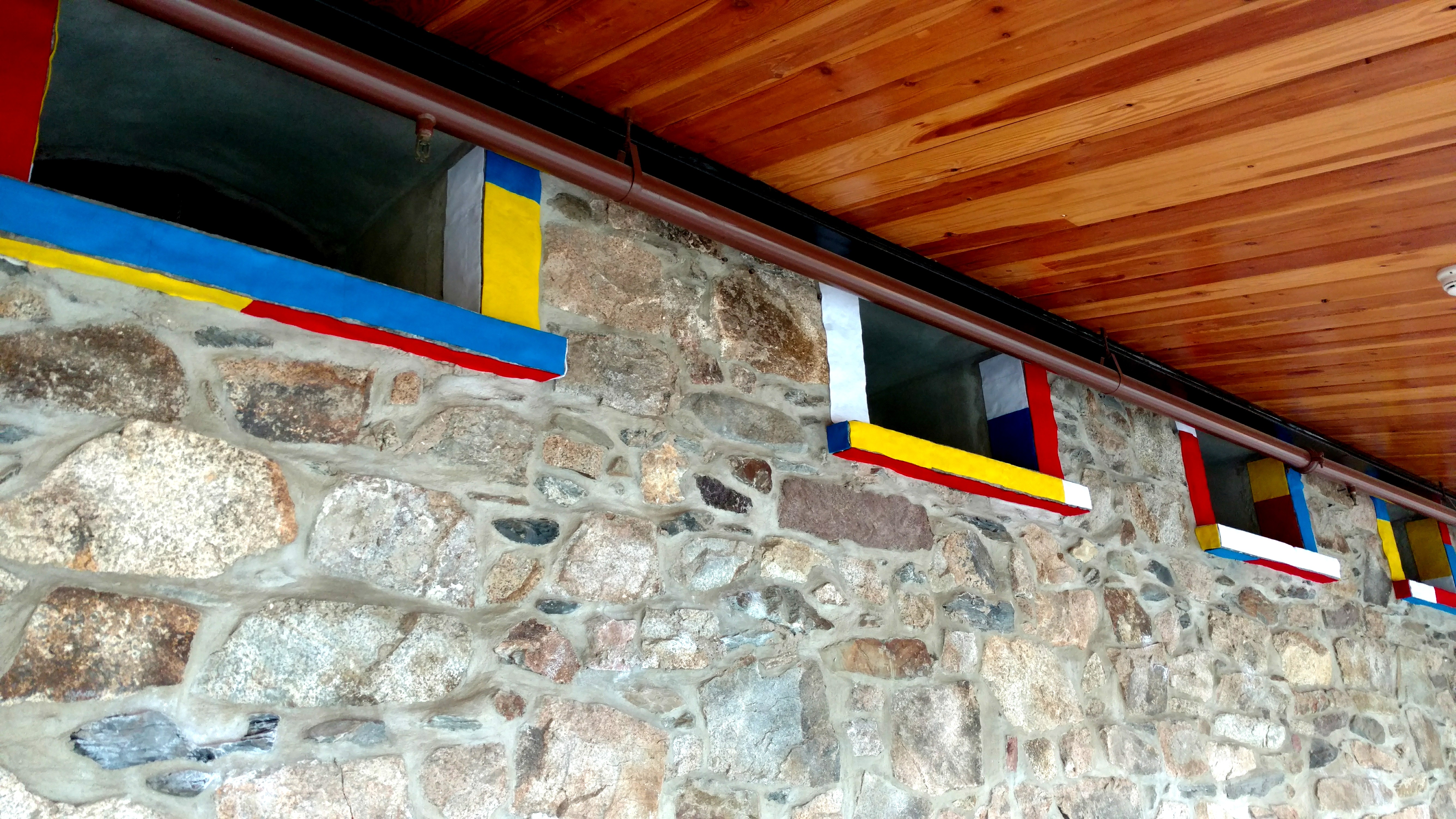 Visible examples of the wide, arched doorways of the stables. Along the walls are the distinctive yellow and red brick, and the drain-design of the floor can be more easily viewed on this scale. Photo taken by Ellen Tuttle. 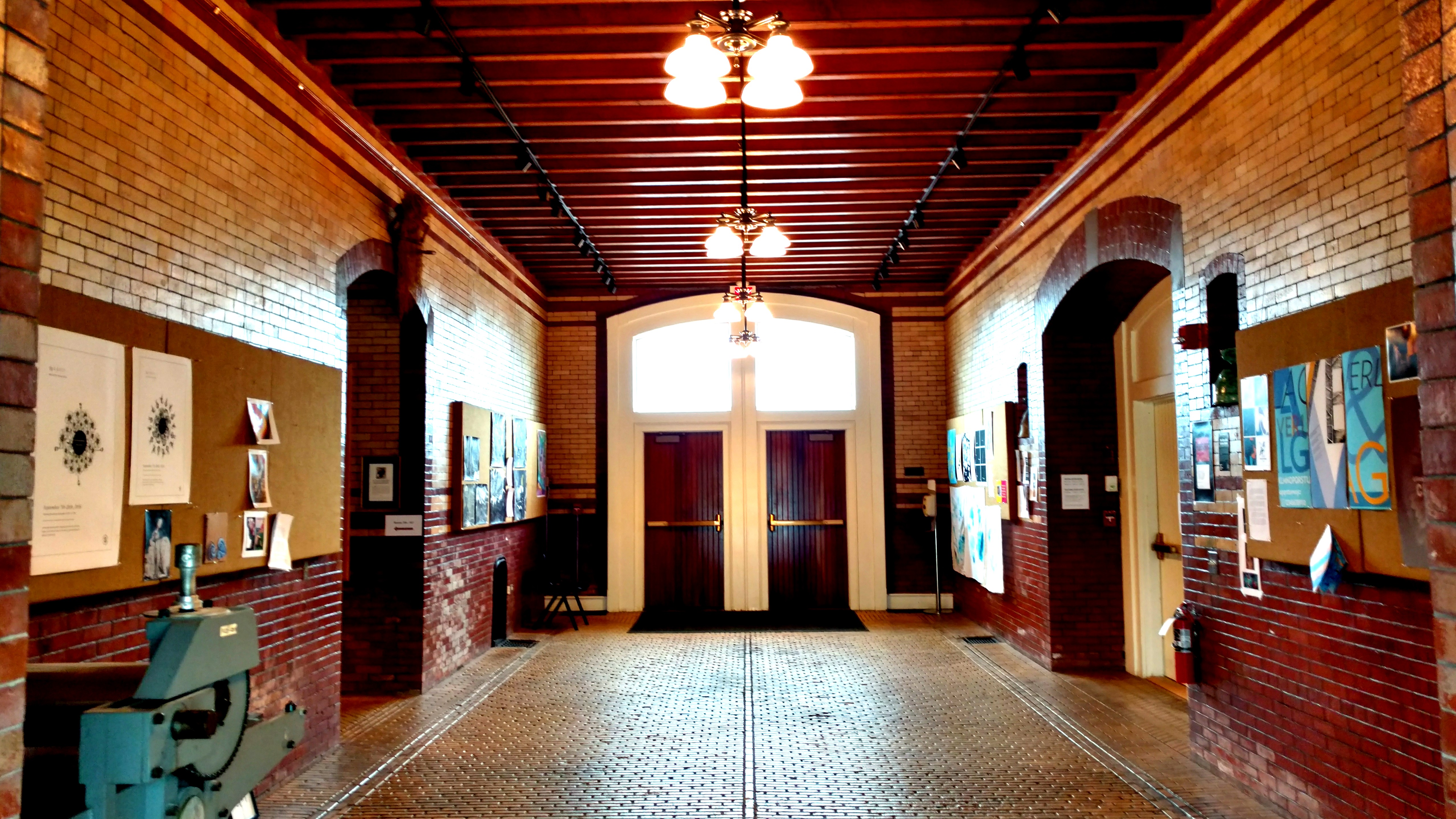 An example of the brick arrangement in the floors of the stables: channels were constructed by the bricks which led to drains. Photo taken by Ellen Tuttle 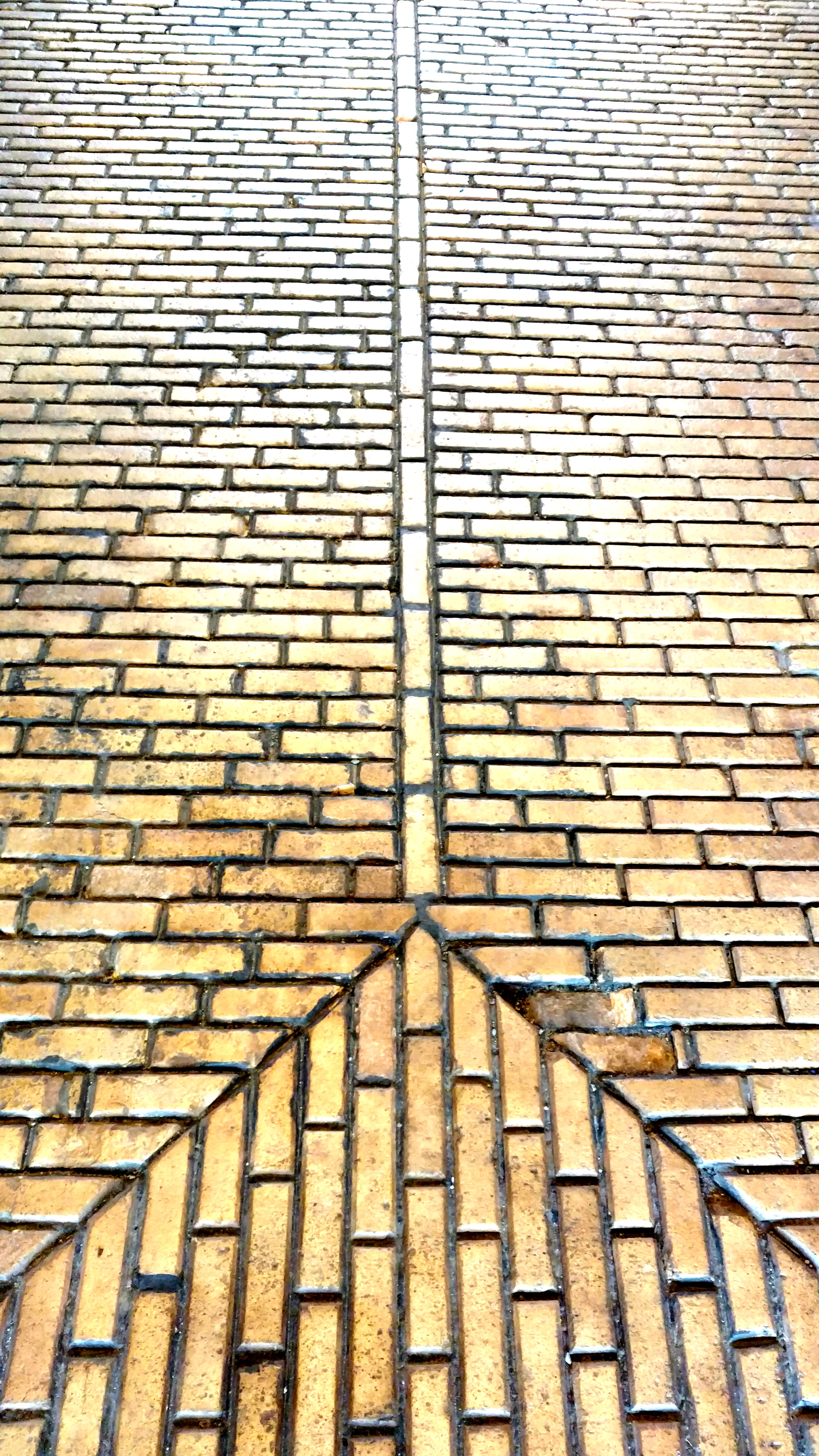 Another example of the wide-arched doorways of the stables. Photo taken by Ellen Tuttle near DiStefano Lecture Hall in Antone Academic Center. 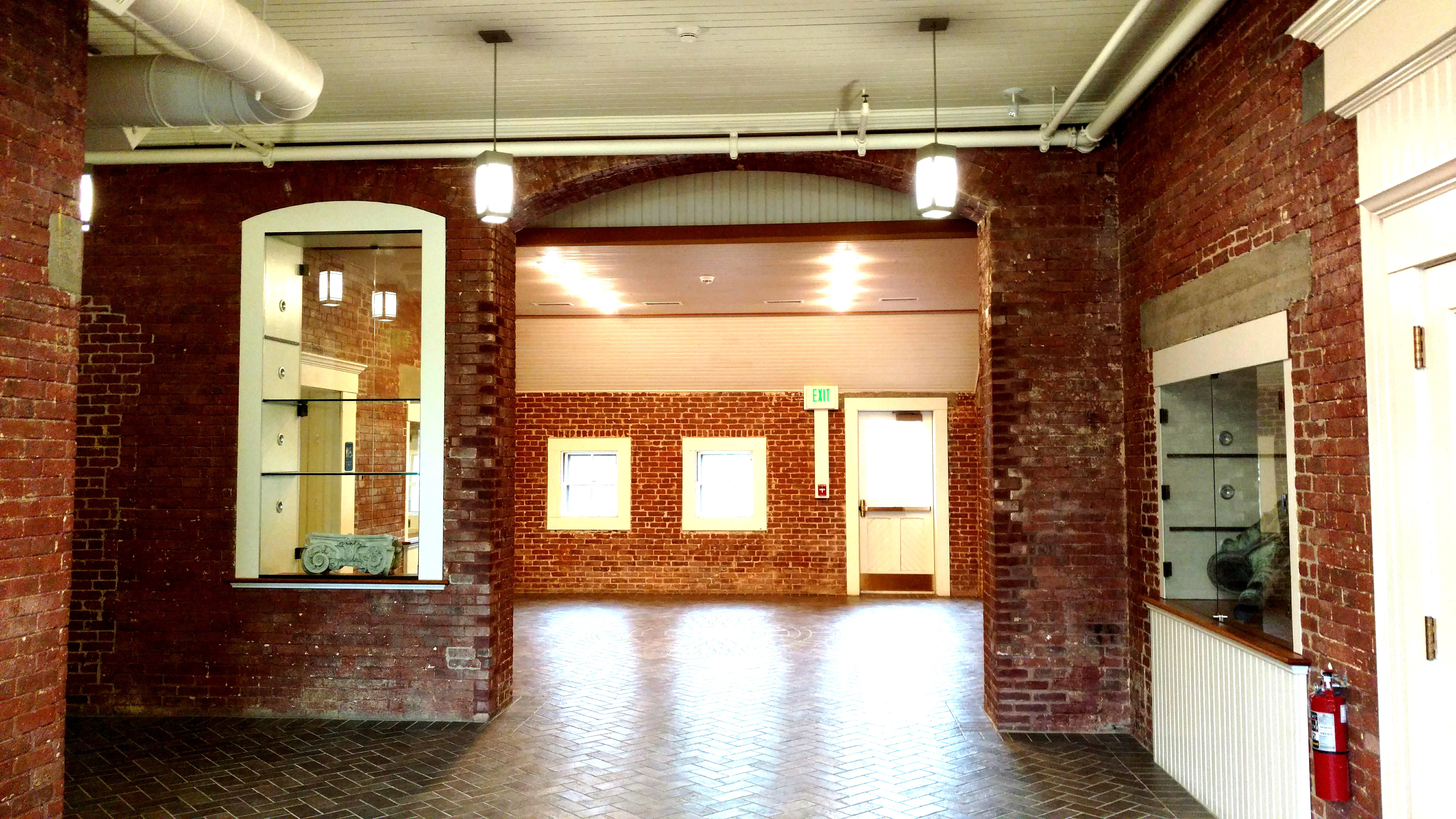 Wetmore Stables were constructed as part of the Chateau-sur-Mer estate in 1853 by architect Seth Bradford. The estate and the stables were built for the aristocratic Wetmore family, who were merchants by trade. The Italianate-style mansion, abutting Bellevue Avenue, is one of the pinnacle mansions of the Gilded Age era in Newport. The stables were constructed farther from Bellevue, sitting on the corners of Leroy and Lawrence avenues. Mercy Hall, an 1889 Queen Anne carriage-style house, which today constitutes the northern section of Antone Academic Center, served as the carriage house for the Wetmore family. Mercy Hall was constructed by Richard Morris Hunt, who expanded Chateau-sur-Mer in the 1870s and assisted George Champlin Mason in the additions to the Wetmore Stables. The Wetmores commissioned extensive additions, including the additional 84 linear feet and 14 stalls that Hunt and Mason added to the stables. Additions would be made for the next thirty years, including the distinctive yellow and red brick stall linings and the Belgian block floor design that still exists today. A series of fixtures windmill once stood at the top of the stables to prevent hayloft fires and a roof drainage system which channeled water directly into the horse troughs, have since been removed or redirected.

Ochre Court, like Chateau-sur-Mer, is another one of the paramount structures of Newport’s Gilded Age, standing as the second largest, next to the Breakers. Built in 1892 as a summer home for New York banker Ogden Goelet, Ochre Court’s extravagant architectural structure and details are well-known today throughout the city. Ochre Court stables were constructed near Wetmore stables at the intersection of Leroy and Lawrence avenues.

Wetmore Stables were purchased by Salve Regina University (then known as Salve Regina College) in the 1960s, whereas the Ochre Point Stables were gifted to the institution in 1947. The university originally utilized the buildings as facilities management and athletics storage. The overall integrity of the buildings took a hit when additions were made, including HVAC ducts, wallboard partitions, dropped ceilings, and an asphalt coating on top of the slate roof.

In 2010, the facilities and athletics departments moved out of the buildings, and architectural firm Mesick Cohen Baker Wilson and contractors Farrar & Associates were called in to help restore the buildings in addition to connecting them to create one structure, which was partly funded by a $202,000 Getty Grant. The renovations included the following: the reconstruction of chimneys, repair of Minton tiles and gabled dormers (in addition to adding three more near the graphic arts studio), repointing of masonry walls and Belgian blocks, leveling of the stalls’ brick floors, exposition of joists, replacement and restoration of original wooden windows, zinc flashing edging added along the roofline, addition of copper gutters, replication of original cornices and cupolas, patching and re-varnishing of the beaded board, and, finally, the replacement of the roof with a unique purple slate.

Today, the structures of Wetmore and Ochre Court stables comprise the Antone Academic Center at Salve Regina University. The center is the home of the Cultural and Historic Preservation department, in addition to the art, music, theatre, and dance programs. Although a significant amount of reconstruction and restoration has been done to the historic buildings, the overall originality of the structures remains very much alive. When walking into Antone, one truly feels as though they are in an effectively preserved historic structure — that is, when walking into Antone Academic Center, so much of the originality of the structure still remains that its original purpose is both obvious and well-preserved. In the Cultural and Historic Preservation lab, the Belgian blocks still constitute the floor, the red and yellow bricks still line the walls, and the wide stable-like doorframe, although replicated, remains. The stables, although having been reconstructed, replicated, reconstituted, and renovated, can still be recognized as stables, and while the legacy of the Wetmores and Goelets may not be recognized frequently by Salve students or residents of Newport, familiarity and appreciation of Antone resound throughout campus.