This memorial park commemorates local residents who served in the Korean War (1950-1953) and was made possible by members of VFW Post 149. The memorial includes a M41 tank as well as a small marker dedicated to veterans of the Korean War. One of the leading conflicts that involved US troops during the early years of the Cold War, the Korean War lasted three years and saw United States military intervention to push back a pro-Communist invasion of South Korea. The Korean War is sometimes referred to as the “forgotten war” because it was overshadowed by the Vietnam War which occurred shortly after. The tank on display was used in the Korean War. 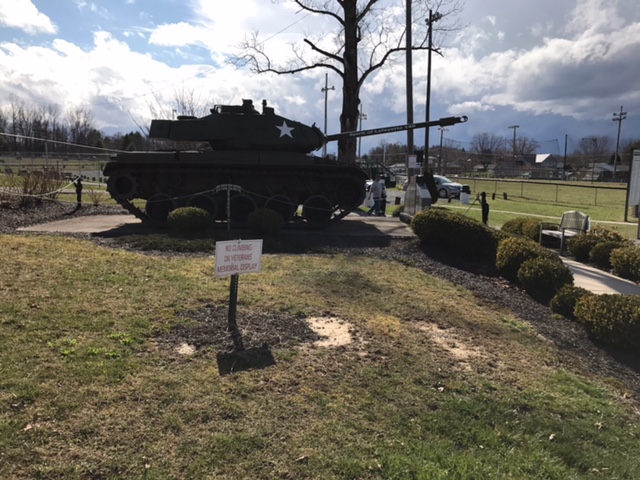 Image of commemorative plaque placed in front of the monument. 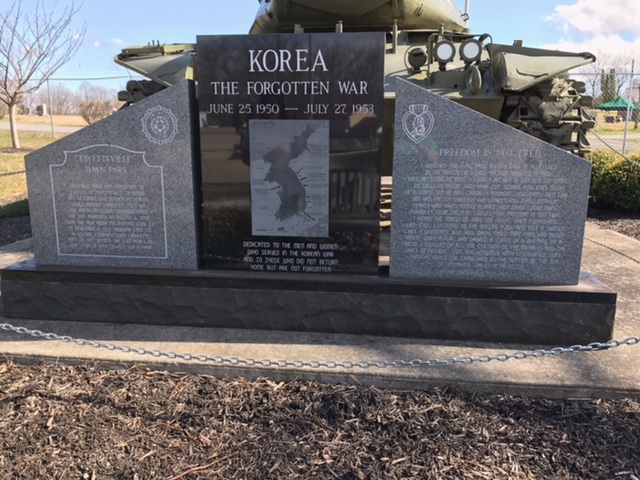 From 1910 to the end of World War II, Japan controlled the Korean Peninsula. Following the surrender of Japan at the end of World War II, the country was split with the northern half under the control of a pro-communist government and a southern half controlled by a pro-American government. The war began when soldiers from North Korea crossed the boundary of the 38th Parallel into South Korea, and the United States came to their aid. As UN forces pushed North Korean forces back across the 38th Parallel and into North Korean territory, they met a large Chinese force at the Yalu River. After a long retreat, a defensive perimeter was established at the 38th Parallel where a stalemate ensued for an extended period as both sides continued with small battles along the border. Peace talks were delayed due to the lack of a clear agreement of how prisoners of war would be exchanged, but eventually, a ceasefire was established in 1953.

The Korean War is sometimes denoted as the “forgotten war” even though there is still tension in the area. It is not because there was little American involvement (almost 2 million Americans served), but because after the war had begun it was not as publicized as World War II. There wasn’t war rationing like during World War II, and after the war effort met Chinese resistance and later a stalemate, many Americans turned away from reports of the war. All of these reasons lend themselves to the fact that the Korean War was not a priority in the average American's life. Another reason for the population's disconnect from the war is that shortly after the Korean War, the United States became involved with combatting Communist aggression in Vietnam. Support for the Korean War began strong but dwindled as the conflict extended, similar to what was observed toward the end of the Vietnam War.

The monument is composed of the M41 tank which was developed to replace the outdated World War II M24 Chaffee tank. With improvements in technology, the M41 was developed as a light tank with increased firepower and speed due to its larger main gun and more powerful engine. Production of the tank began in 1947, and the first batch was produced in 1952, being shipped to Korea by 1953. Some issues were encountered later since the vehicle was not amphibious, or NBC capable and was too heavy for air delivery but was later corrected by an aluminum alloy hull making the tank lighter and faster. Arriving late into the conflict, the M41 tank saw its major theater of action in Vietnam.