Located at the West Virginia Welcome/Tourist Information Center on Interstate 64 Eastbound, near Huntington, this marker denotes one of many Blue Star Memorial Highways which honor the United States Armed Forces. This marker was dedicated in 1988 by the Ohio-Guyan District of West Virginia Garden Club in cooperation with the West Virginia Department of Highways. From the parking lot, the marker is located to the left of the West Virginia Welcome Center (in front of the restroom building) in a landscaped area designed to both pay tribute to the Armed Forces and beautify the area. National Garden Clubs, Inc. directs the Blue Star Memorial Program which dates back to 1946.

Close up of the Blue Star Memorial Highway marker located at the West Virginia Welcome Center (I-64 Eastbound), which includes the tribute to the Armed Forces as well as the sponsors of this marker. 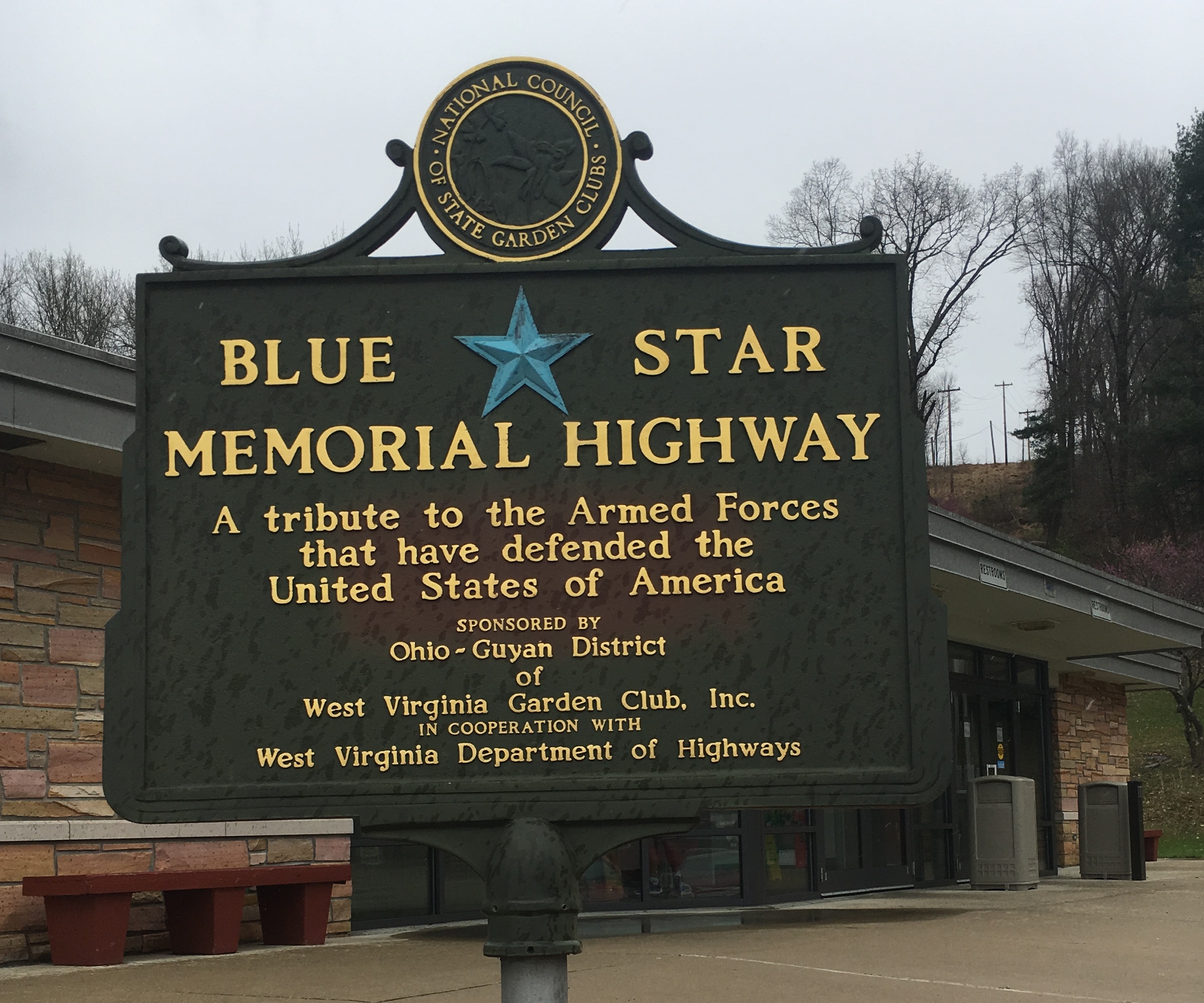 This perspective shows the marker, which is in front of the restrooms on the left, the West Virginia Welcome Center in the middle next to the flag pole, and in the distance to the right is a vending machine building and the Airborne Memorial. 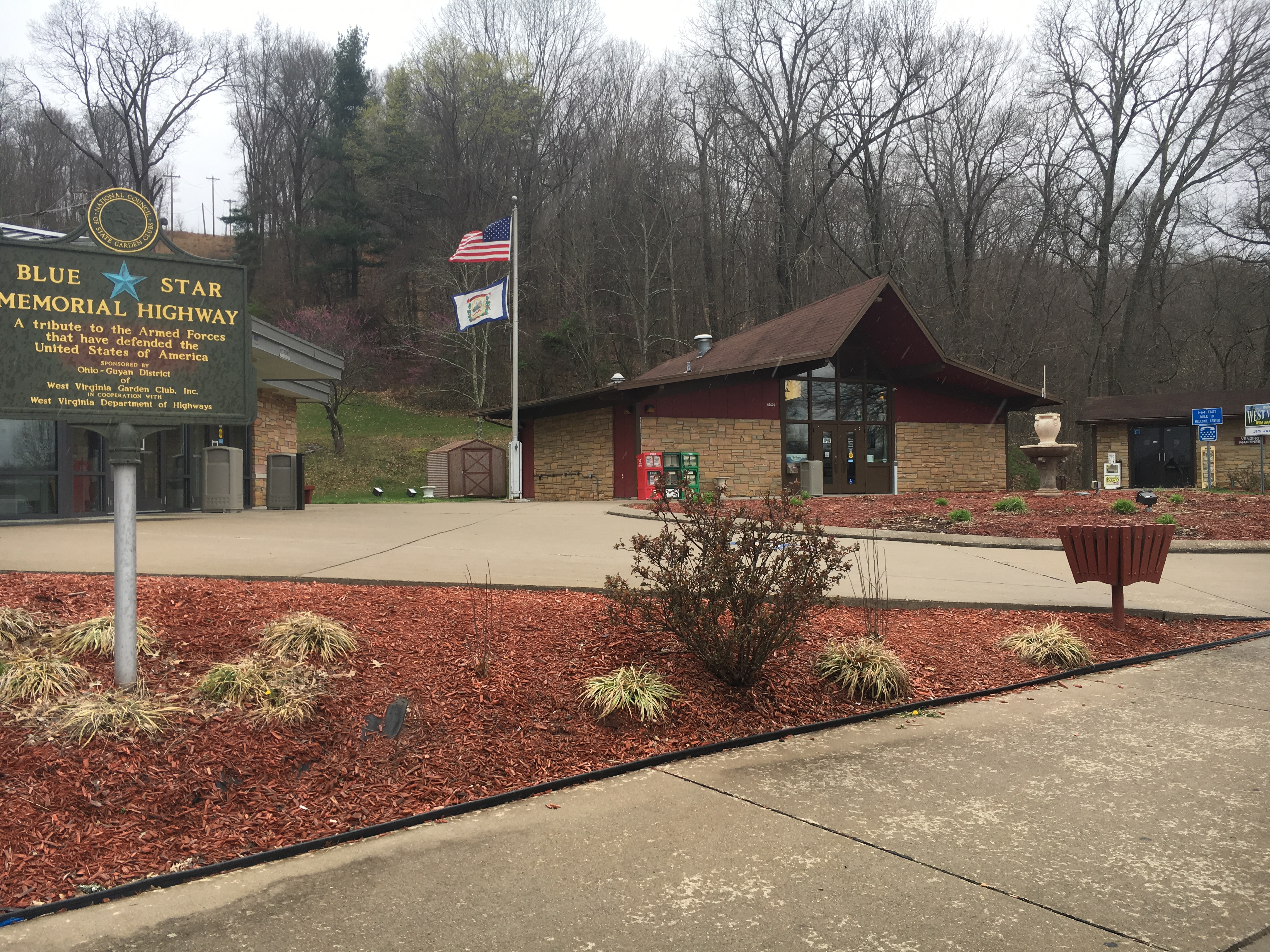 To the right of the West Virginia Welcome Center (opposite of the Blue Star Memorial Highway marker) is the Welcome to West Virginia Airborne Memorial. The building behind it (in the picture) is the vending machines building. 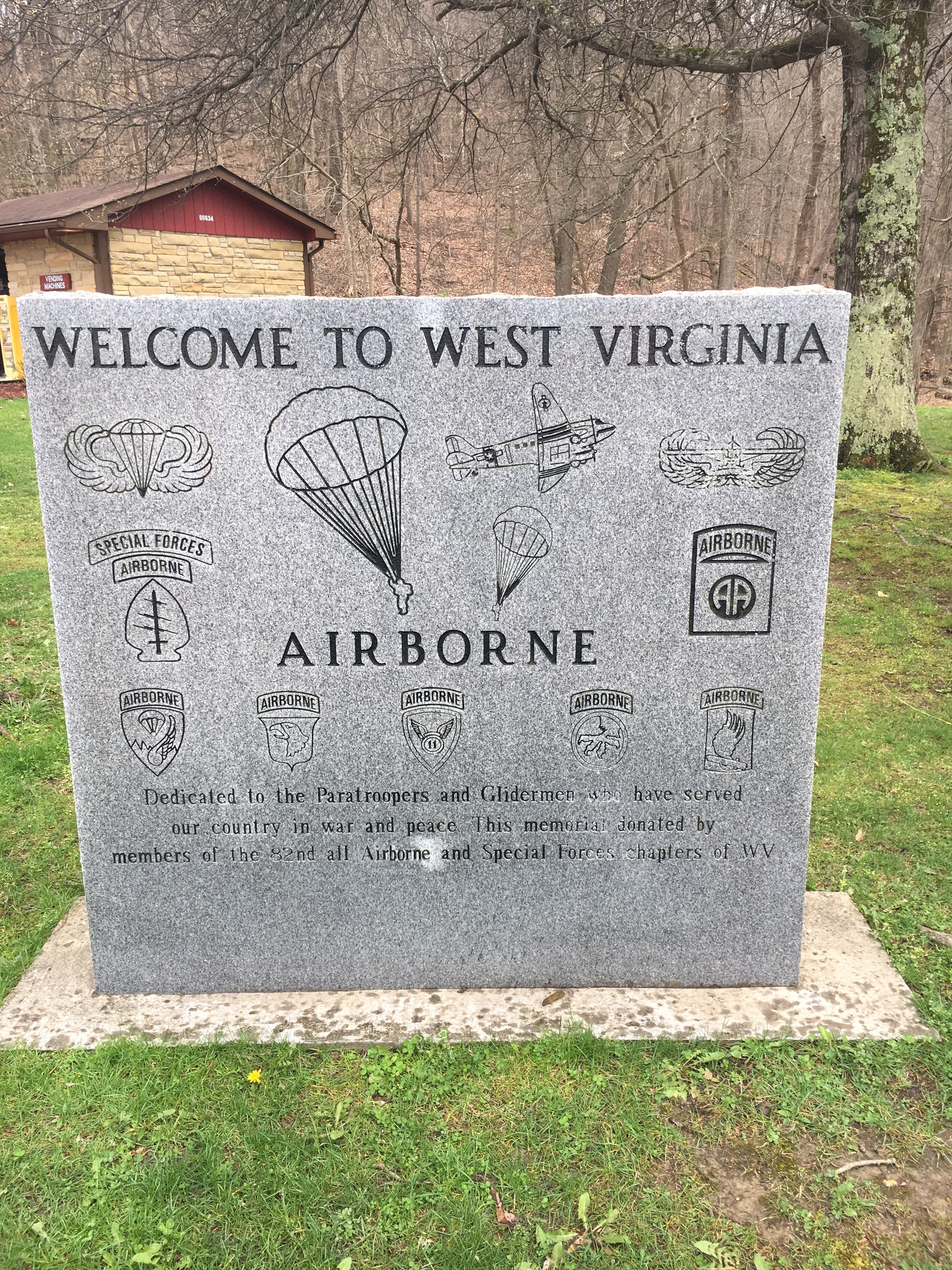 Towards the end of World War II, members of the National Council of State Garden Clubs (now known as National Garden Clubs) discussed ways that they might honor service members beyond the traditional monuments made of stone. In 1944, the Garden Club of New Jersey President, Mrs. Lewis M. Hull, and Roadside Chairman, Mrs. Vance Hood, envisioned a way to honor service members that would simultaneously honor and beautify the land by creating "living memorials".
This simple idea spawned the group's first project as the New Jersey Council of Garden Clubs planted 8,000 Dogwood trees along the Blue Star Drive. The designation of the highway, as well as the flowers planted along the route, honored New Jersey residents who served in the Armed Forces.
New Jersey's State Highway Commissioner, Spencer Miller, worked on the New Jersey project, and as guest speaker at the 1945 National Council of State Garden Clubs Annual Meeting in New York City, "he proposed that the program be adopted by NCSGC."2 The project was approved at the 1945 Fall Semi-Annual Meeting, "a 'ribbon of living memorial plantings traversing every state' called the Blue Star Memorial Highway Program was adopted at the 1946 Annual Meeting in New Orleans", and in 1947, the Blue Star Memorial Highway Marker was designed by Mrs. Frederick R. Kellogg.2
The idea excited garden clubs throughout the United States and Rhode Island became the first state to receive the endorsement. Participants work to provide landscaping along the sides of designated highways and erect markers with official approval from their organization and the state highway departments. By 1951, the program expanded beyond World War II and honored all members of the U.S. Armed Forces.
The official Blue Star markers have changed over time. A smaller marker was approved in 1981 in order for markers to be placed in locations other than along highways (at historical sites and parks, for example). In 1994, the marker was changed again to include a tribute to the Armed Forces. In 1996, a third marker was added that mirrored the original marker with the exception of the word "Highway", which was removed from the third marker in order to make the memorial broader--this allows for it to be placed at locations such as a National Cemetery or a VA Center. Yet again, the purview of the marker was broadened in 2004 to include further appropriate locations.

The "Blue Star" name stems from the Blue Star that is on the Service Flag. The Blue Star is symbolic of hope and pride, and banners with Blue Stars were given to family members of active soldiers during World War II. Families who lost a service member in combat were given banners with gold stars. Similar to the Blue Star Program, Congressional Medal of Honor recipient Woody Williams is working to create monuments and memorials to Gold Star families throughout the United States.