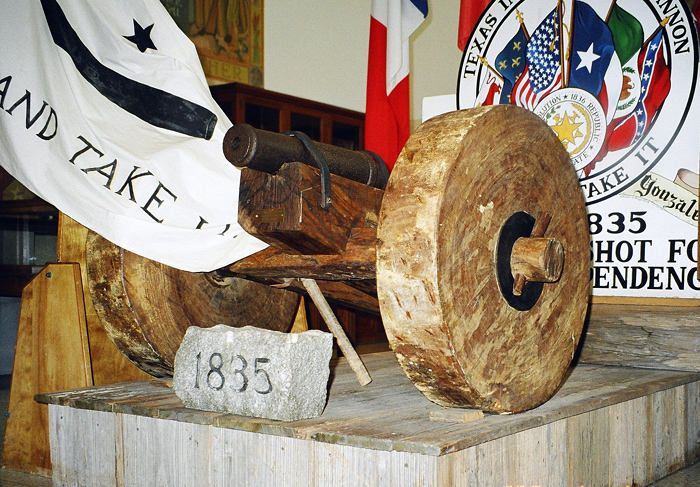 The "Come and Take it!" flag flown in the battle of Gonzales 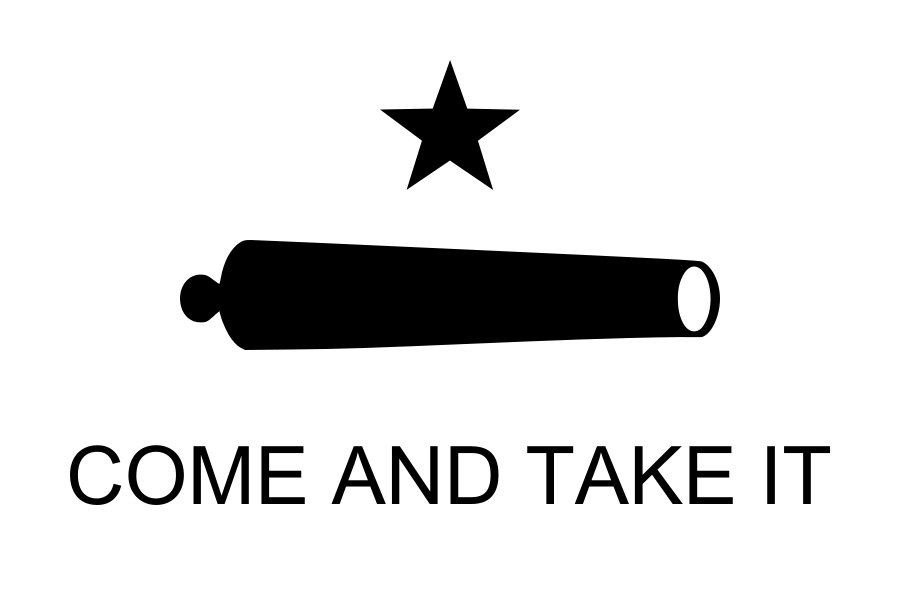 In 1831, Mexican authorities gave the settlers of Gonzales a small cannon to help protect them from frequent Comanche raids. Over the next four years, the political situation in Mexico deteriorated, and in 1835 several states revolted. As the unrest spread, Colonel Domingo de Ugartechea, the commander of all Mexican troops in Texas, felt it unwise to leave the residents of Gonzales with a weapon and requested the return of the cannon. When the initial request was refused, Ugartechea sent 100 dragoons to retrieve the cannon. The soldiers neared Gonzales on September 29, but the colonists used a variety of excuses to keep them from the town, while secretly sending messengers to request assistance from nearby communities. Within two days, up to 140 Texians gathered in Gonzales, all determined not to give up the cannon. On October 1, settlers voted to initiate a fight. Mexican soldiers opened fire as Texians approached their camp in the early hours of October 2. After several hours of desultory firing, the Mexican soldiers withdrew. Although the skirmish had little military significance, it marked a clear break between the colonists and the Mexican government and is considered to have been the start of the Texas Revolution. News of the skirmish spread throughout the United States, where it was often referred to as the "Lexington of Texas". The cannon's fate is disputed. It may have been buried and rediscovered in 1936, or it may have been seized by Mexican troops after the Battle of the Alamo.

The Mexican Constitution of 1824 liberalized the country's immigration policies, allowing foreigners to settle in border regions such as Mexican Texas. In 1825, American Green DeWitt received permission to settle 400 families in Texas near the confluence of the San Marcos and Guadalupe Rivers. The DeWitt Colony quickly became a favorite raiding target of local Karankawa, Tonkawa, and Comanche tribes, and in July 1826 they destroyed the capital city, Gonzales. The town was rebuilt the following year, after DeWitt negotiated peace treaties with the Karankawa and Tonkawa. The Comanche continued to stage periodic raids of the settlement over the next few years. Unable to spare military troops to protect the town, in 1831 the region's political chief instead sent the settlers of Gonzales a six-pounder cannon, described by historian Timothy Todish as "a small bored gun, good for little more than starting horse races".

During the 1830s, the Mexican government wavered between federalist and centralist policies. As the pendulum swung sharply towards centralism in 1835, several Mexican states revolted. In June, a small group of settlers in Texas used the political unrest as an excuse to rebel against customs duties, in an incident known as the Anahuac Disturbances. The federal government responded by sending more troops to Texas. Public opinion was sharply divided. Some communities supported the rebellion for a variety of reasons. Others, including Gonzales, declared their loyalty to Mexican President Antonio López de Santa Anna's centralist government. Local leaders began calling for a Consultation to determine whether a majority of settlers favored independence, a return to federalism, or the status quo. Although some leaders worried that Mexican officials would see this type of gathering as a step toward revolution, by the end of August most communities had agreed to send delegates to the Consultation, scheduled for October 15. In the interim, many communities formed militias to protect themselves from a potential attack by military forces.

On September 10, a Mexican soldier bludgeoned a Gonzales resident, which led to widespread outrage and public protests. Mexican authorities felt it unwise to leave the settlers with a weapon. Colonel Domingo de Ugartechea, commander of all Mexican troops in Texas, sent a corporal and five enlisted men to retrieve the cannon that had been given to the colonists. Many of the settlers believed Mexican authorities were manufacturing an excuse to attack the town and eliminate the militia. In a town meeting, three citizens voted to hand over the gun to forestall an attack; the remainder, including alcalde Andrew Ponton, voted to stand their ground. According to historian Stephen Hardin, "the cannon became a point of honor and an unlikely rallying symbol. Gonzales citizens had no intention of handing over the weapon at a time of growing tension." The soldiers were escorted from town without the cannon.

Two Mexican soldiers were killed in the attack. The only Texian casualty was the bloody nose suffered by the man bucked off his horse. Although the event was, as characterized by Davis, "an inconsequential skirmish in which one side did not try to fight", Texians soon declared it a victory over Mexican troops. Despite its minimal military impact, Hardin asserts that the skirmish's "political significance was immeasurable". A large number of Texians had taken an armed stand against the Mexican army, and they had no intention of returning to their neutral stance towards Santa Anna's government. Two days after the battle, Austin wrote to the San Felipe de Austin Committee of Public Safety, "War is declared—public opinion has proclaimed it against a Military despotism—The campaign has commenced". News of the skirmish, originally called "the fight at Williams' place", spread throughout the United States, encouraging many adventurers to come to Texas and assist in the fight against Mexico. Newspapers referred to the conflict as the "Lexington of Texas"; as the Battles of Lexington and Concord began the American Revolution, the Gonzales skirmish launched the Texas Revolution.

The cannon's fate is disputed. According to the memoirs (written in the 1890s) of Gonzales Blacksmith Noah Smithwick, the cannon was abandoned after the cart's axles began to smoke during a march to San Antonio de Béxar to assist in Austin's siege. Smithwick reported that the cannon was buried near a creek not far from Gonzales. A small iron cannon was exposed during a June 1936 flood near Gonzales. In 1979, this cannon was purchased by Dr. Patrick Wagner, who believed it matched Smithwick's descriptions of the cannon used in the battle. The Curator of Military History at the Smithsonian Institution verified that Wagner's cannon was a type of small swivel gun used in America through 1836. The Conservation Laboratory at the University of Texas confirmed that Wagner's cannon had been buried in moist ground for an extended time period.

The Texians made a white flag depicting the cannon with the words "come and take it" above it and flew it during the battle.

There is a cannon on display in the Gonzales Memorial Museum that may have precipitated the battle.