The Confederate Civil War Monument is located in the Battle Grove Cemetery in Cynthiana, Kentucky. The main shaft is 22 feet tall, obelisk, is made of Italian marble with a step down design. The base is 3 feet tall and measures 4 foot 10 inches around and is made of lime stone. In all it is 25 feet tall with a Confederate flag draped over the top.

View of the Confederate Monument and Flag. 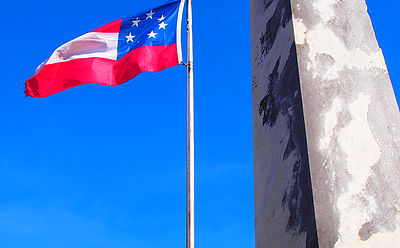 Graves of some of the Confederate Soldiers. 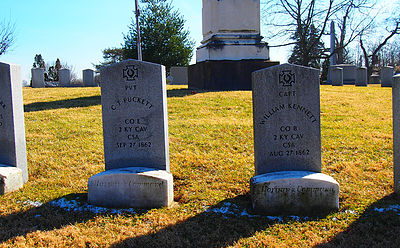 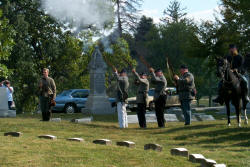 President Jefferson Davis doing a reading at the memorial. 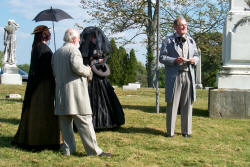 Confederate soldiers during the Reenactment of the Cynthiana Battle (2001) 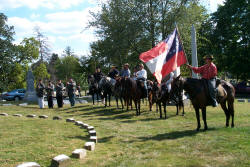 Another view of several of the reenactment participants. 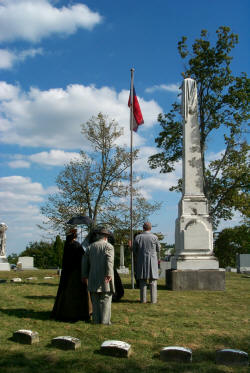 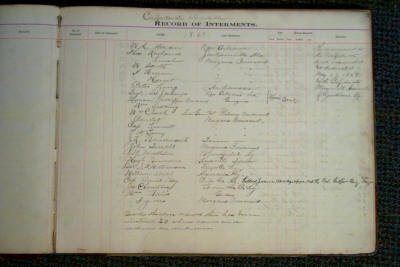 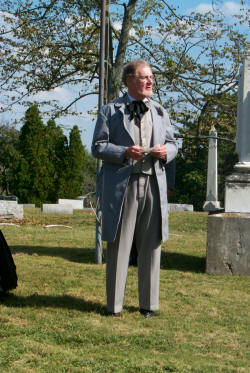 Inscription on the front of the monument. 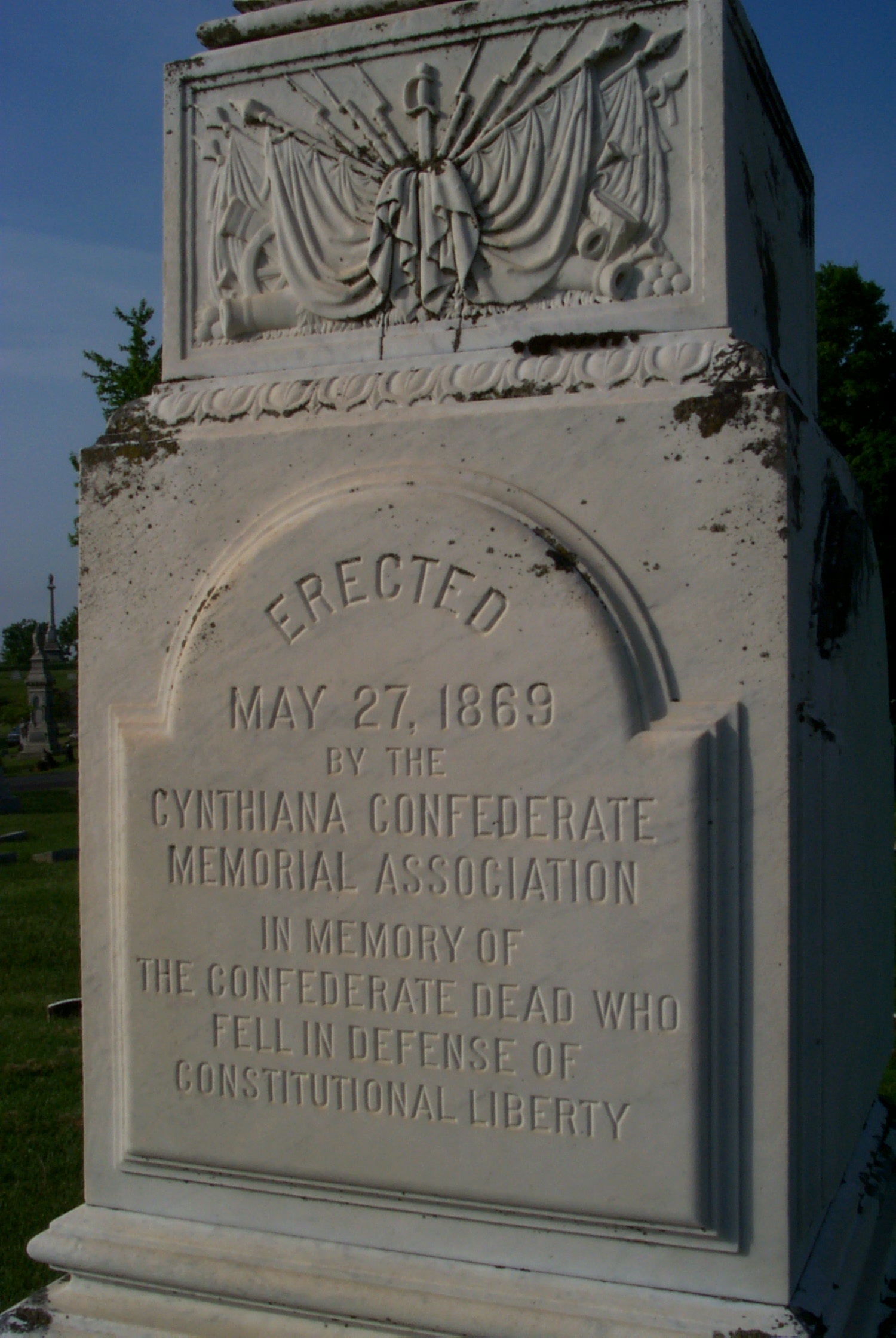 The Confederate Monument in Cynthiana Kentucky

It is widely believed that the Confederate Monument in Cynthiana Kentucky is the first ever erected Confederate monument.  It was manufactured by Muldoon & Company located in Louisville, Kentucky at a cost of $2,200.  The upper part of the base is inscribed with cannon, muskets, and swords all crossed.  Above that there is a palmetto leaf and olive leaf crossed also. The funds to pay for the monument was raised through holding tournaments, Thespian exhibitions, festivals and private donations from those that wanted to show respect for the men that died for what they believed was right.  Those behind getting the monument erected were from a monument association.  A.J. Beale, President, I.N. Muller and H.W. Shawhan were Vice presidents and C.W. West was Secretary.

In the beginning the monument was not inscribed because of persecutions by their friends, "the enemy".  This can be explained in part because during the Civil War many families and friends fought on opposite sides.  According to Mr. Beale (was also President of the monument association) who supplied information for the historical monument book, General Robert E. Lee was invited to the unveiling of the monument declined.  Mr. Beale says he has a copy of the letter framed and will gladly furnish a copy of it to those who ask.  Mr. A.J. Beale was a Confederate Army Captain of company D, Ninth Kentucky Infantry.

The monument is surrounded by the graves of 48 Confederate soldiers who died for a "lost cause".  These soldiers were moved from a place called Old Cemetery; during the move great care was taken to accurately record the soldier’s names even though 23 of the graves are unknown.  A local Historian and Geologist Charles W. Feix researched the names and made a list but still the 23 are unknown.  Each year there is an annual "Battle of Cynthiana reenactment" which is ended in a memorial ceremony at the monument.  They do reading from President Jefferson Davis, General Robert E. Lee and several other Confederate government figures.  It ends with the flag rising and salute.

The names of the soldier’s graves that encircle the monument, each of them are numbered.

The mayor of Cynthiana in the 1920’s John M. Cromwell wrote an article titled “Dedication of the Confederate Monument”.  It was published in the Cynthiana Democrat May 28, 1929.  Below:

I wonder how many individuals in Harrison County would answer “here” if the roll was called today of those who witnessed the dedication of the Confederate Monument on that beautiful day in May sixty years ago?  The writer was present, but scarcely of an age to appreciate the ceremonies, and can only recall the speakers’ stand and a vast concourse of people.

As I grew older, and became familiar with the inimitable style of Col. W.C.P. Breckinridge who delivered the dedicatory address, how often have I regretted that I was too young to appreciate it, and also that; seemingly, it had not been preserved to posterity.  It was therefore in the nature of a most agreeable surprise when I received my “Herald” on the morning of May 30, 1927, and learned that the address had been preserved, and was published for the benefit of the Cynthiana Joe Desha Chapter U.D.C., by special request of Mrs. C.A. Renaker.

At the same time was published a speech delivered by Mr. Breckinridge on the occasion of the decoration of the graves of the Confederate dead in the Lexington cemetery, May 26, 1868.  Both speeches teem with tender allusions to the heroic dead, hope for the living, and an unshaken devotion to the cause, so recently gone down in defeat, and withal, not one bitter word for those who had so lately been their foes.

One is also struck with the vein of fulfilled prophecy running thru both speeches.  An instance – quoting part of the closing paragraph of the Cynthiana speech – “In that future, numerous monuments will be erected to those dead; yes, every national cemetery, every federal monument, every titled officer, are memorials of our dead.  And as their histories recount the deeds of McClellan and Grant, and Hooker, they will do honor to our Lee and Jackson, and Johnson.  When that day comes, a great, happy republic, mighty in its perfect unity, will guard with omnipotent and pious care a true liberty.”

Early in 1867 Dr. A. J. Beale called a meeting at his office of Confederate friends and sympathizers in Harrison county, where an organization was effected looking to the erection of a monument as a fitting memorial to those fallen heroes, to be known as the “Cynthiana Confederate Memorial Association.”  The following officers were elected; A. J. Beale, President; H. W. Shawhan, Newton Miller, Henry Turton, Vice Presidents; Caleb W. West, Secretary; Frank M. Curle, Treasurer.

The trustees of the Battle Grove Cemetery donated a large and choice lot, and a campaign was immediately started to raise the necessary funds which met with ready response.  The contract for the monument was awarded to the Muldoon Company of Louisville at $2,200, and on May 27th, 1869 it was ready for dedication. Gen. Robert E. Lee and Col. W. C. P. Breckinridge were invited to participate in the dedicatory ceremonies, but Gen. Lee was unable to be present.  For a long time our monument was thought to be the first ever erected in honor of Confederate dead, but Mrs. Renaker now says that she believes there was a monument erected in Charleston, S. C., which antedates it [Read the text which follows].  The shaft is of Italian marble, 25 feet in height and four feet, ten inches at the base.

Immediately after the monument was set up the bodies of the Confederate dead were removed from the old cemetery and reentered around it in a circle.  Including the body of David M. Snyder who died in 1896, and who had requested that he be buried with his comrades, there are 45 brave boys who wore the gray awaiting the last trumpet on that beautiful spot.  Some of them from far distant states in the southland, seven different states being represented.  There are forty eight markers in all, the extra ones having been placed in order to complete the circle.  Twenty of these are marked “unknown;” quoting a line here from a Civil War poem by Marie Lacost – “Somebody’s waiting and watching for them, yearning to hold them again to their hearts” – pathetic thought, when we remember that they were never even to know the final resting place of their dear ones.

Few people, I imagine, are aware of the fact that more than a generation elapsed before the inscription was placed on the monument.  It was deemed wise not to do so at the time because the feelings engendered by the war at that time still rankled.  But the “happier times” as foretold by Col. Breckinridge were to come.  He said in referring to the absence of an inscription – “No inscription is engraved upon its entablatures – the furled banner of a lost cause drapes it in mourning and happier times must carve its mottoes.”  The inscription as it stands today reads:  Erected May 27, 1869 by the Cynthiana Confederate Memorial Association, in Memory of the Confederate Dead who fell in defense of Constitutional Liberty.

After some debate weather Cynthiana or Charleston’s was the first monument it is settled in the communications below.

John Cromwell followed up on a statement he made in his article detailing the events surrounding the dedication of the Confederate Monument in Battle Grove in a columnn entitled "It Would Seem That Ours Was First" which was published in the May 2, 1929 edition of the Democrat.  This is what he wrote:

It is a fact that our traditions die hard.  Having always been taught that the Confederate Monument in Battle Grove was the “first” to be erected in memory of Confederate Dead.  I was loath to accept the idea that a monument in Charleston, S. C., antedated it, so wrote the Hon. Mayor of Charleston for some information on the subject.

I had a prompt reply from him informing me that he had turned my letter over to Mrs. J. S. Rhame, President of the U. D. C. for answer. Soon I had the reply, which appears below:

Your letter in regard to the date of a Confederate monument in Charleston has been handed to me to answer by Mrs. Sumter Rhame.

I have these dates from the report of the Ladies Memorial Association of Charleston, South Carolina.

I appreciate your interest in this especial part of Confederate Memorial work.

Our Monument was dedicated May 27, 1869; but here we find that those noble women of the old “Palmetto State” were early in the field.  All honor to them that they were, at least, the first to organize an Association to commemorate the Confederate Dead.