This small headstone marks the location where Dr. Josiah S. Weiser was shot, an event which led to the Battle of Big Mound on July 24, 1863. This battle saw the defeat of the Santee and Teton Sioux Indian tribes by federal troops led by Brigadier General Henry Hastings Sibley. The Sioux were led by Inkpaduta. The battle resulted in the deaths of three Union Soldiers and 13 Sioux. 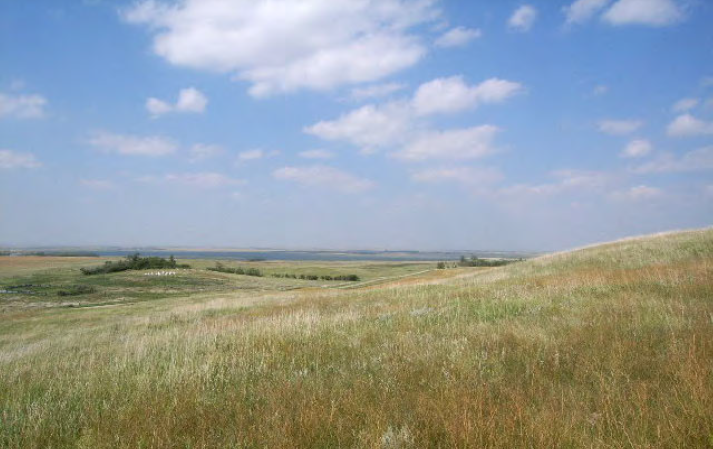 A photo from the State Historical Society of North Dakota showing the granite headstone of Dr. Weiser.

After a Santee Sioux uprising in the Minnesota River Valley during August of 1862, Brigadier General Henry Hastings Sibley set out with troops from Fort Ridgely, Minnesota for the Dakotas to deal with the Santee Sioux.  In the time between the initial uprising and the battle, The Santee Sioux had joined forces with the Teton Sioux.  Finally on July 24, 1863, after a day of marching, some of Sibley's returned saying they saw a large Native American camp just a few miles away.  Sibley decided to set up camp at a salt lake nearby and ordered his men to entrench it for their safety.1

While the men were setting up the camp, a group of several Native Americans approached showing signs of friendliness.  Sibley had scouts stationed about 300-400 yards away from the camp, and they were the first to come in contact with the Native Americans.  Shortly after that, Surgeon Josiah S. Weiser of the 1st Regiment Minnesota Mounted Rangers made his way to the group that had assembled.  Moments later, Weiser was shot and killed by one of the Sioux.  The scouts immediately tried to kill the attacker but were unsuccessful, and he escaped.

Following this scuffle, Native Americans who had taken cover in the surrounding ridges began their attack. Sibley's troops broke up into detachments and went to where the Native Americans were. Sibley took some more of his men and headed for the "Big Mound" that was located across a ravine from their current location. Sibley and his men opened fire on the Natives located in the ridges in an attempt to remove them.  Eventually, the Sioux were dislodged with artillery and forced to flee.  The infantry and artillery pursued them in a running battle that lasted the rest of the day.  Right before dark, the soldiers discontinued their pursuit and returned to camp on previous orders.  The Sioux forces were left battered and broken.1  This skirmish led to a week of small battles that resulted in the Native warriors being forced west of the Missouri River.