Thomas Mifflin (1744-1800) will always go down as an important man in Pennsylvania's history. Mifflin starts his career serving on the Continental Congress before and after the Revolutionary War. At one point he was also the presiding officer of the Continental Congress and the first president of it to be officially recognized by Great Britain. Thomas Mifflin also played a role in the Revolutionary War. He was the army's first Quartermaster General and was eventually promoted to the rank of Major General. Perhaps his most memorable posts include the 7th and final President of Pennsylvania and the distinction of being the first Governor of Pennsylvania. Thomas Mifflin now rests as marked on the map at the Holy Trinity Lutheran Church in Lancaster City.

A portrait of Thomas Mifflin. 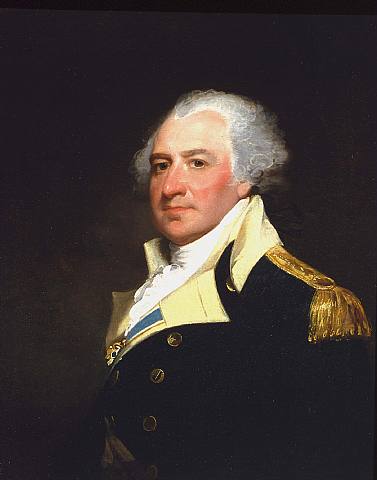 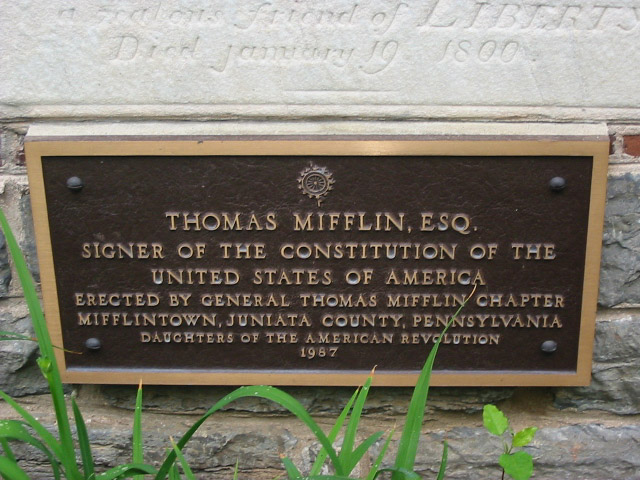 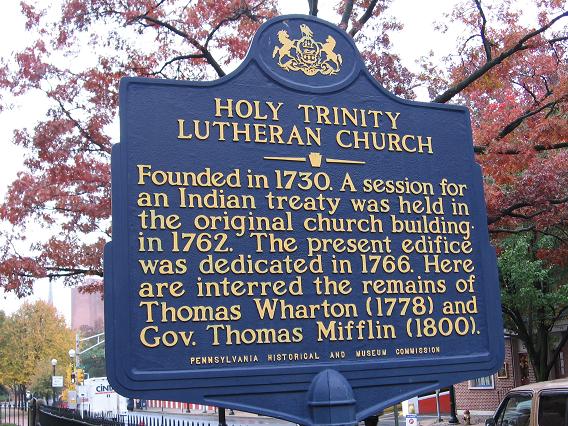 Thomas Mifflin was born in Philadelphia in 1744 to John Mifflin and Elizabeth Bagnall. For generations Thomas and his family were all Quakers. He eventually attended the University of Pennsylvania and graduated from it in 1760. Afterwards, Mifflin became a merchant and got married to Sarah Morris in 1765.

Early in the Revolutionary War, Mifflin left his post in the Continental Congress to join the war. He was however expelled from the Quakers because of their pacifist ways. He was initially commissioned as a major, but moved up in rank to Quartermaster General for the army. It is important to note that Thomas Mifflin has the honor of the being the United State's first quartermaster general. It is said that Mifflin was a good quartermaster, but failed to properly supply the Continental Army stationed at Valley Forge. It is also said that Mifflin would have rather been on the front lines than supplying the army. He was eventually promoted to major general for his leadership skills in the battles of Trenton and Princeton. After his promotion Mifflin, was commissioned to join the Congressional Board of War because of his military service. He spent from 1777 to 1778 on the board until he eventually rejoined the army. Mifflin didn't have much of an active role in the army at this point and eventually resigned mainly due to accusations about him during his time as quartermaster.

Thomas Mifflin played a pretty major role in politics for both the United States and for Pennsylvania. He was a member of the Pennsylvania Provincial Assembly from 1772 to 1776. The assembly possessed the role of state government for the colony of Pennsylvania. Mifflin was also a member of the Continental Congress from 1774 to 1775. It is important to note that he left in 1775 to fight the British. Mifflin also served as part of the Continental Congress from 1782 to 1784. For seven months, around the end of his time in congress, he became president of the Continental Congress. After the war, as president, Mifflin had trouble getting enough delegates from the now states to be in congress. He was eventually able to ratify the Treaty of Paris which was the official peace treaty between the United States and Great Britain. Afterwards, Mifflin became the first president of congress to be officially recognized by Britain. In 1787 Mifflin had the honor of being a delegate in the Constitutional Convention. His signature is on the constitution along with most of the other delegates.

Thomas Mifflin lived a full life that seems full of adventure and politics. Mifflin helped establish documents from the U.S. Constitution to the 1790 Pennsylvania Constitution. Not to mention, he holds many honors such as first P.A. governor and the first United Stated Army Quartermaster General. Mifflin is buried in Holy Trinity Lutheran Church in Lancaster. The cemetery and church are very old and finished completion in 1766. Mifflin is buried in the same cemetery as Thomas Wharton, the first President of Pennsylvania. There is a marker on Duke Street in Lancaster commemorating the two.