Dedicated in 1899 and named after the great Onondaga leader who helped create the Iroquois League, Hiawatha Hall is the oldest structure on the historic campus of Haskell Indian Nations University. Haskell was established in 1884 as a boarding school for Native American children that reflected the goal of the United States government to eradicate the cultural, religious, and communal ways of Native American tribes through assimilation. While many of the first students were forced to leave their families and perished in the early years of the school, Haskell changed over time and is now an accredited university that is supported by the federal government and attended and led by Native Americans.

This is an older picture of Hiawatha Hall, which has now been renovated. 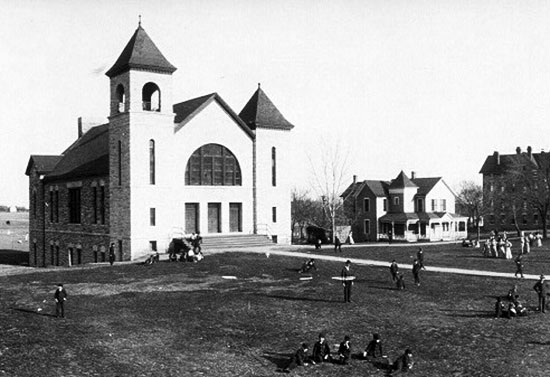 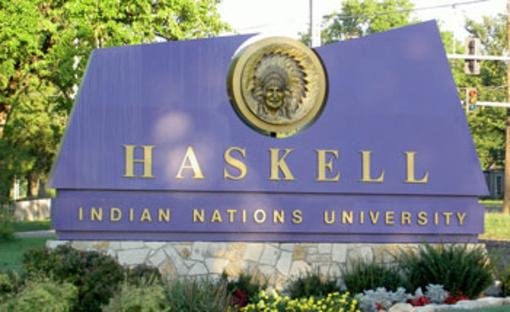 This is a picture of the students attending the university in 1908. In the background, you will see the first buildings on the site.

The United Methodist Church provided the funding for the construction of this limestone building as a campus chapel. Despite being named as a National Historic Landmark for serving as an auditorium for over a century, the building suffered neglect and has been closed since 2005. Thanks to a multi-million dollar commitment to restore this and other historic buildings on the Haskell campus, crews have worked to restore the building in recent years, with a new roof being added in 2017.
The university itself has changed greatly since its opening in 1884. It has gone through curriculum, funding, and civil rights changes. The university is now a state-funded and accredited university for Native Americans to attend. Furthermore, the change in rights have also made a huge impact on the school.
Before 1927, the boarding school acted like a military camp for children as they were forced to march to school and church, cut their hair, and the staff at the school took away all of the children’s personal possessions. The children were also taught English, which is the only language they were allowed to speak, as well as different skills based on gender. The boys were taught skills in tailoring, by making their own uniforms, wagon making, harness making, shoe making, and in Blacksmith. The girls, on the other hand, were trained in general homemaking skills, such as cooking and sewing. Furthermore, the majority of the food produced for the school was grown on the Haskell farm and the students were expected to help in growing, harvesting, and preserving the farm food for them to consume later.
After 1927, the school was transformed into a national, state-funded school with accredited education and athletics department and underwent some reconstruction.