Completed in 1857, Christ Church Cathedral replaced a previous church that was built at this location between 1837 and 1838. Like many of the other churches that were once located in the area, the congregation almost sold this property to developers several different times; however, even though many of the parishioners had moved away from the city center, members ultimately opposed the sale of the building. Today, the Cathedral serves as the ceremonial seat of the Episcopalian Diocese of Indianapolis. The bishop of Indianapolis presides here and oversees 46 congregations throughout central Indiana. The cathedral was added to the National Register of Historic Places in 1973.

The last of five churches that once stood within a block of Monument Circle, Christ Church was completed prior to the Civil War. 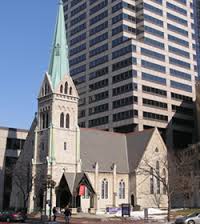 The "Little Church on the Circle," completed in 1858, has since been dwarfed by the surrounding buildings. 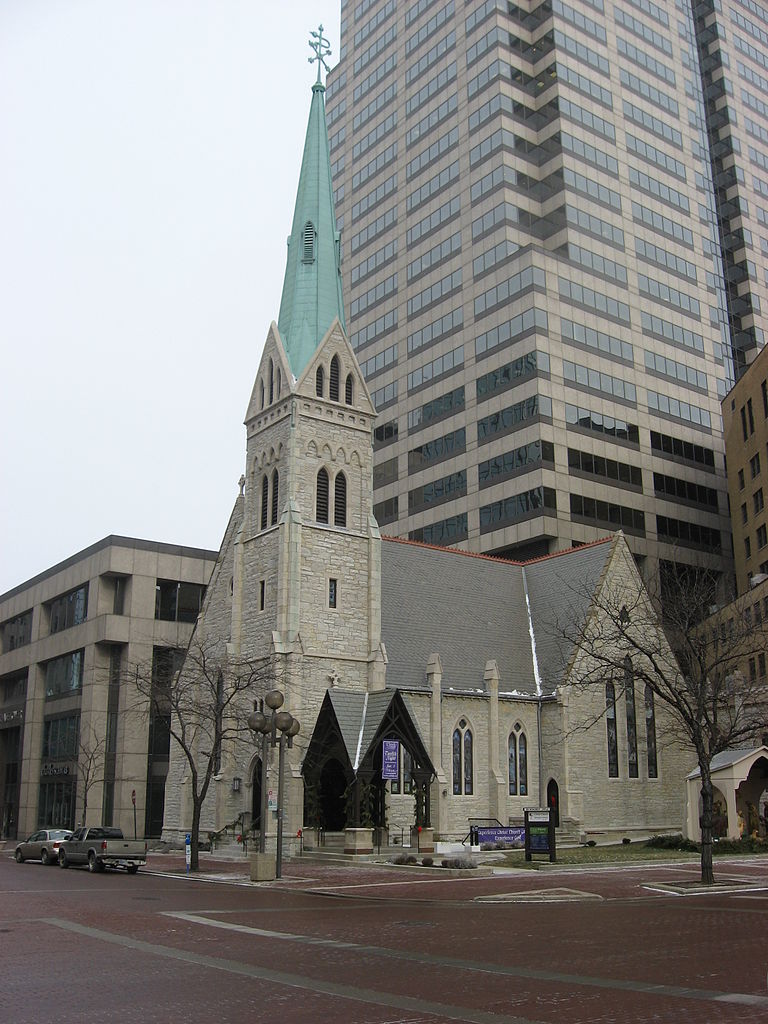 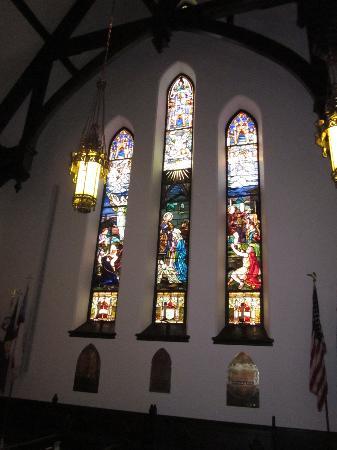 The organ loft on the cathedral's west side. 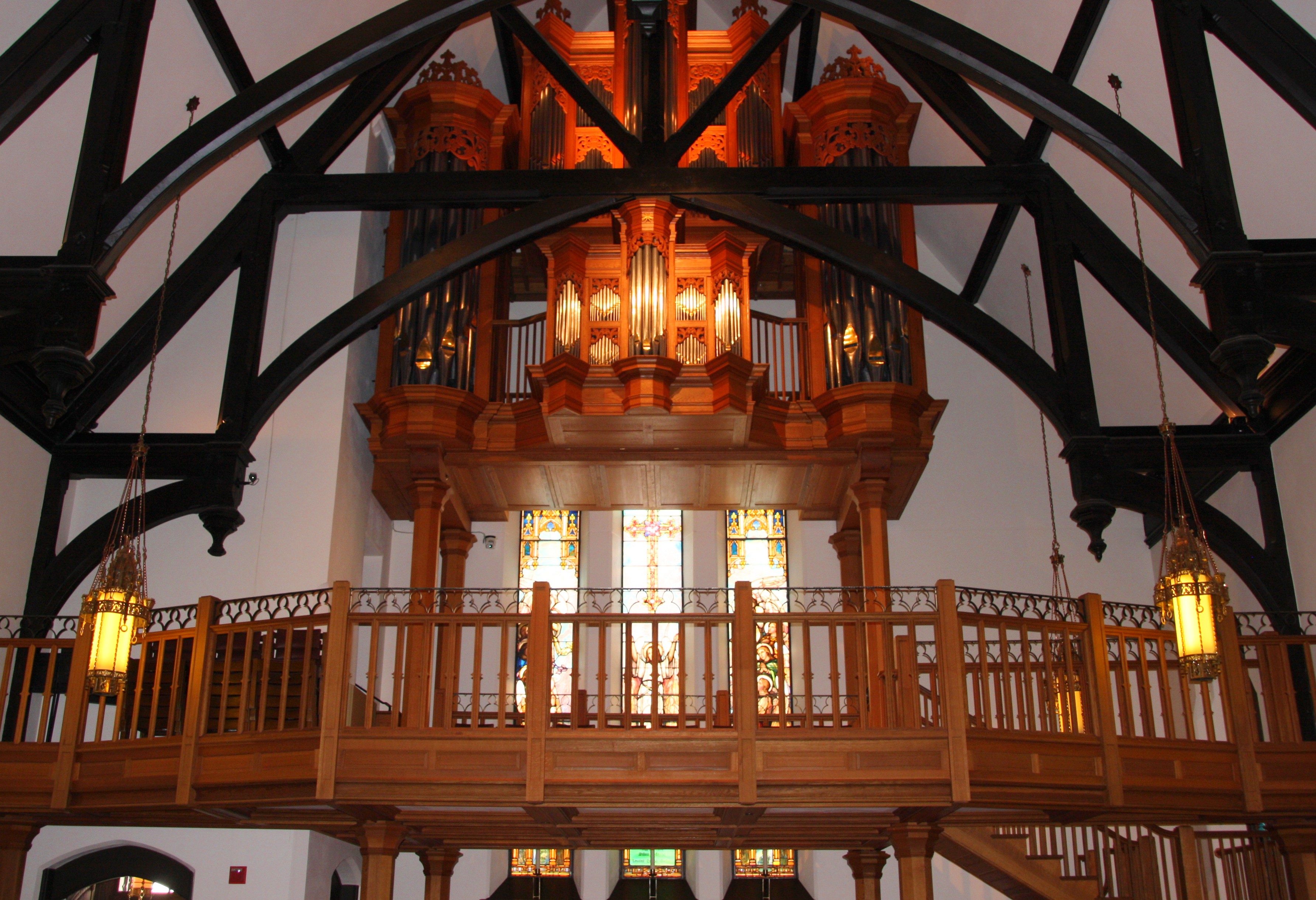 This photo was taken of the cathedral around 1875, not long after the spire was added in 1869. 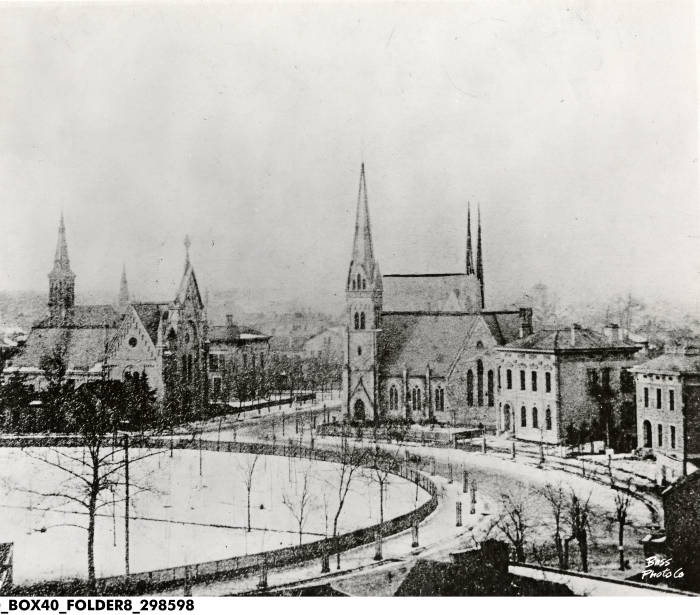 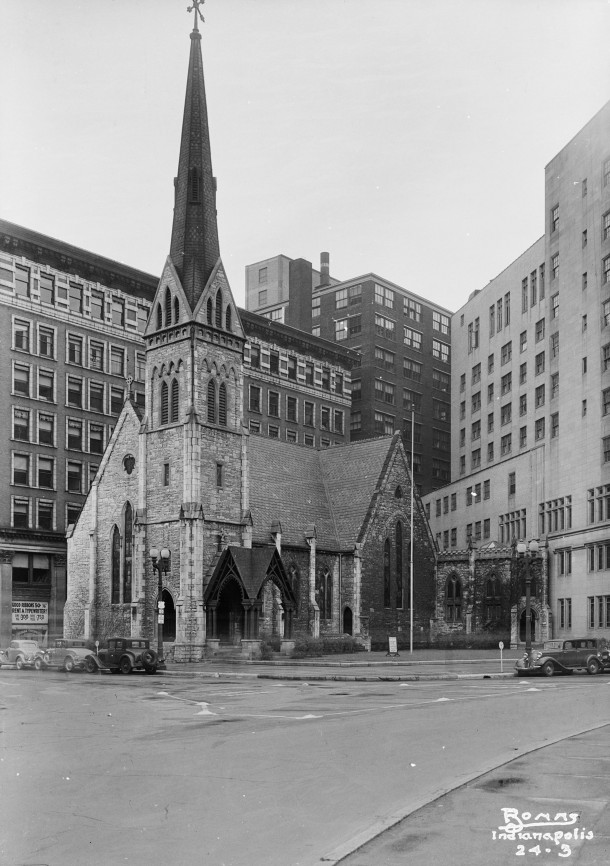 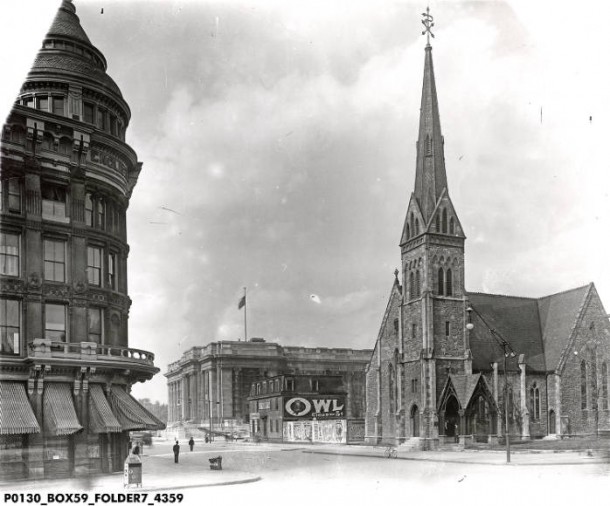 The parish was founded in 1837 with just 30 individuals. However, within 20 years, it had outgrown its original wood-framed church, and construction on a new building began after the old church was sold to the Bethel AME Church and transported to Georgia Street. Unfortunately, that church was destroyed by a fire in 1862. When the cathedral was completed in 1858, it was one of five churches on Governor’s Circle, as it was then known, and today, is the last one still standing. It is the oldest church building in Indianapolis and Marion County that has remained in continuous use.

The cathedral was designed by well-known and Irish born architect William Tinsley in the Gothic Revival style. Its original red brick exterior was soon replaced by limestone. Its first official service occurred in May of 1859, and the structure has been expanded and renovated numerous times since that date. The spire was added in 1869, the Episcopal residence in 1871, and a brick Sunday school building in 1876. Its interior was extensively renovated in 1900 with the addition of a rood screen, stained glass windows, and an exterior porch. In 1927 its basement was excavated and renovated for educational and recreational use. Various other renovations took place in 1936, 1954, 1973, and 1983.

Since the late 19th century, the congregation of the “Little Church on the Circle” has considered relocating outside the downtown area, and numerous corporate interests have made offers to purchase the valuable land on which it sits. However, congregation members, including famed pharmaceutical company founder, Eli Lilly, have fought to keep the cathedral at its current location, and so it has. Membership at the church has ebbed and flowed, peaking in 1963 at over 1,100.

The church has always been known for its dedication to supporting the less fortunate through fundraising and charitable efforts. Its social activism increased under the leadership of Paul Moore Jr., who served as Dean from 1957-1964. The congregation’s most successful and popular fundraiser is its annual Strawberry Festival, which beginnings are as old as the cathedral itself. Money raised is then donated to various charities; local, national, and international.

The cathedral is also known for its music. It has two professional choirs, the Choir of Men and Boys, whose predecessor began in 1883, and the Girls’ Choir, which was founded in 1945. It also has a volunteer choir known as the Christ Church Singers. These choirs perform during regular Sunday services. The choirs can be accompanied by one of three organs within the cathedral, the chancel organ, which was built in 1989 by Helmuth Wolff, the gallery organ, built-in 1991, and the Frederick E. Weber Memorial Continuo Positive Organ added in 1996.

The History of Nine Urban Churches. Indianapolis, IN: The Riley-Lockerbie Ministerial Association of Downtown Indianapolis.