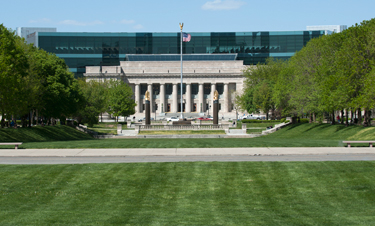 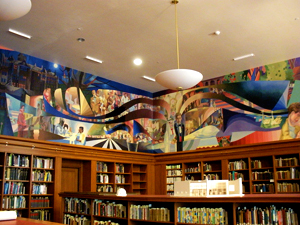 The Indianapolis Public Library (formerly known as the Indianapolis-Marion County Public Library) is the public library system serving the citizens of Marion County, Indiana, United States and its largest city, Indianapolis. The library was founded in 1873 and has grown to include a Central Library building, located adjacent to the Indiana World War Memorial Plaza, and 22 branch libraries spread throughout the county. The library attracts over four million visitors each year and circulates nearly 16 million items. The library's mission is to enrich lives and build communities through lifelong learning. Its vision is to be a center of knowledge, community life and innovation for Indianapolis.
The Central Library building was designed by architect Paul Philippe Cret, (with Zantzinger, Borie and Medary) and completed in 1917. A complete historic renovation and a major addition to the library was designed by Woollen, Molzan and Partners. The newly renovated Central Library building opened on December 9, 2007, ending a controversial multi-year rebuilding plan.