The Putnam Theatre was originally built as a vaudeville theater in 1914. The theater was purchased in 1977 by the Mid-Ohio Valley Players Inc., a group of local performers and artists from Marietta, Ohio. The theater showcases the group’s talents year-round and brings the community together through shows and youth outreach programs.

The thater when it was known as the Putnam Theater 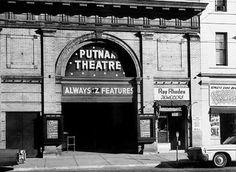 The front of the Putnam Theater 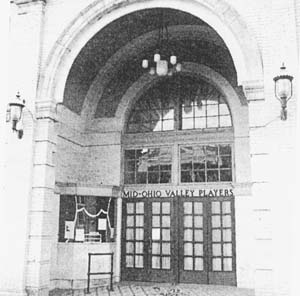 The entrance to the Mid-Ohio Valley Players Inc. Theater 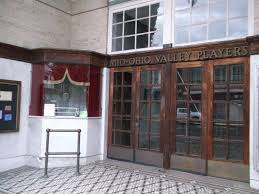 In 1959, the “Valley Players” began performing one-act plays in the Washington Elementary School auditorium. The first full-length pay the group performed was "The Solid Gold Cadillac." As the group grew, their venues continued to change. The troupe performed at the Masonic Park Pavilion in Devola from 1965 to 1968, when they found a permanent home in the Harmar Chapel. For four years in the 1970s, they performed at the Marietta High School auditorium, the Marietta Country Club, and the local Ramada Inn.

After raising funds through a community fundraiser in 1977, the Mid-Ohio Valley Players bought the Putnam Theatre (generally known as “the Cinema”), built-in 1914 as a vaudeville theater. The first performance in the theater was "Carnival" in the summer of 1977. The performers now had a permanent home, and a local landmark was preserved.

The Mid-Ohio Valley Junior Players was founded in 1981 enabled young people to get involved in their community through this outreach program. Additionally, the Mid-Ohio Valley Players Youth Theatre enabled teens and young adults to perform and express themselves through performance.

Additionally in the 1990s, the group did dinner theatre at the Lafayette Hotel. Since then, the Players have worked to restore the theater to its former glory and to keep it up-and-running. Today, the Mid-Ohio Valley Players continue to perform, occasionally performing their original works. Original works include Simon Farrel's "Queen of the River," "The House on Shawnee Street," and "The Portrait."