For four days, this building served as the First Territorial Capitol of Kansas. At this location in 1855, members of territorial legislature met to discuss issues related to the formation of the territory, including whether Kansas would permit or prohibit slavery. Territorial governor Andrew Reeder selected this location in hopes of avoiding potential intimidation from proslavery residents along the Missouri border. However, owing to the fraud perpetrated by proslavery men in the previous election, and owing to the proslavery sentiments of many of the first settlers in Kansas communities such as Leavenworth and Atchison, most of the elected officials were sympathetic to proslavery arguments. The antislavery members of the first legislature were overruled and the seat of government was moved to Shawnee Mission, only miles from the Missouri border. Although Free Soil voters would eventually prevail and Kansas would join the Union as a Free State, the legislature that met in Shawnee Mission and later in Lecompton made slavery legal in Kansas Territory. Today, this historic site remains adjacent to the post at Fort Riley and serves as a museum. Visitors can learn about Bleeding Kansas and see important pieces of the state's history in the Territorial period and the Civil War.

Painting of the original stone structure where the first territorial legislature met. 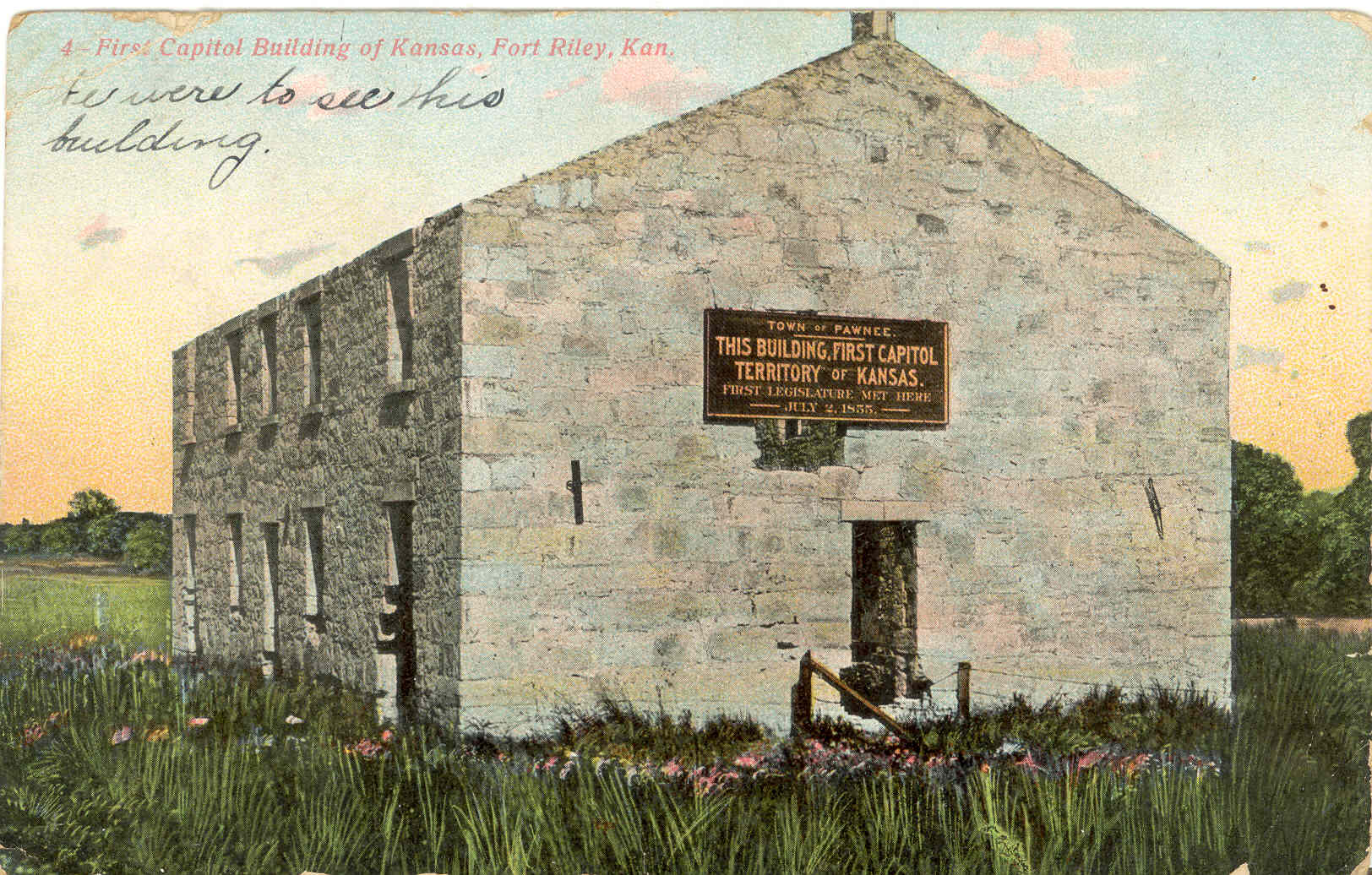 An early photograph of the building still under construction. 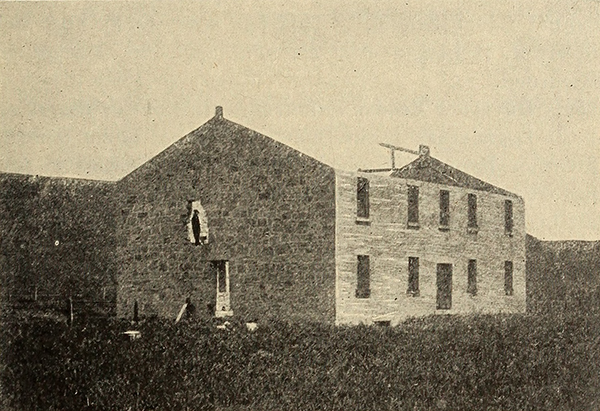 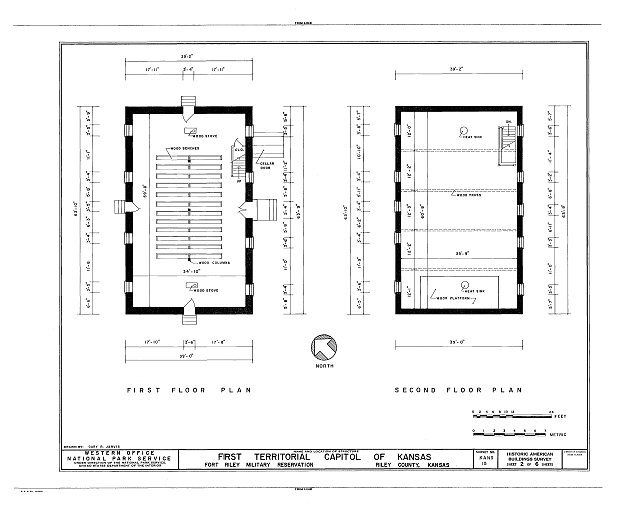 Front view of the present day building and memorial plaque. 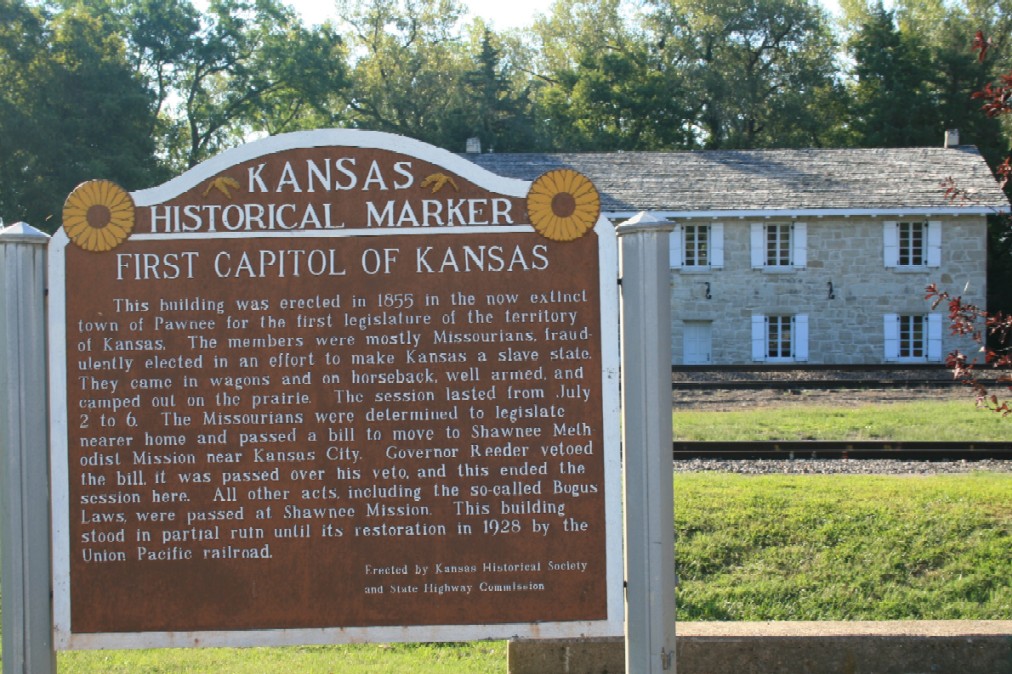 Rear view of the building in present day. 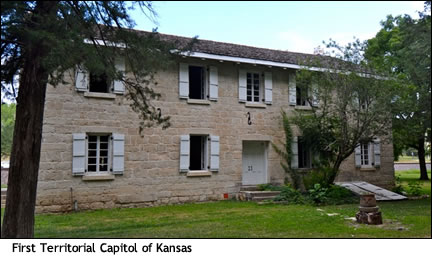 The restored upper level of the building where the council and senate were seated for a short time. 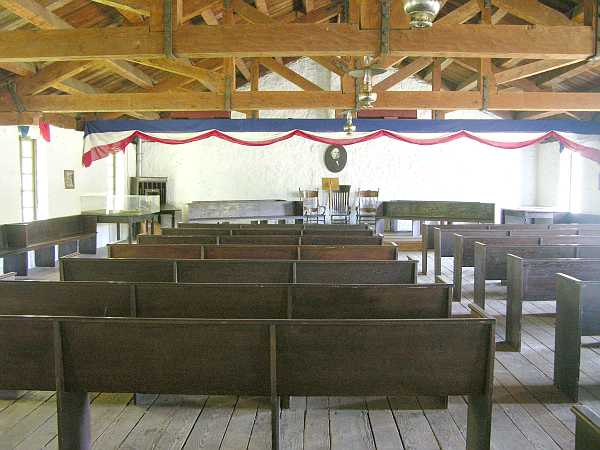 In the summer of 1855, members of Kansas's first territorial legislature traveled to the northeastern town of Pawnee, just outside of the Fort Riley military installation, to discuss matters that included the new territory's stance on slavery. Governor Andrew H. Reeder had previously ordered the construction of this two-story stone building to hold the meetings of the territorial legislature. By constructing the building here, he hoped to avoid outside influence from bordering pro-slavery states--an important provision given the fraud perpetrated in the election of delegates as many of the votes cast were from Missouri residents. Although construction had been underway for months, the building was not yet complete which allowed pro-slavery men the opening they were looking for in suggesting that this building be abandoned in favor of a site further east where the majority of Kansas residents lived.

One member wrote in a letter to the Atchison Squatter Sovereign that the 40 x 80-foot building "had neither floor nor roof" upon his arrival on Saturday, June 30. He continued in the letter to say that laborers continued to work all weekend, and by the morning of Monday, July 2, 1855, the members were able to hold their first session according to schedule in the barely-finished structure. The house chamber occupied the lower level while the second story was to be the home of the governor's council or senate. Some of the finishing touches of the building were still incomplete, and members debated and passed legislation with no doors between the upper and lower levels.

The legislature was made up of mostly young men, with only five of the thirty-nine members being over the age of fifty. Eleven of the men were under the age of thirty. The vast majority of the officials were slavery supporters, and some of the men elected on March 30, 1855 owed their positions to the illegal votes cast by Missourians who had crossed the border to influence Kansas politics. Because of the fraudulent methods by which some of the legislators had secured their office, anti-slavery citizens of Kansas began to call this group the "bogus legislature" and the laws they passed were called "bogus laws."

Since most of these members came from the bordering towns and showed heavy support for the proslavery cause, they quickly voted to move the seat of government further east. On July 4, 1855, only two days into their first session, the territorial legislature passed a bill to temporarily move the seat of government to the Shawnee Methodist Mission. The mission was near the Missouri border and was part of the pro-slavery men's campaign to discredit the moderately anti-slavery governor. Two days later, the governor vetoed this bill on the grounds that the legislature had overstepped its boundaries afforded to it by Congress. Despite his best efforts, both houses passed the bill over the governor's veto and the legislature met next at Shawnee Mission on July 16, 1855.

This building only served as Kansas's seat of government for four days, but the structure itself was sound and used as a warehouse and later served as a carpentry shop. In 1901, local history supporters and the Kansas Legislature began efforts to preserve the building as a historical site. In 1927, the state set aside funds in the budget for maintenance and repair of the building. The structure was listed by the National Register of Historic Places in 1970 and stands today as a state history museum.