Devoted to the display of naval artifacts, models, documents and fine art, the National Museum of the United States Navy at Washington Navy Yard chronicles the history of the United States Navy from the American Revolution through present conflicts. Interactive exhibits commemorate our Navy’s wartime heroes and battles as well as peacetime contributions in exploration, diplomacy, navigation and humanitarian service.

A view inside the World War II exhibit 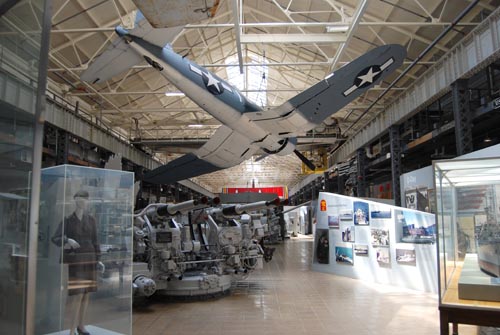 The Naval Museum and the nearby Cold War Gallery feature multiple exhibitions. The Naval Museum features exhibits about submarines, the American Revolution, the Civil War, other 19th-century wars, the Spanish-American war, Polar exploration, navigation, World War I, 3 exhibits about World War II, and the Korean War. The museum is the flagship of 10 official navy run naval history museums across the country. About 100,000 people a year visit the museum, and admission is free. The museum is located on an active military base, so for visitors to enter, they must enter at a specific entrance and provide ID. In October 2020, a new campus for the Naval Museum was announced with a planned opening date of 2025, which will be easier to access.

Currently closed due to COVID-19