A lavish hotel built in 1926, the Camlin serves as a reminder of Seattle's rapid growth during the economic boom throughout the Pacific Northwest during the early 1900s. The Camlin was one of many luxury hotels built in this part of the city, providing quick access to many of the finer theaters as well as downtown clubs and restaurants that willingly flouted the nation;s prohibition against alcohol. The hotel;s early history includes an interesting scandal, as the funds used to finance the hotel construction were not obtained legally. The hotel's history follows that of downtown Seattle and other metropolitan luxury hotels that nearly closed their doors following the rise in discount hotels that cater to interstate highway travelers. The hotel is not operated by WorldMark.

The Camlin Hotel was completed in the 1920s and continues to operate as a hotel. 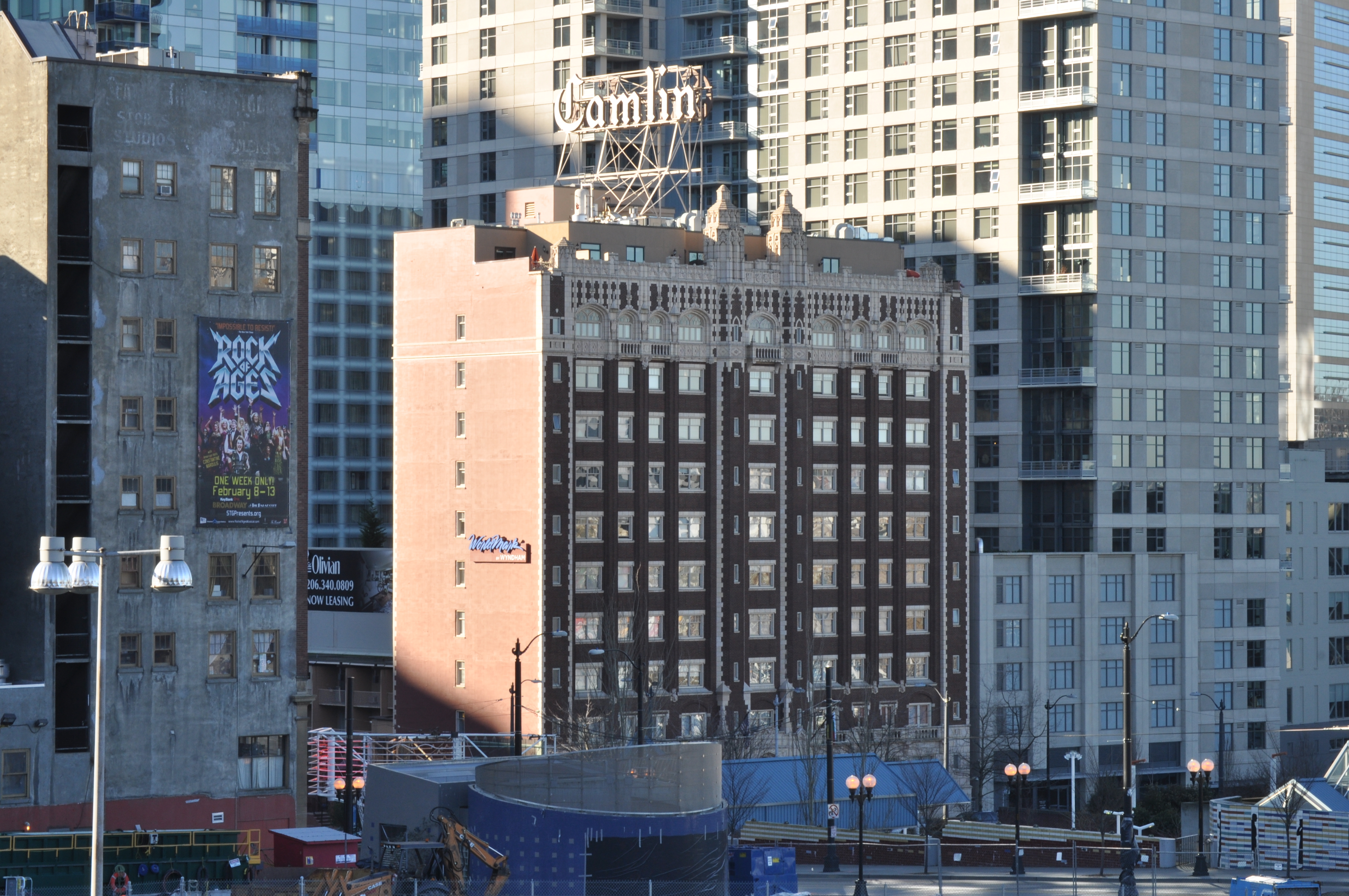 Seattle's building permits increased every year from 1918 until 1926, demonstrating the economic boom in the Pacific Northwest at the time of the hotel's completion. The Camlin Hotel was developed as a residential hotel in the heart of the city's theater district. At the time of its completion, five theaters were within four blocks of the hotel. The hotel was built by Edmund Campbell and Adolph Linden, who both committed fraud to finance the hotel. The two men were were later convicted for this crime.

The Camlin catered to wealthy urbanites with its mahogany woodwork, plush carpet, Italian artwork adorning the walls, as well as fireproof reinforced concrete construction with a brick and terra cotta exterior. As well, The Camlin offered its guests two elevators, a phone in each suite and wiring suited for radio, and dinettes existed in some of the rooms. Eight rooms existed on the first floor, two apartments on the top floor and every other floor contained nine rooms.
The most noteworthy room came to be known as the Cloud Room, which offered guests 360 degree views of the city. Although not originally part of the plans, renovations in 1942 including reducing room size as to increase the total number of rooms, as well as creating the cocktail lounge -- the Cloud Room. The top-level lounge hosted famous acts such as Frank Sinatra, Dean Martin, Elvis Presley, and Miles Davis. The hotel and restaurant/lounge came to be known as one of the elite places in Seattle.
Background on Adolph Linden and Edmund Campbell
Adolph Linden was born in 1889 in Des Moines, Iowa. His father served as a Baptist preacher and moved the family to Seattle when Adolph was in high school and promptly acted as the pastor of a Swedish Baptist Church  However, Adolph chose to bank as a profession, eventually finding employment with the Puget Sound Savings and Loan Association. He met his eventual wife there, and her father happened to be the President of the Puget Sound Savings and Loan in 1916. When Linden's father-in-law died in 1923, Linden assumed control of the company.
Meanwhile, Edmund Campbell, who was 19 years older than Linden, was vice president and secretary of the Puget Sound Savings and Loan Association in 1923. The two ventured into numerous business deals, such as providing loans to Oklahoma oil ventures and, in 1925, creating The Camlin Investment Company. However, to get the new investment company off the ground, the two men borrowed  $865,988 from Puget Savings, which was eventually used to build the hotel.
When an independent state supervisor discovered the method for obtaining the funds, the two men were ordered to make restitution. However, failing to do so, Adolph Linden was arrested for grand larceny in 1931 for embezzlement and sentenced to five to fifteen years at the Walla Walla State Penitentiary. Edmund Campbell was charged with the same crime in 1938.

Pierce, Kingston, J. Head in the Clouds: The Two Men Behind the Camlin Hotel May Have Let Big Dreams Get Ahead of Their Reason. Pullman, Washington: Washington University Press, 2003.